Chris Hall is someone who loves a challenge. To this day, Chris’s challenges have included riding 107km a day for 107 days, racing three national 24-hr time trials, riding across Australia and racing in the Silk Road and Atlas mountain races. Along the way, Chris has raised over £20,000 for the PACE centre alone.

We spoke to Chris about his life in cycling and his most recent challenge, #107TDF, and his motivations to ride and race. Here is some of his insights and answers to our questions. 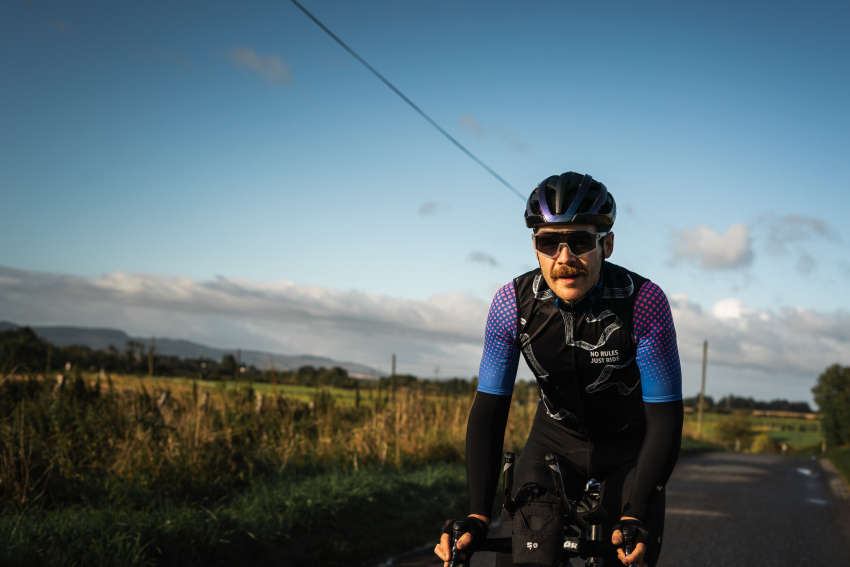 How did you get in to cycling?

'I went to university next to the Millennium Dome, called Ravensbourne, and along the Thames from the dome there is a really great cycle lane. I used to go and ride from my Uni, all the way past Woolwich, turn back and go the opposite way into town until the cycle lane just stopped. I just used to do that. It wasn’t far, but I did that as a destress. It became an easy mode of transport around London, quicker than driving anywhere, quicker than the tube and obviously walking, and I progressively realised I quite enjoyed it.'

'One of my oldest friends from school, a guy called Ant, we started riding together a bit. He was riding with a club called Ripcor, which is a club based out Windsor way. The reason why Ripcor set up was to fundraise for the PACE Centre.'

__Pace is a children's charity whose work transforms the lives of children and young people with motor disorders. __

Chris's first challenge with Ripcor saw him cycling across Romania in aid of the PACE centre:

'It was my first time going to a country to cycle up mountains – we basically road from the north-western point of Romania, across the mountain range to the south-eastern point. We went through Transylvania, did the Transfăgărășan – through a town Prince Charles goes to all of the time, it was quite weird. It was also the first introduction to gravel riding as well.'

'PACE did this ride because they have an association with a school out there and then I guess from then I knew I wanted to do more things for PACE as I had seen the work and understood it.'

'The next thing I did was ride around Richmond park for 24 hours. I mean, at the time, I hadn’t known anyone who had done that. It was really logical, there’s a park, it's safe. I did it, I didn’t go as far as I have gone in national 24s (national 24 hour time trials), but I didn’t feel that fucked at the end of it, which opened my mind to the idea of 24 hour racing.' 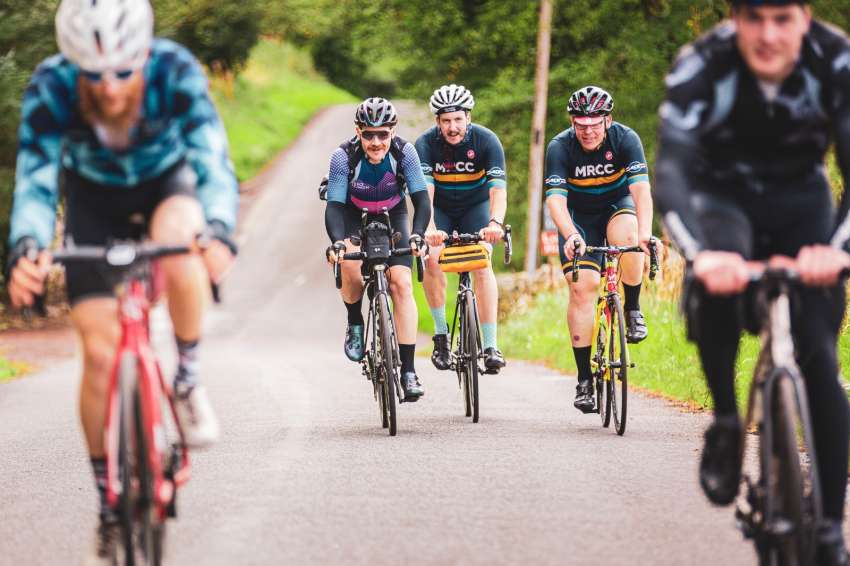 What sparked your interest in endurance racing?

‘The thing with these races, is that I don’t really enjoy them. I think some people want to see you’ve done these kinds of races as proof you’re legit, if that makes sense. To see how you fair against other people.'

'I’ve been so unlucky with Silk Road and Atlas Mountains’ races, both of them I’ve crashed out of. I wouldn’t say riding off-road is my biggest strength. I quite enjoy that different aspect and challenge. Silk Road was out of my control. Basically, the piston in the brake calliper cracked, and that was it. I had no front brake for the rest of the race. I filed the cable guides from the rear brake, mounted the rear brake on the front, because obviously the front brake is nicer to descend with. Down to one brake and I was like 'it’s not safe to continue'. I was pretty pissed off about that one. The Atlas Mountains… Basically I would say it’s not a gravel bike race, it’s a mountain bike race. Its super, super technical. I did it on a gravel bike and just wiped out quite badly… there was a lot of blood. I was wearing a big down jacket and the whole arm was just shredded, bleeding feathers everywhere.’ So yeah, I have a bit of gripe with that one, I want to go back, but I want to do it on a mountain bike.’

Can you explain what your most recent challenge, 107TDF, involved? Are there any standout moments?

'The first 107 challenge was 107km for 107 days. The significance of the number was that PACE look after 107 kids and their families. That was the hardest challenge I have ever done, until this one.'

'This latest challenge was effectively riding the length and breadth of the UK, starting here at my flat in London, riding to Land’s End, from Land’s End riding up to John O’ Groats, from John O’Groats the long way back to London hitting Lowestoft, the eastern point of the UK, and finally riding back to my flat in London.'

'The challenge was to ride 107 miles for every day of the Tour De France, that coincidentally meant riding the UK. It wasn’t what I had initially planned to do, but I had it flagged in my head to do something for PACE this year with it being the 107th Tour De France.'

'I intentionally made the route as brutal as I could. I made sure I went up some of the toughest climbs in the UK, that I was riding off-road, on roads, down the side of busy A-roads, which is mentally another challenge, and all of these different aspects. Quite frankly people want to see you suffering – if it’s a challenge for a worthy cause like PACE.'

'The first five days were five of the hardest days I have ever had on a bike. Down to Land’s End and back out to Bristol. The undulating relentless climbing in the south-west, stunning but it is literally that, if a climb is not steeper than 20%, it wasn’t a climb. It’s relentless.'

'After the first five days I remember getting into Bristol. I was just an absolute wreck, and I remember thinking, ‘I don’t know if I can do this’. I just had to do it. I never doubted if I would finish, I doubted how good I would feel by the end.' 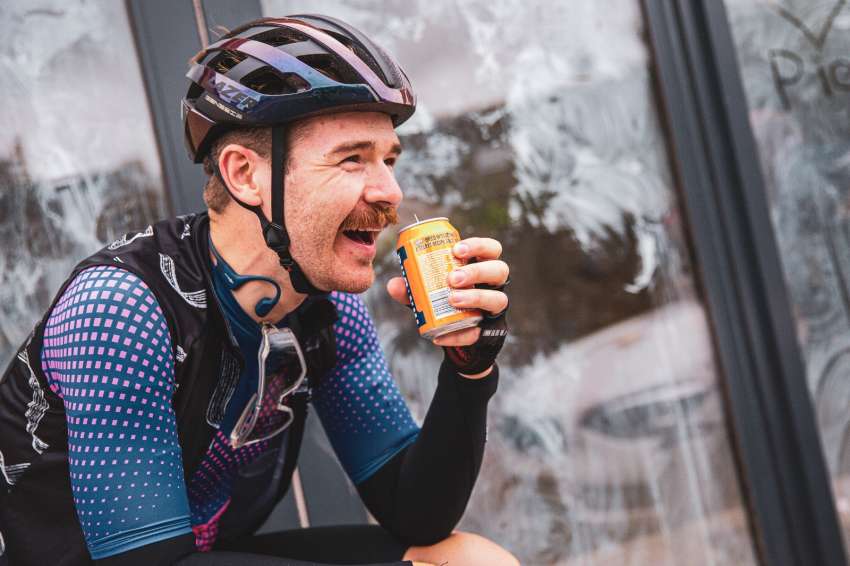 Chris remembers one of the hardest moments on the trip, 40 miles from John O'Groats:

I woke up. Hail storm, thunder storm; proper, proper weather. The sort of stuff people would say ‘there is no way I’m going outside’.

It was 40 miles to John O’Groats, head down, I’ve got to get there, get this done, and psychologically knowing I would be starting to ride home was quite good. Going to John O’Groats, there was a 40mph tail wind, which sounds great when you’re riding there. After, it was a 40mph headwind for 70 miles, and it was like pedalling in tar. I went into this shop and bought Scottish tablet. It was like rocket fuel, I bought like three to get me through it. At the end of the day, I sat on the steps outside the hotel and had a f'cking breakdown. I was like, ‘I’m f'cked, I am already f'cked, and I have still got another 8 days of riding to do. And I have to go back on myself, I have got to do Yorkshire dales, the North York Moors, the Peak District again’… and I was like ‘f'ck… I have made this too hard’

Scotland as a block was really hard, it was biblical every day, if it wasn’t raining, it was hailing, if it wasn’t hailing it was headwind, if it wasn’t headwind it was sunny for two minutes, maybe. It was pretty beautiful, but Jesus Christ it was hard. 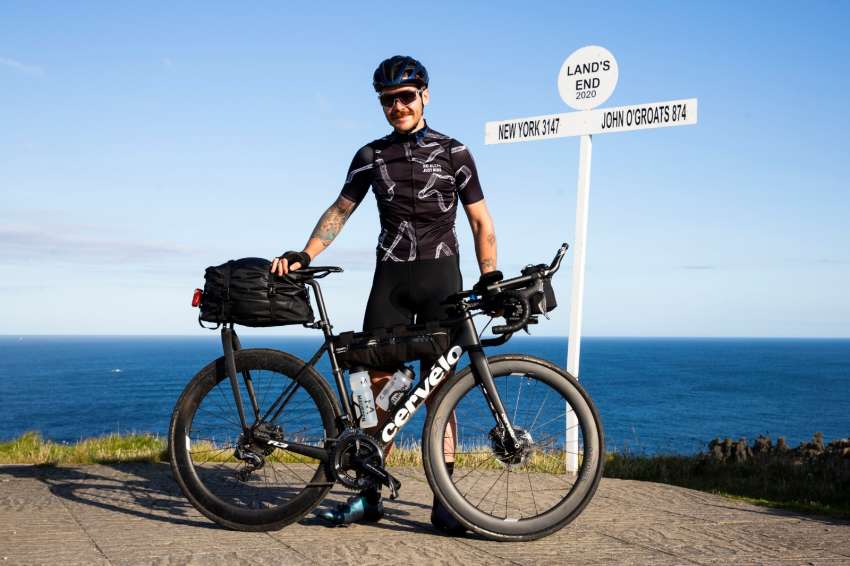 Do you have any particular coping strategies for when it gets hard?

'I am someone who really has struggled with depression, anxiety and I do have a lot of self-doubt – I do regularly question myself, and if I am good enough to do these things. And sometimes the brain wins out on that and sometimes it doesn’t, that’s the nature of it. For me, there’s a few things I do. I count. With the 24hr TTs,m I start at 9000 and count back to one, it’s a distraction from the pain. It's known that Rohan Dennis does a very similar thing, where he counts stripes on the road and things like that – for me it’s always been a good method of distraction.'

'Two other things I do that seem to work for me are continually reiterating something in your head. In my head I keep saying ‘look good, feel good’ - I am looking good, as in I am looking strong, and I feel good, as in I feel alright. It’s like positive reinforcement.'

'The last one is smiling – even if your f'ed, if you smile, it gives you endorphins and makes you feel better. They all sound stupid but they work for me, they might not work for everyone.'

'Breaking things down as well, I looked at this challenge as a whole – there’s nearly 4000km. That’s massive, look at the elevation in it, f'ck that’s massive, but breaking it down in to manageable chunks it becomes more doable, national 24hr TT, break it down in to 4 hour slots, most people can ride for 4 hours.'

A summary from Chris and his coach, Ken Buckley

'My coach sent me this list about the challenge – a summary of everything. He wrote:

Chris rode a total of 2242 miles which is 86 miles further than the actual Tour De France. He was riding on average 7 1/2 hours each day and completed a total of 145 hours of riding, that’s more hours than a 9-5 job

To put this in to context, Pogačar won the Tour de France in 87 hours and 20 mins, so Chris did a further 58 hours of riding than the pros, who were riding in the peloton, drafting, having easy days and not carrying their stuff, and having all their food and massages organised for them.

'I am not the strongest cyclist in the world, I will never win one of these ultra races, I'm not mad enough. I will do well, I’ll be competetive, but I won't win them.'

'My attitude is that I don’t have to finish. If I don’t finish it doesn’t matter, I have learn't something, or I have gained a lot of experience from it. But I think a lot of people that go in to these kind of races wanting to finish or wanting to win, they set really high expectations then maybe they don’t reach them, but you just have to take things as they come.'

'There's no point doing anything if you don’t enjoy it, or try to enjoy it as much as you can.'

Cervelo, Chris's bike sponsor filmed Chris during his challenge to document the ride and increase publicity for the PACE Centre. We really look forward to seeing the release!

In the last few days, Chris has unveiled his most recent challenge, which will support Movember. See more info here. https://www.youtube.com/watch?v=aaf6Ra_z7Qk

__He is also raffling off a bike for PACE. __ Donate to the Pace Centre 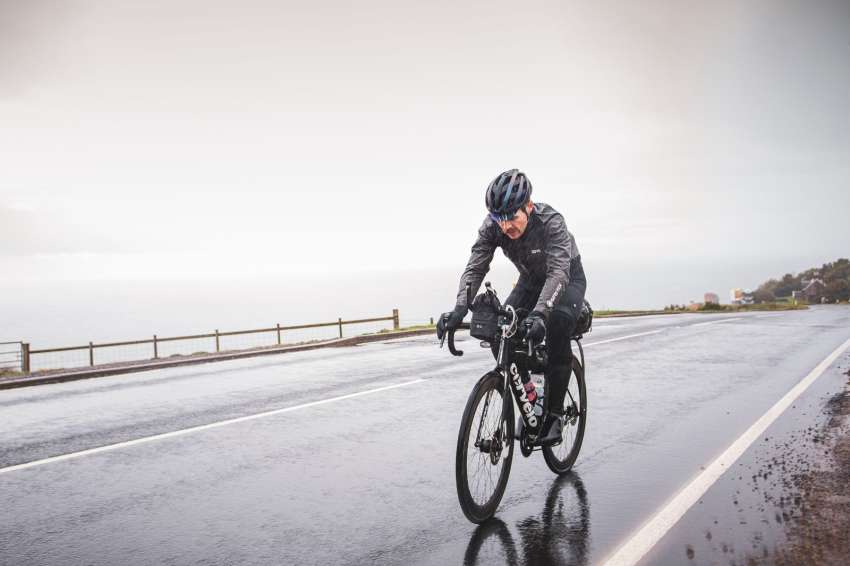 Also from 5 Minutes With...