Bailey finished in a time of 15, days, 18 hours and 27 minutes - some 16 hours behind Lewis. He finished in the early hours of the morning, after one last tough day battling the heat and strong head winds of the desert. It was a fight to the last, and one which earned a special mention from Lewis in his post-finish Instagram post:

Just over 8 hours later, our third rider on the route, Greg Gleason, made it to the Mexican border. Greg's time was just over the 16 day mark (16 days, 2 hours and 53 minutes), and his ride completed what has been a fascinating few days of racing for our podium riders. 8 hours is a small time gap on the great Divide, so Greg really was pushing Bailey towards the end. Lewis Cidor has commented since finishing that he felt the pressure from Bailey constantly over the last days of the race. Although the Divide can be a very isolated affair when you are in a racing mindset and another rider is relatively close, there is a certain amount of pressure to keep riding and keep stops short. This trio have all done a remarkable ride given the conditions at this year's race: In a drier year we could have certainly expected three sub-16 day times and, possibly a sub 15-day too.

Keep tuned in to the DotWatcher coverage over the next week as we keep an eye on the finishers and stories from further down the field.

Congratulations to Lewis Ciddor, the 28-year-old Australian who has just reached the Mexican border and won the 2018 Tour Divide. Lewis has been leading for the past week, building an advantage in the snowy northern climbs snd consolidating his lead when the terrain and weather became flatter and hotter.

Bailey Newbrey, the next rider in the southbound race, is passing through the last stretches of the Gila Forest, about 20 miles north of Silver City.

The beers are becoming an increasingly regular feature on the menu as this anonymous rider's Instagram food diary. 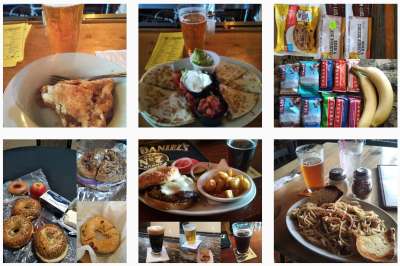 The Divide keeps on going from one extreme to the other. The mountains have given predominantly rain and cold conditions, however as our leader Lewis Cidor rides into New Mexico forest fires have begun to affect his ride. The fires have mean a road diversion from Abiqui to the town of Cuba. Despite being a slightly flatter alternative it does add distance to the route and unfortunately means missing out on an incredibly scenic section.

However, we can’t battle mother nature, as much as we may try, so the riders will need to take this diversion for their own safety. Lewis is now on the home run with less than 400 miles to go and only 100 to Pie Town. Will the Pie Town pie fuel him up enough to make a non-stop dash to the finish? Only time will tell. Currently Lewis is running around 200 miles behind Mike Halls 13 day, 22 hour and 51 second course record set in 2016. It’s hard to see how Mike’s record can be beaten, it will certainly take and exceptional athlete and good conditions to get anywhere near.

A sub 15-day ride could be on the cards for Lewis though especially if he gives it a good push in the final few hundred miles.

While the men’s leader battles high desert temperatures, Alexandra Houchin, our female leader, is enjoying snowy mountain passes further up the Divide. She has now covered over 1500 miles on her journey south as she makes her way into Colorado.

Although it’s easy to get wrapped up in the battle at the front of a bikepacking race, you have to remember that it’s only a race for the first few riders. Not everyone is strong enough or even motivated enough to race these events. In fact, for most (probably most of the leaders too) it’s all about the adventure and seeing the world. It’s actually harder for the riders further down the field. It takes longer to get between service towns for resupply and as a result they need to carry more which add more weight to the bike and requires more effort to move it. Plus a longer ride means more nights in a dirty chamois, more nights without a shower and more nights bivying in the wild. So, as we watch the leaders making the last charge for the line just remember the real hero’s still battling away out there.

Its brutal out there. The 2018 Tour Divide is turning out to be an incredibly tough edition of what is a tough ride in the best of conditions. Kevin Kinton sums things up quite nicely in his latest Instagram post. Hiding from the rain in a public toilet eating cold breakfast leftovers he lets us know how unpleasant it is out there. Rain adds to the physical toll with extra levels of discomfort. You are never dry, your stuff gets wet, your sleeping kit gets wet, you get cold quicker, and sweat quicker in rain jackets. Kudos to all to those riders out there who are trucking on through the worst of it.

The elements are affecting riders further up the field too. Australian singlespeeder Gareth Pellas who was mixing it up in the lead early on has started to succumb to the effort and elements. Wet weather plays havoc with tendons and ligaments and constant hike a bike sections through snow drifts will not help avoiding symptoms of tendonitis. For Gareth tight muscles and tight tendons mean tendonitis has set in. It reaches a point where it’s foolish to fight, and Gareth has made the smart choice of resting up for a day to allow his body to heal so he can complete the route. The main challenge of the Divide is to survive and complete the route, racing comes second.

Out race leader Lewis Cidor maintains his 100-mile advantage as he ticks off the high passes of Colorado. As I type Lewis is taking on the highest pass of the Tour Divide route, the 11,910ft Indiana pass. It could be argued that Lewis will have broken the back of the Divide despite the 750miles remaining. Once over Indiana there are a few passes remaining but the altitudes are lower before the drop down into New Mexico where other challenges await, such as heat and few resupply points await.

Josh Ibbett, winner of the 2015 Transcontinental Race, will be bringing his racing knowledge to bear on the Tour Divide with daily recaps on DotWatcher. Today he's rounding up the situation for race leader Lewis Ciddor, who's well on his way to the New Mexico stateline.

Ten days in, a 100 mile lead, 1000 miles and 10,000ft left to ride. That’s a brief summary of Lewis Ciddor’s life right now as he really takes ownership of this Divide.

Lewis’s main challenge now is with the course as his nearest competitor, single speeder Bailey Newbury, has fallen 100 miles behind. His next challenge is the 10,800ft Marshal’s Pass from Mears Junction to Sargents. This should round out his eleventh day on the trail, potentially with a warm bed as Sargents has a full complement of facilities – including a motel and a supermarket, the holy grail of Divide stopovers. The past few days have not been without their difficulties though as the 1700 miles of riding have begun to take their toll.

The comments on Lewis’s latest Instagram post warm the heart as Bailey Newbury drops him a message. This bond with another competitor is unlike any other bond life can create. It’s a feeling of brothers in arms united to take on such an incredible challenge. It’s a bond that cannot be wholly appreciated until you have experienced it for yourself.

At this point in a long distance ride, emotions can swing like a pendulum. It’s easy to go from the depths of despair to incredible highs in the space of a few minutes. Monitoring the social media posts of riders throughout the field is showing this in abundance. The terrible conditions that most of the riders have endured over the past few days must have been especially hard on their emotions. However, the first rays on sunshine have blossomed into a range of fantastic images posted.