Lenhard lays waste to the competition

Experience counts. Even after dropping positions following a routing error, 40-year-old Lenhard stuck to his plan, catching Matthew Falconer in the final stretches of the race and steadily closing the gap after crossing into Greece.

As Lenhard told A Life of Adventure this summer: “There isn't anything that worries me. I have so much experience now. I am used to the long days, and the dogs, the weather and the bad traffic.”

Finishing with a time of 9 days, 22 hours, and 00 minutes, it’s a performance to be proud of – especially with such a close battle so late in the race – and well deserving of praise. Chapeau, Björn. Time for a cold beer.

Bjorn Lenhard #TCRNo6cap2, walking the CP4 parcours yesterday evening. He started at dusk and was soon walking sections to avoid damaged tires and wheels, his cleats took a beating. Temper frayed, bike and rider coated in dust he finally summitted in the dark and was soon joking that we should have added snow and a storm to the CP4 challenge. 📷 @camillejmcmillan ⛰ @apidura

Matthew, also a TCR veteran, emerged from the bunch this year following Checkpoint 4. After catching Björn in Albania, his hard riding and good route choices put him at the front of the race for second place coming into Greece – a position he held almost to the end. Congratulations on a podium finish. Take a bow, Matthew.

The Transcontinental Race 2018 is, reluctantly, almost over.

It's been nearly 40 days since riders departed Geraardsbergen, and the last dot left on the map, that of rider 171, Neil Matthews, looks to be due to finish at some point this weekend, thus bringing the race to a close.

Neil has been the only rider left in the race for some 11 days, and ridden almost the entirety of it alone, well after the fanfare that follows the main field has departed and gone home.

It's been a mammoth show of determination and perseverance to continue on in such a manner, and as a result, Neil has won lots of supporters on the way.

Follow Neil on Instagram, or simply watch his dot, as it edges ever-closer to Meteora over the coming hours.

The 2018 Transcontinental race has now officially drawn to a close with the final finishing party taking place. What a fantastic edition of the race this has been with James Hayden taking his second victory in dominating fashion and Ede Harrison taking her first title.

Now in its 6th edition the Transcontinental race has been closer than ever. Yes, the winner finished well clear, however the chasing pack were battling for position throughout the race. Bjoern Lenhard, James' closest rival before the race and in its early stages, was a victim of both mechanical and routing issues, but he fought - with exemplary spirit - to the end, and still came third. Mathew Falconer, with an unhumanly 38-hour final stint, coming after a consistent race, went from just inside the top 10 at the final checkpoint, to 2nd on the finish line. The battle for the remaining top ten places was incredibly closely fought, and the ride by first woman, Ede Harrison, was a joy to watch develop.

The strength in depth of racers now characterising the top positions is almost certainly due to experience. More and more riders have now taken part in the TCR, or other ultra-endurance races, and they're applying their experience to further the sport and the level of competition - throughout the field. It certainly bodes well for the future of the race and more importantly the future of Dot watching!

A big congratulations must go out to all riders that made it to Meteora for the finisher's party on 14th August, and perhaps an even bigger one to all of those still battling their way across Europe, outside of the time cut, on a mission to finish. We salute the determination, courage and spirit of each rider as much as the next.

Huge thanks must go out to LostDot, the organisation that now runs the TCR after the tragic death of Mike Hall. Last year the event was organised at very short notice after we lost Mike in March. However, they pulled it off and have built an incredible well organised and documented event for 2018. The Transcontinental Race remains at the pinnacle of self-supported road racing and Mikes legacy looks to be in safe hands. Bring on TCR no7!

“You’re going to come across problems - but it’s about how you manage them."

In this podcast from the TCR media team, four top 20 finishers from #TCRNo6 (including three from the top 10) provide invaluable insight into what generates success at the race, and how the experience has affected them.

The finish party for the 6th edition of the Transcontinental will take place tonight, 19:00, at Pub 38.

On the sixteenth day of racing (a day later than previous editions), riders will gather in Greece to celebrate their collective success at completing TCRNO6.

There are 68 riders still registered as active in the race, and one day remaining until the final cut off for a place in the general classification. For everyone still out there – chapeau. For everyone at the party – congratulations, enjoy what you’ve earned.

Tonight we party! #TCRNo6 finishers party starts 19:00 at Pub 38. The pub will stop serving food at 14:00 and close at 17:00 to prepare for the party. Chance to grab a shower and another ice cream. Beer drinking, story swapping, back slapping and a few prizes will be dished out as per our usual relaxed style from 19:00 until late. (yes... we will try to Facebook live at least part of it!) #TCRNo6 📷 @jprobertson

From start to finish

Mikko Mäkipää, cap #4, is currently approaching the border of Greece. He’s just 111km from completing his sixth Transcontinental, and is the only rider ever to start and complete every edition of the race. 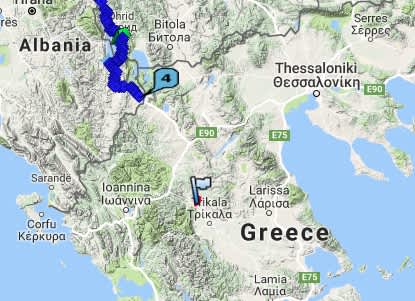 Keep an eye on his dot today, and give him the congratulations he deserves when he rolls into Meteora.