And we have a wrap. Tonight, the curtain came down on the inaugural Two Volcano Sprint.

Out of the 16 starters, barely a third of the field managed to cover the 1,100km course from Mt. Vesuvio to Mt. Etna in time for tonight’s finishing party. This route, so much for being ‘short’ by ultra-distance standards, has proved to be incredibly attritional. Come the finish line, the winner Ulrich Bartholmoes was describing 2VS as harder than both the Transiberica and the Transpyrenees.

Arriving in the afternoon to take 6th position was Rob Gardiner. The weather in Sicily today has been grim, wet and cold but he at least was lucky enough to climb and descend Mt. Etna in a kind of grey, semi-daylight. 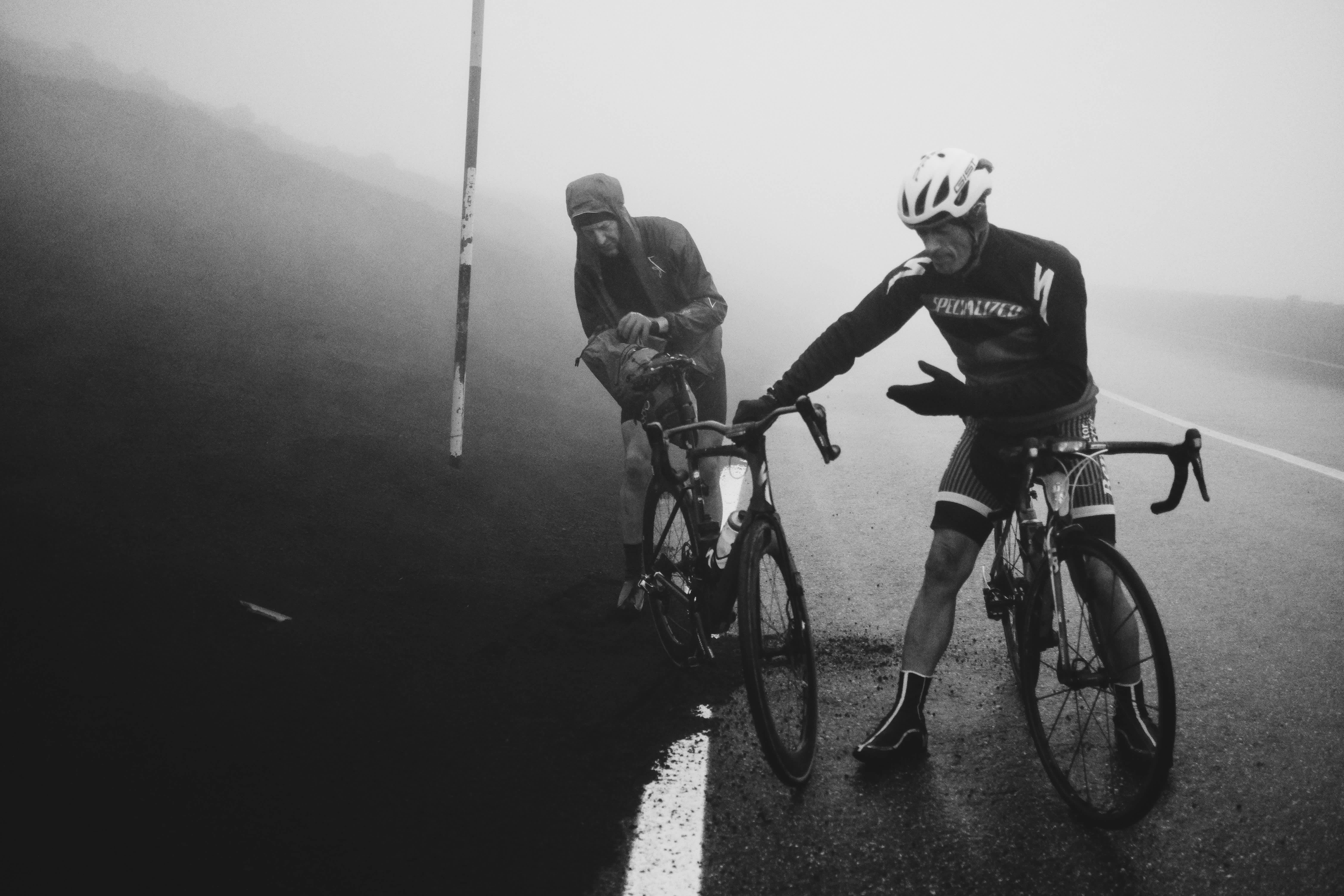 The pairs team of Michele Petrone and Sergio Punzi were not so lucky. By the time they had scaled Mt. Etna late in the afternoon, night was falling fast. Their final run in to Nicolosi was made in the freezing dark and wet - surely the most harsh and challenging descent of Etna made by any of the riders in this year’s race. 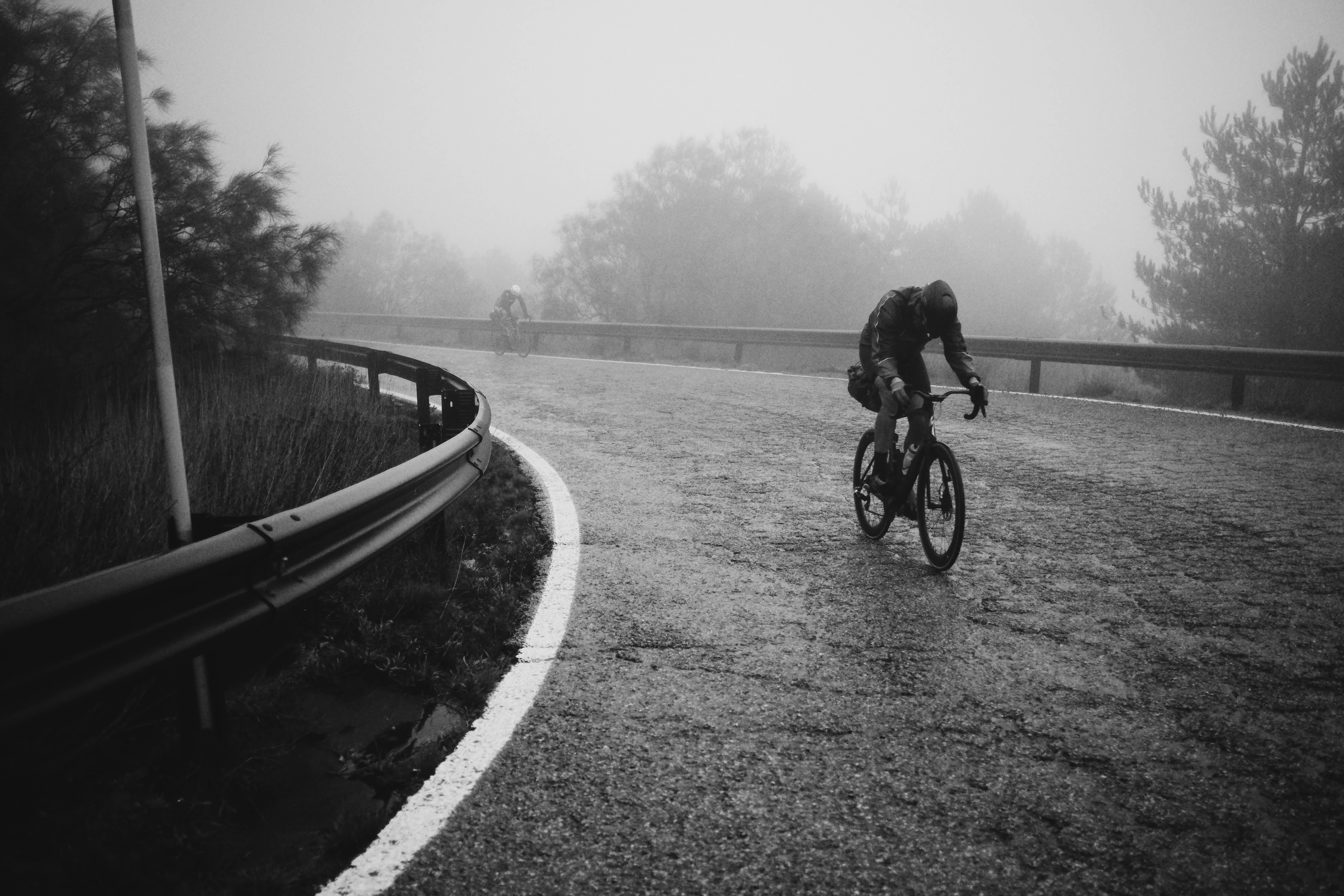 Tonight might well be the finisher’s party, but we should spare a thought also for those rider’s who didn’t quite make it to Nicolosi in time this year. Right this minute, Colin Addison in holed up in a small town on Sicily’s northern shore. Tomorrow, he’ll set off to complete the course. Many other riders have not made it as far as that - but all of them have been part of the story of this race.

At 10:40 pm last night, Robbie Britton rolled into the finish to claim 4th place in the inaugural Two Volcano Sprint.

His duel with Barry Scott had been a long one - for nearly 700km, the two riders had been practically neck and neck but in the end Britton had just enough left in the tank to see it home. 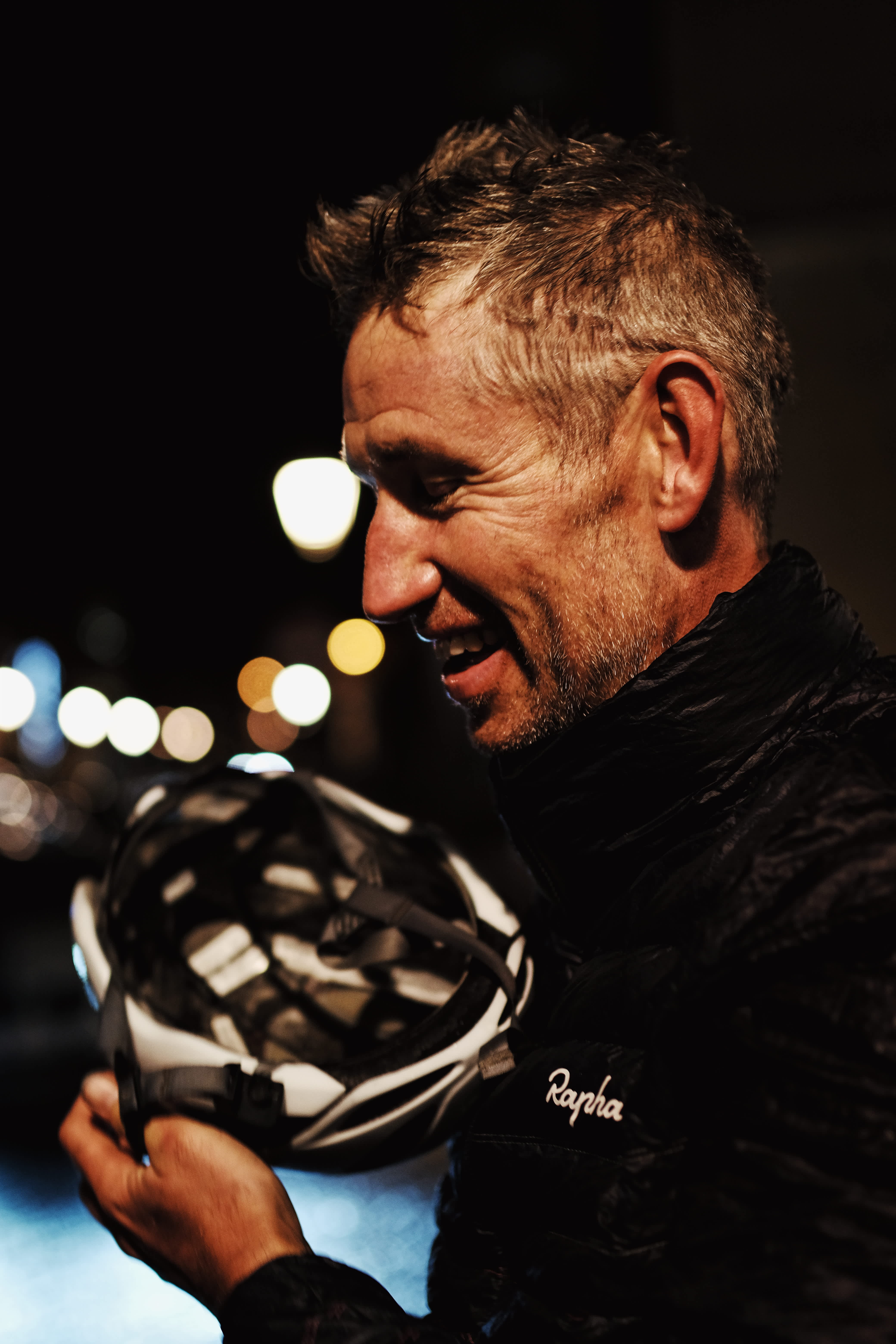 Barely an hour and a half later, around midnight, Barry Scott was also rolling into the finish in Nicolosi. Having made the descent of Mt. Etna in sub-zero temperatures, Scott arrived truly frozen stiff - as he climbed off his bike, he pulled from his bib shorts the wads of rolled-up shopping bags he had stuffed there to try and shield himself from the icy wind. 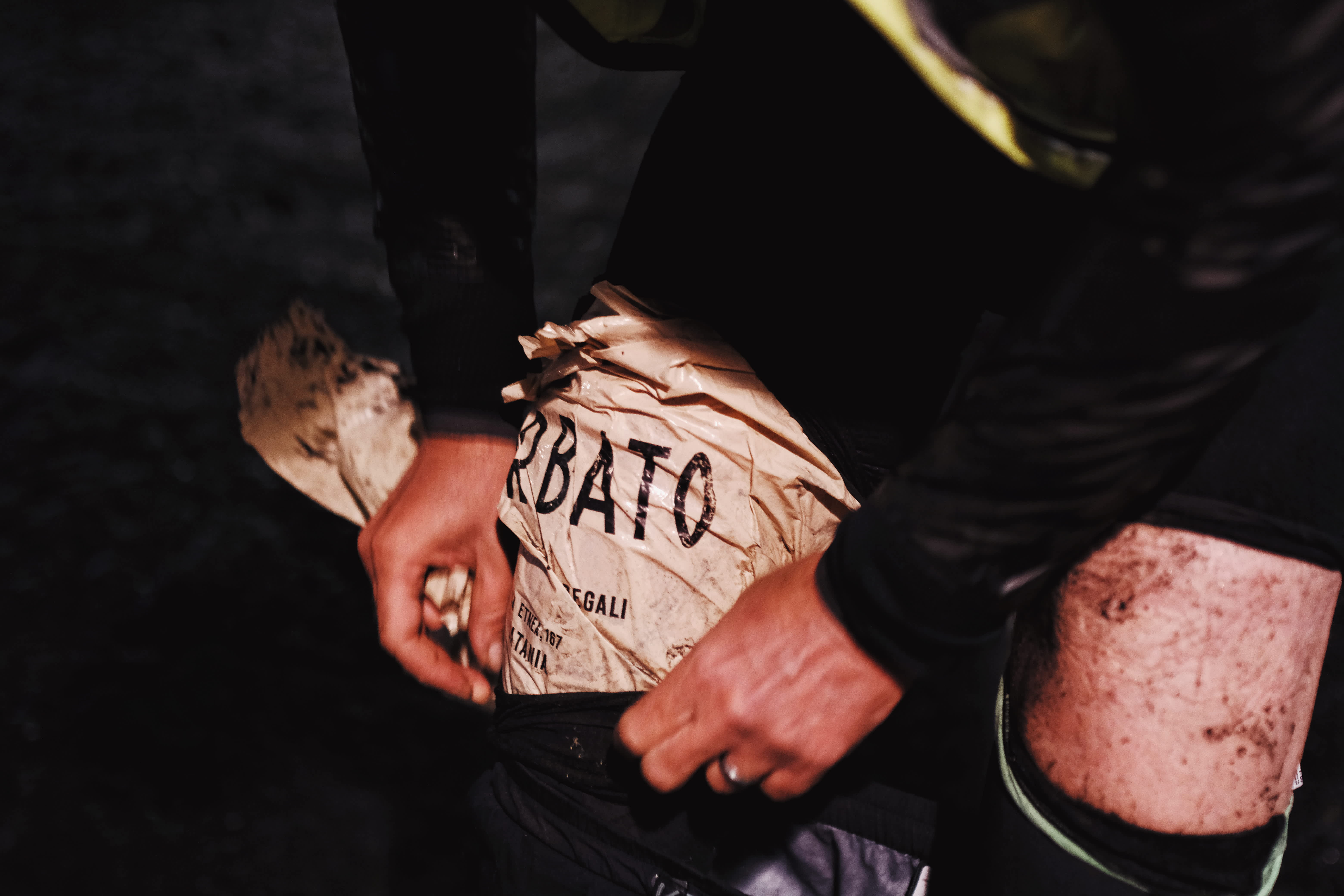 Further back down the road, the rest of the field is now in a race against time to reach the Nicolosi before the finisher’s party and thus earn the finisher’s classification. Colin Addison, Pamela Capparulo and Mary Mackay are all - just barely - within striking distance of making the race finish in time but they will all have to ride hard without stops if they are to make it. 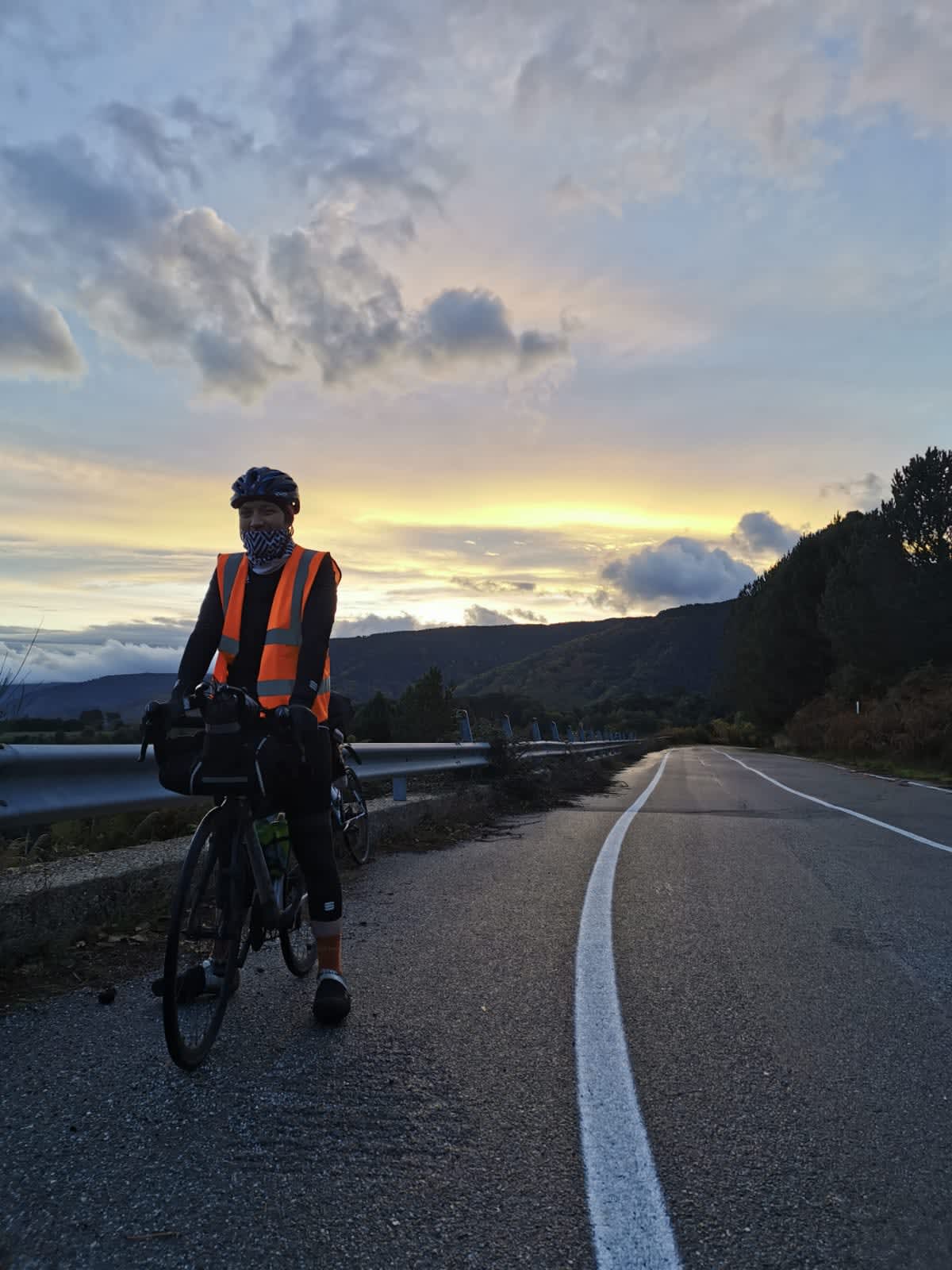 The battle for 4th

After four days, 1,000km of road and over 20,000 metres of climbing, Robbie Britton and Barry Scott can still be barely separated.

Just 15km separates the two riders in the final run-in to the finish, with the two riders even finding themselves aboard the same ferry on the way to Messina.

Britton is currently holding onto a slender lead, having pulled away from Scott on the slopes leading upwards to Mt. Etna. At about 8:30 pm, local time, Britton had crested the peak and begun the long descent into Nicolosi (not, however, before putting on every piece of clothing he was carrying with him).

Barring any misfortune, Britton looks to have secured 4th place in this year’s race – but if this race has taught him anything, it’s that Scott will be chasing him hard all the way to the finish.

Behind them, the race’s leading pair of Michele Petrone and Sergio Punzi have also made the crossing into Sicily. With still 100km of hard climbing left for them tackle before the finish, the two have a long road ahead of them still - but they have, at least, the promise of the finisher’s party tomorrow night to buoy their spirits.

While you were sleeping...

If you had to summarise the final 200km of the Two Volcano Sprint in just three words, then you could do a lot worse than Andrew Phillips’ exhausted finish-line summary.

Race Director Juliana Buhring had speculated before the race that many riders could fall into the trap of thinking that, once they’d made the ferry crossing over to Messina, their race was pretty much over. She knew from personal experience, however, that it’s crucial to keep something in the tank for that final 200km push. 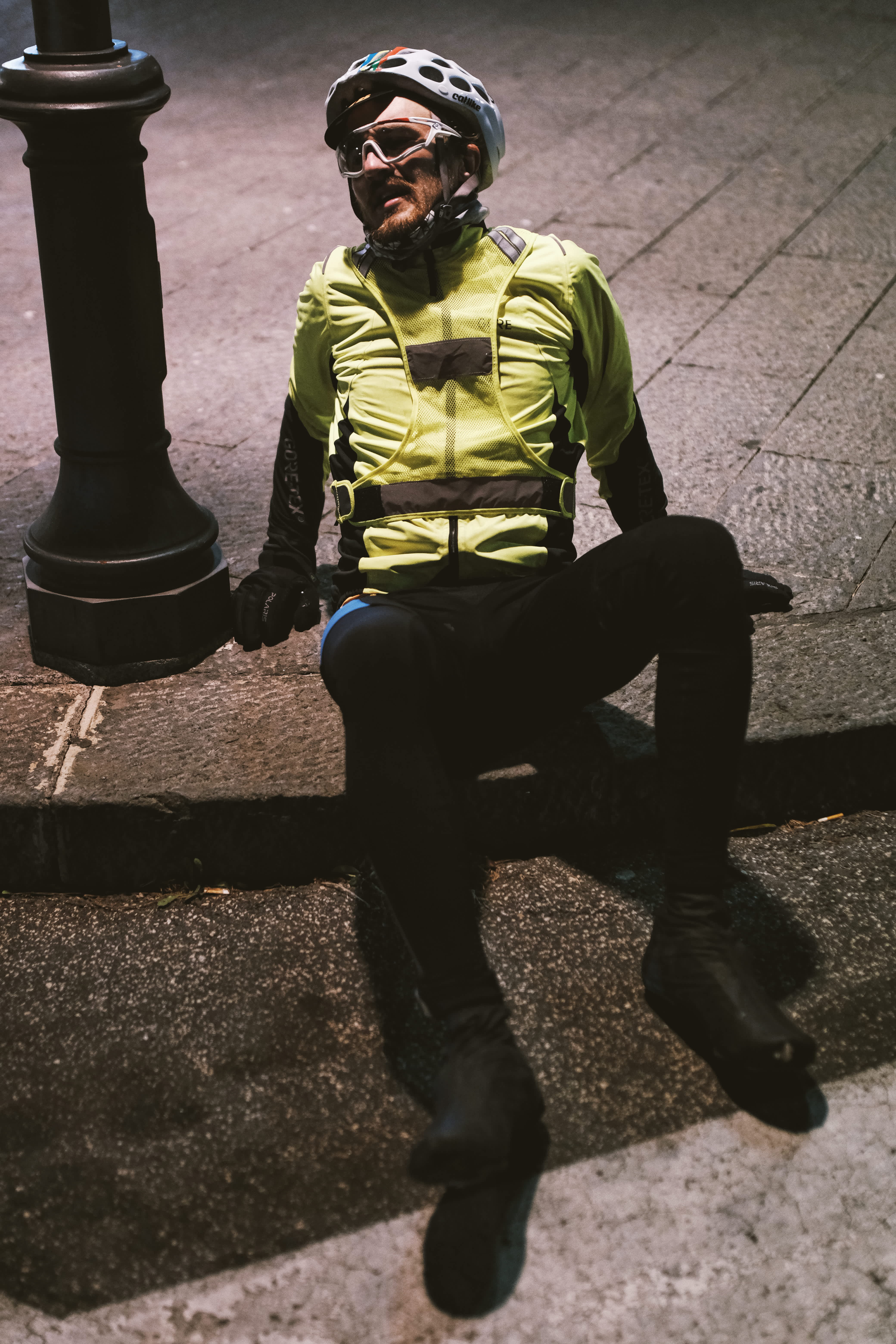 Last night – at 11:20 pm local time – Andrew Phillips became the second rider to make it home, having made the nerve-jangling final descent of Mt. Etna in the pitch black and sub-zero temperatures. When he finally made it down, he was frozen stiff.

This morning, Adrien Liechti arrived to complete this year's podium. Somewhat unbelievably, both Andrew and Adrien had climbed Mt. Etna with only two gears to choose from after snapping gear cables - considering the distances these two riders had travelled, this misfortune must have felt like a sadistic final twist. 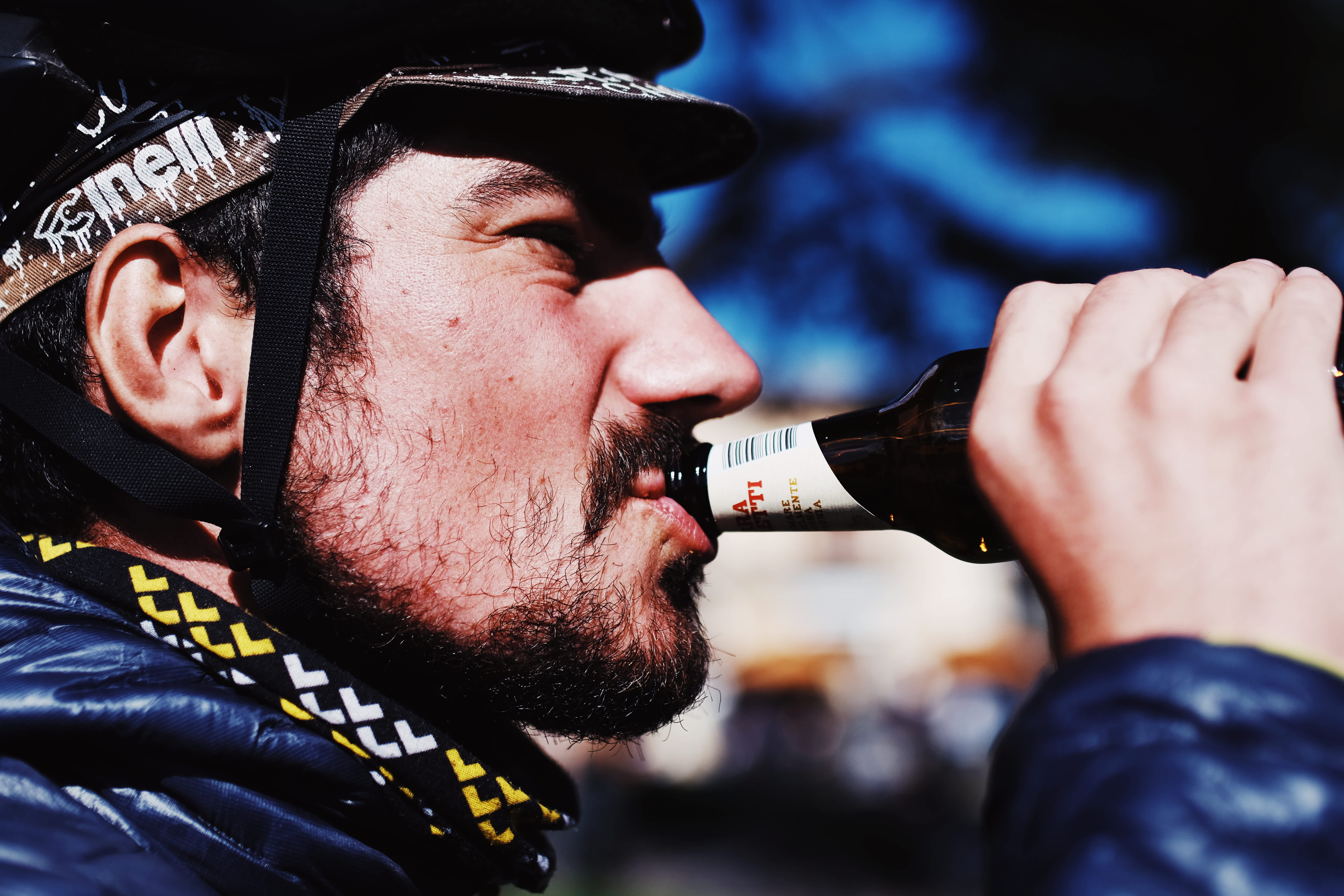 At the current moment, Robbie Britton and Barry Scott are duelling out a fascinating contest for 4th position. These two riders have been neck and neck for nearly the entire race, exchanging positions constantly over the last 700km. Tonight, their race will come all the way down to the wire – and we find out who has something left to give.

Arriving at the finish line in Nicolosi in a time of 59 hours and 58 minutes, Ulrich Bartholmoes claimed victory despite being forced to climb Mt. Etna with only one functioning leg.

In all, Ulrich rode 1100km and climbed 24,000 metres of ascent – and he covered the course well under three days. Considering the time and energy-draining mechanical problems that Ulrich faced early on his race, this was a truly impressive ride from a worthy winner of the inaugural Two Volcano Sprint. 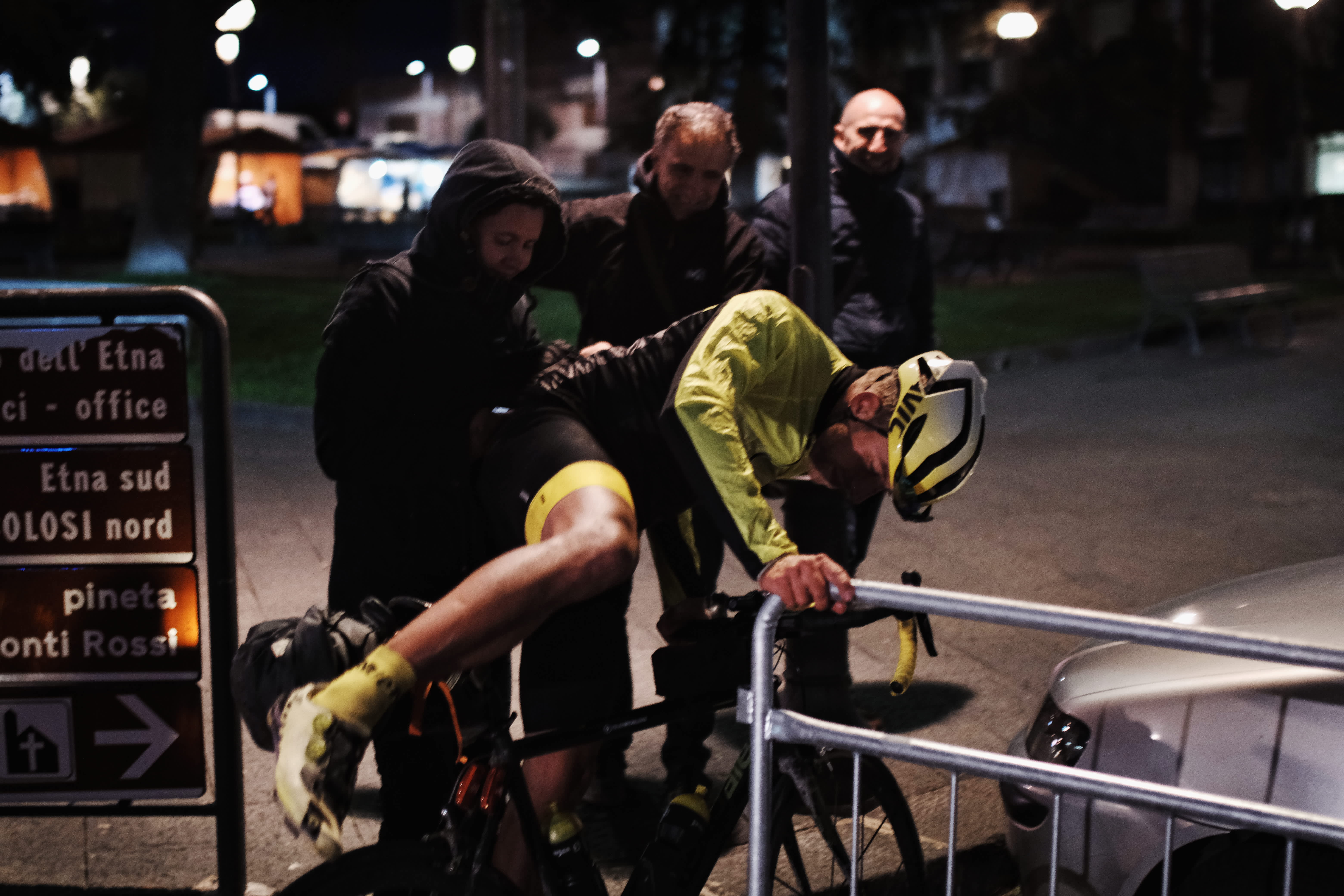 Waiting for Ulrich at the finish was his girlfriend, who was able to give him the news that he’d arrived just two minutes under his stated target time of 60 hours.

Also waiting at the finish was the Mayor of Nicolosi. Together with the rest of the 2VS crew, Ulrich hobbled from his bike and into the nearest bar for a well-deserved beer – as well as a few arancini the size of small mountains. 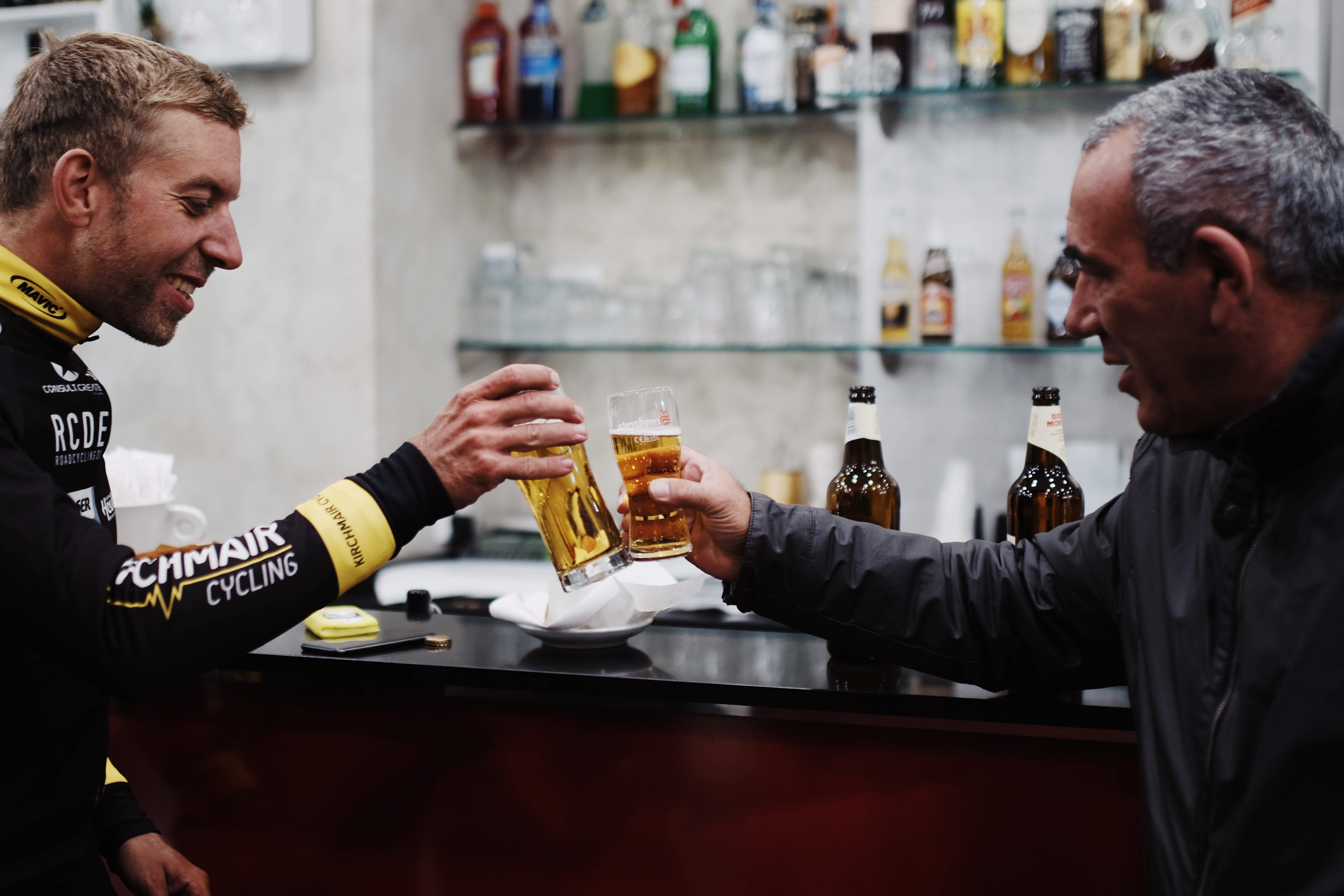 We know by now that the final stretch of this race is a brutal prospect - and yet tonight, things became even more challenging for 3rd-placed Adrien Liechti when the gear cable for his rear deraileur snapped inside his shifter. 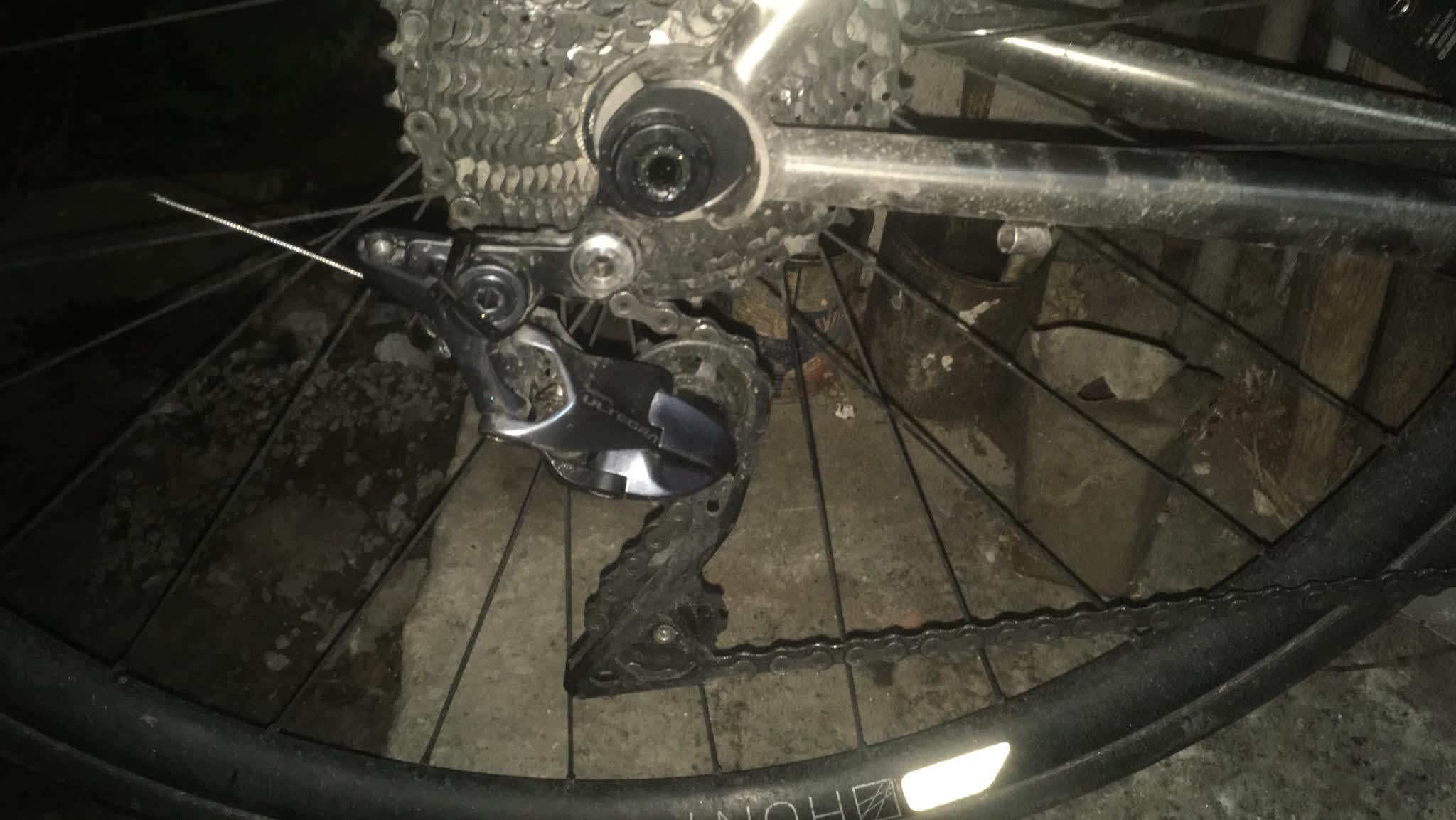 Now, he's left to tackle the remainder of the race on what is effectively a two-speed bike – hardly an ideal racing setup considering the savage gradients he is still yet to face.

Ahead of him, Andrew Phillips is now nearing the summit of Mt. Etna. Soon enough, he will begin the freezing descent down the mountain towards the town of Nicolosi. In the cold and the dark, that final descent will be a real test of these sleep-deprived rider's concentration.

At the time of writing, Ulrich Bartholmoes is wrestling his bike up the ice-cold slopes of Mt. Etna, edging himself metre by agonising metre towards victory in the first-ever Two Volcano Sprint.

12 hours ago, Ulrich’s hold over this race seemed unshakeable – he had a healthy lead over his closest chasers and seemed ominously in control of his own efforts - but the last few hours have seen cracks beginning to appear in the German’s challenge.

The recurrence of an old knee injury picked up racing at the Transiberica is playing havoc with Ulrich's ride – forcing him to alternate between climbing exclusively out of the saddle, or else pedalling with only one leg. 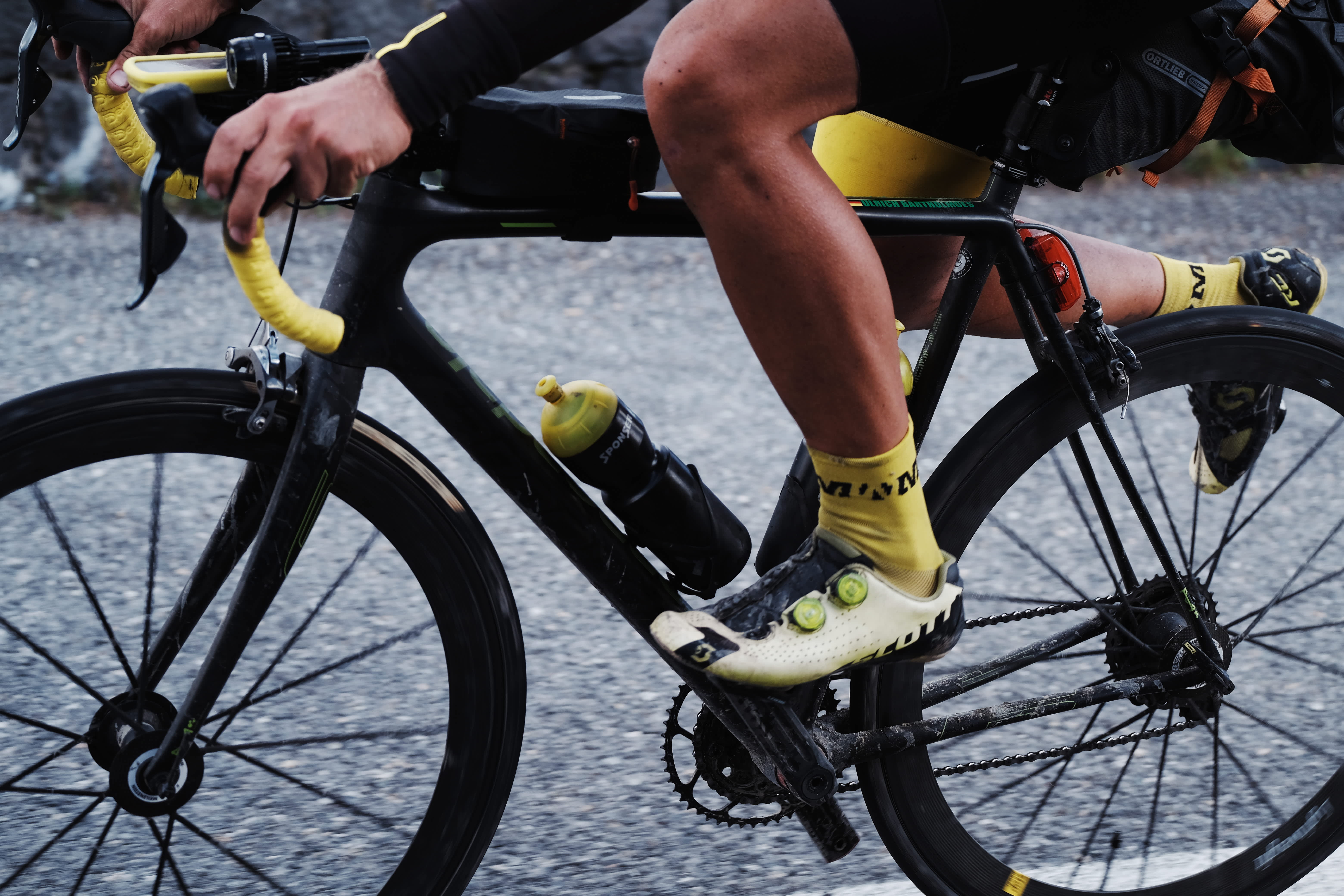 All this has in turn brought on a severe case of Shermer’s neck. Ulrich may only be 30km or so from the finish, but the gradients he is currently facing are brutal… half of the races total elevation is packed into the last third of the course, and that challenge is beginning to take its toll.

He may still carry a buffer over his closest chaser, Adrian Phillips, but Ulrich is now in different race altogether - a race to the finish before his body gives out.

Behind him, Andrew Phillips is now attempting to close the gap and Adrien Liechti has now become the third rider to make the ferry crossing to Sicily. Barring injury or mechanical problems, all three of the leading riders are set to finish the 1100km in a time less than three days – a truly remarkable feat. 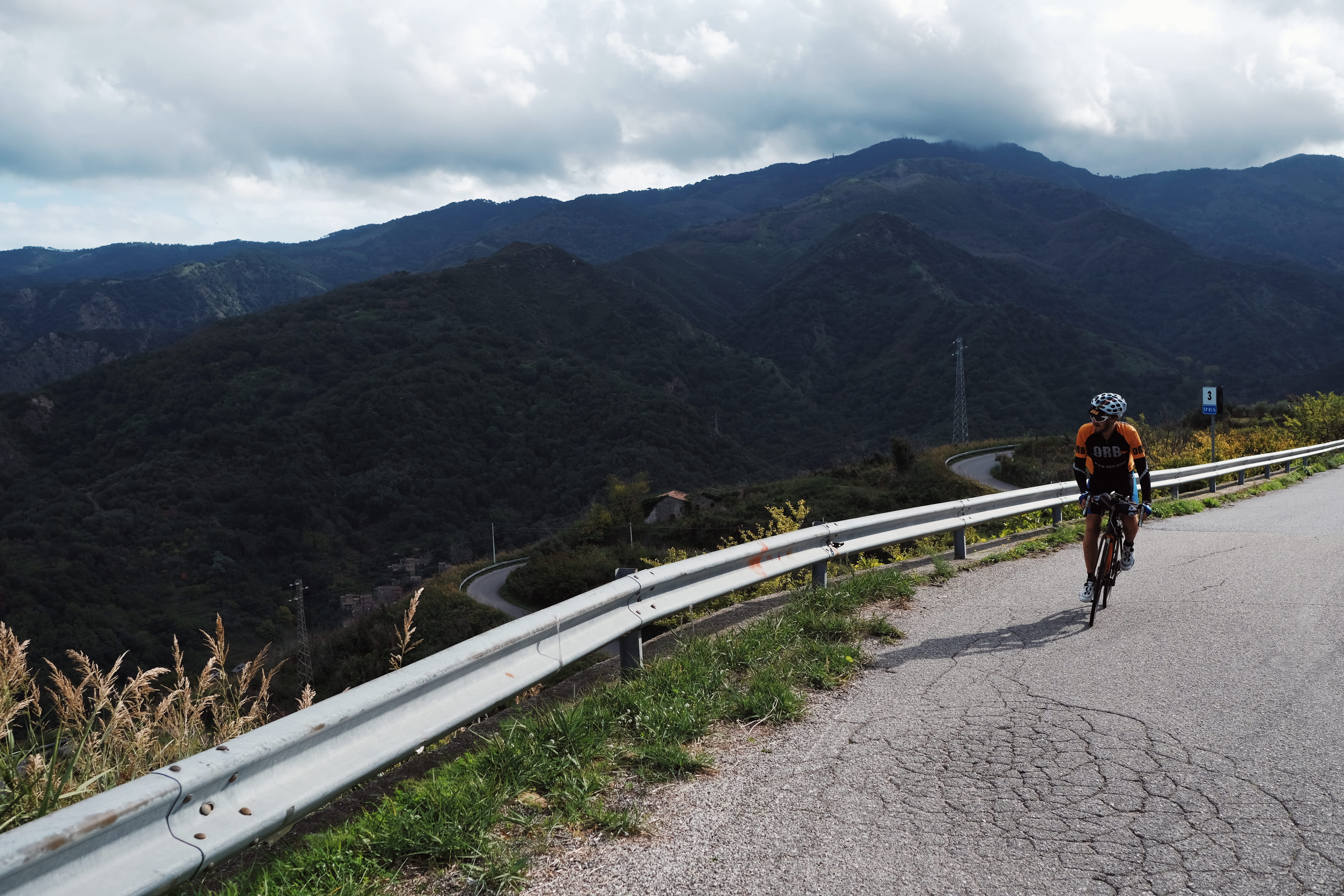 Meanwhile, Pamela Cepparulo’s Garmin troubles show no sign of abating – she is now navigating as best she can using her mobile phone for guidance yet remains in indomitable spirits.