So, after yesterday afternoon's finisher's party, the curtains close on one of the final ultra-cycling races of 2020, which happened to be one of the most exciting we have seen. The pace at the front end was relentless throughout, climbing and descending the flank of Vesuvius, forging a path along the coastal roads, and ascending the steep Mt. Faito climb. This was largely sustained in to the Apeninnes as riders rode in to the first night. A select group of riders formed containing Ulrich Bartholmos, Sofiane Sehili, Omar Di Felice and Joe Rass-Court with James Hayden not far behind.

India Landy, Ana Orenz and Nicky Shaw set the early pace in the solo women's category. However, after India had to scratch due to a crash, it was Ana that pushed through the first night to create a lead she held to the end of the race.

In the overall standings, after James and Joe both scratched due to crashes leading to mechanical issues, Ulrich, Sofiane and Omar battled it out, hardly stopping for rest until Mt Etna, and the finish in Nicolosi. It was ultimately Ulrich who held his lead until the finish, to be crowned winner of the Two Volcano Sprint 2020 (for the second year in a row). Sofiane finished in second, just over two hours later, and Omar finished third half an hour after that.

A chasing group had formed through the Apeninnes, which was also sustained until Sicily. The rest of the top ten finished over the next eleven hours: Cristian Auriemma in 4th, Kim Raeymaekers in 5th, Lukas Neubeck in 6th, Manuel Truccolo in 7th, Andrew Phillips in 8th, Adrien Liechti in 9th and Anabell Orenz in 10th.

Fanny Bensussan rallied after early issues to finish in 12th overall, and became the second woman to finish. Nicky Shaw was the third women to finish (in 22nd overall) fifteen hours later.

Our lantern-rouge(s) finished in just over five days. The Linton twins (Naomi and Ruth) had barely ridden bicycles before deciding to take on the 2VS challenge. One rode a B-twin bike because, as in her words, she’s the “B Twin”. Her clip broke halfway and she finished the race on flat pedals and 10€ plastic shoes. We think these two deserve the prize of “Legends”.

Also a massive thanks to the Two Volcano crew for making race commentary happen with live pictures and comments! See you all next year!

The curtains have almost drawn closed on this years Two Volcano Sprint. As much of the cycling world's eyes were on the Alps as the Giro d'Italia was lit up - many of our ultra-cyclists were still proving themselves by conquering Etna and earning the respect of finishing this brutal race. 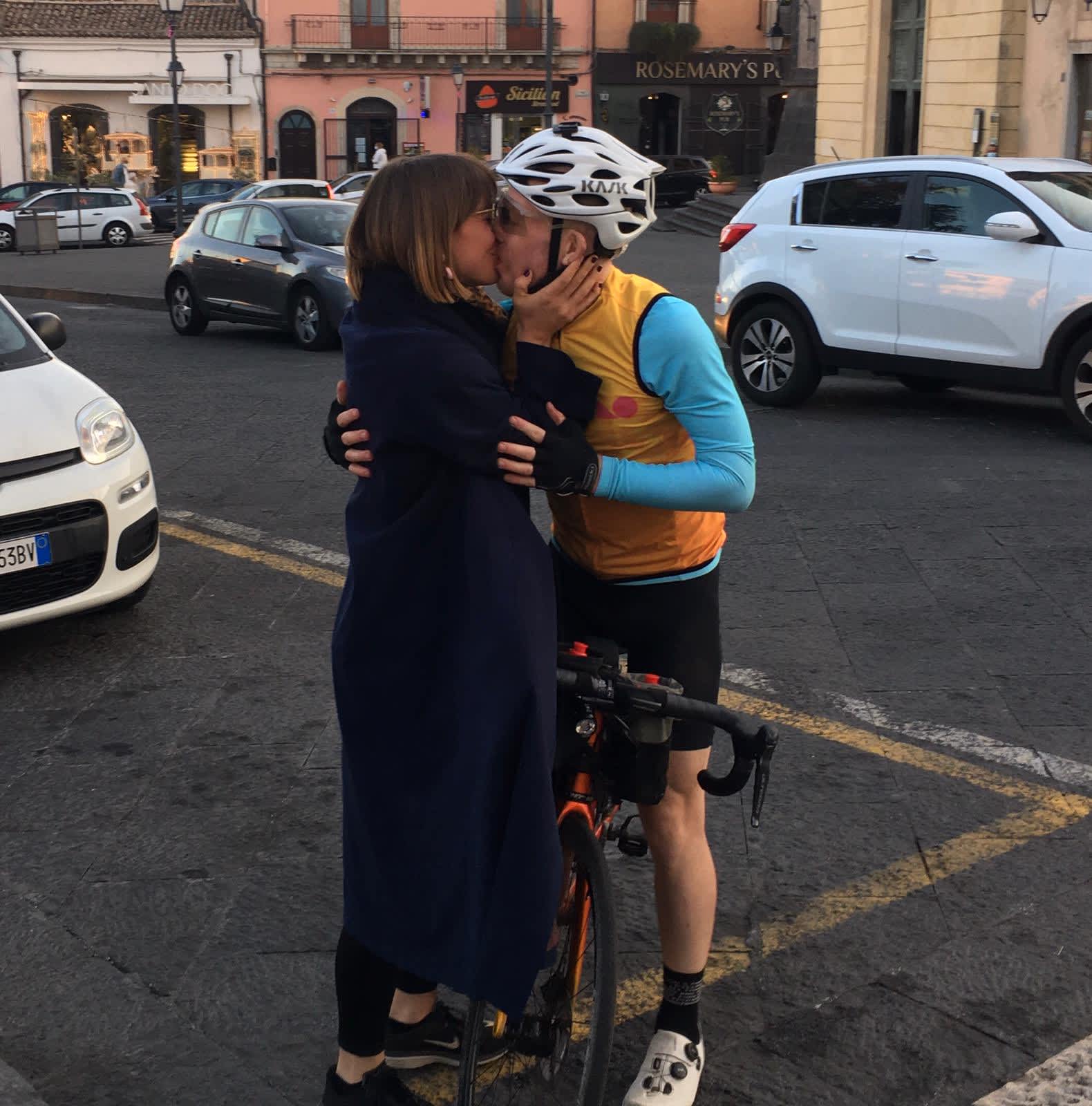 📷 Celeste Jones - Patrick Doupe reaches the finish to reunite with his wife. Patrick's bike broke early on in the race but managed to finish still after getting replacement wheels.

Eleven riders have reached the finish so far today. Adrian O’Sullivan, Matthieu Lifschitz, Frank Scholler and Marina Sonzogni arrived earlier in the day (as seen in previous updates). Riders continued to finish throughout the afternoon and evening: 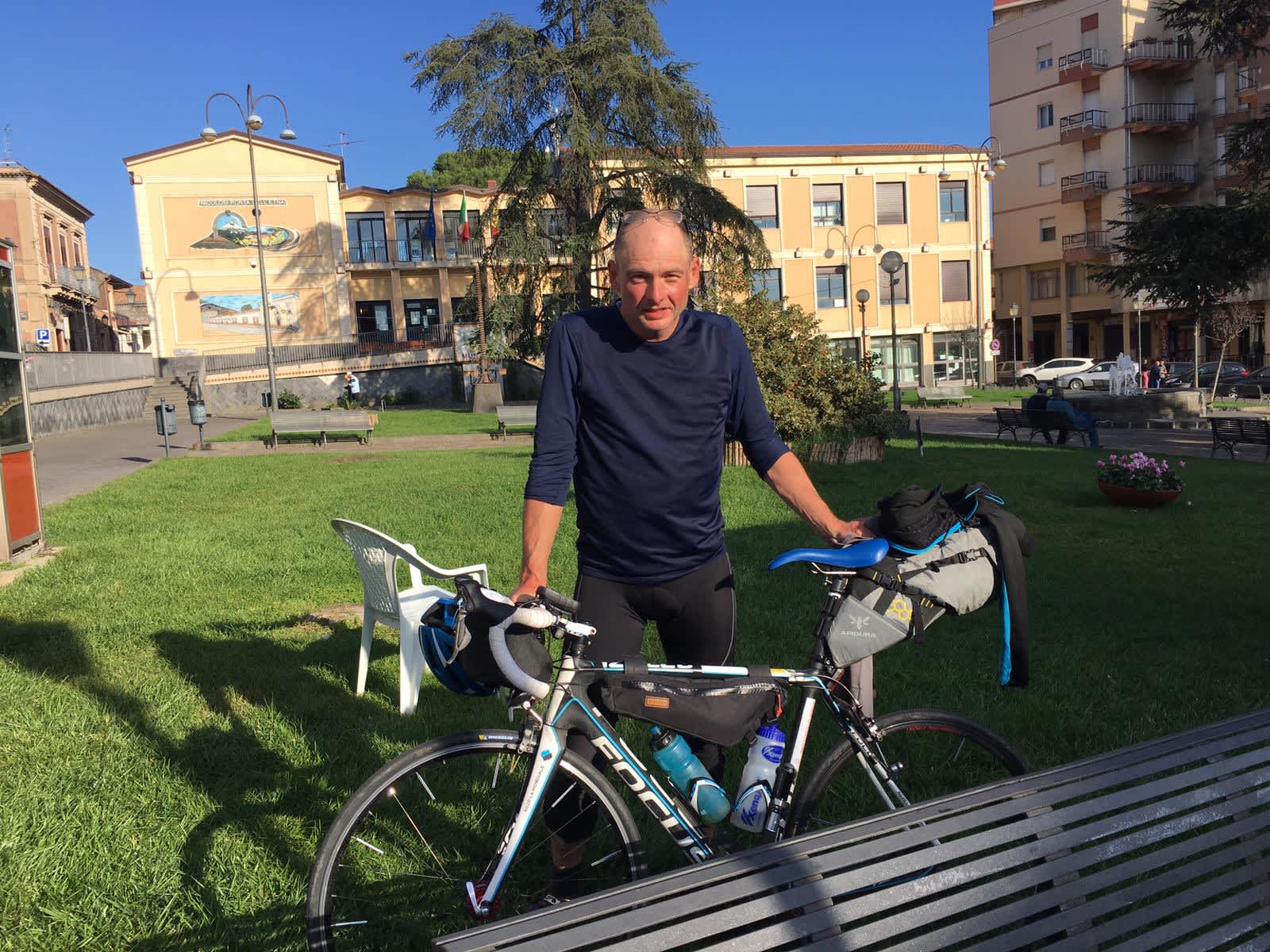 📷 Celeste Jones - Frank Scholler at the end of his first race. "It was unreal. The last climb was tough. At the top of Mt. Etna, I cried like a child". 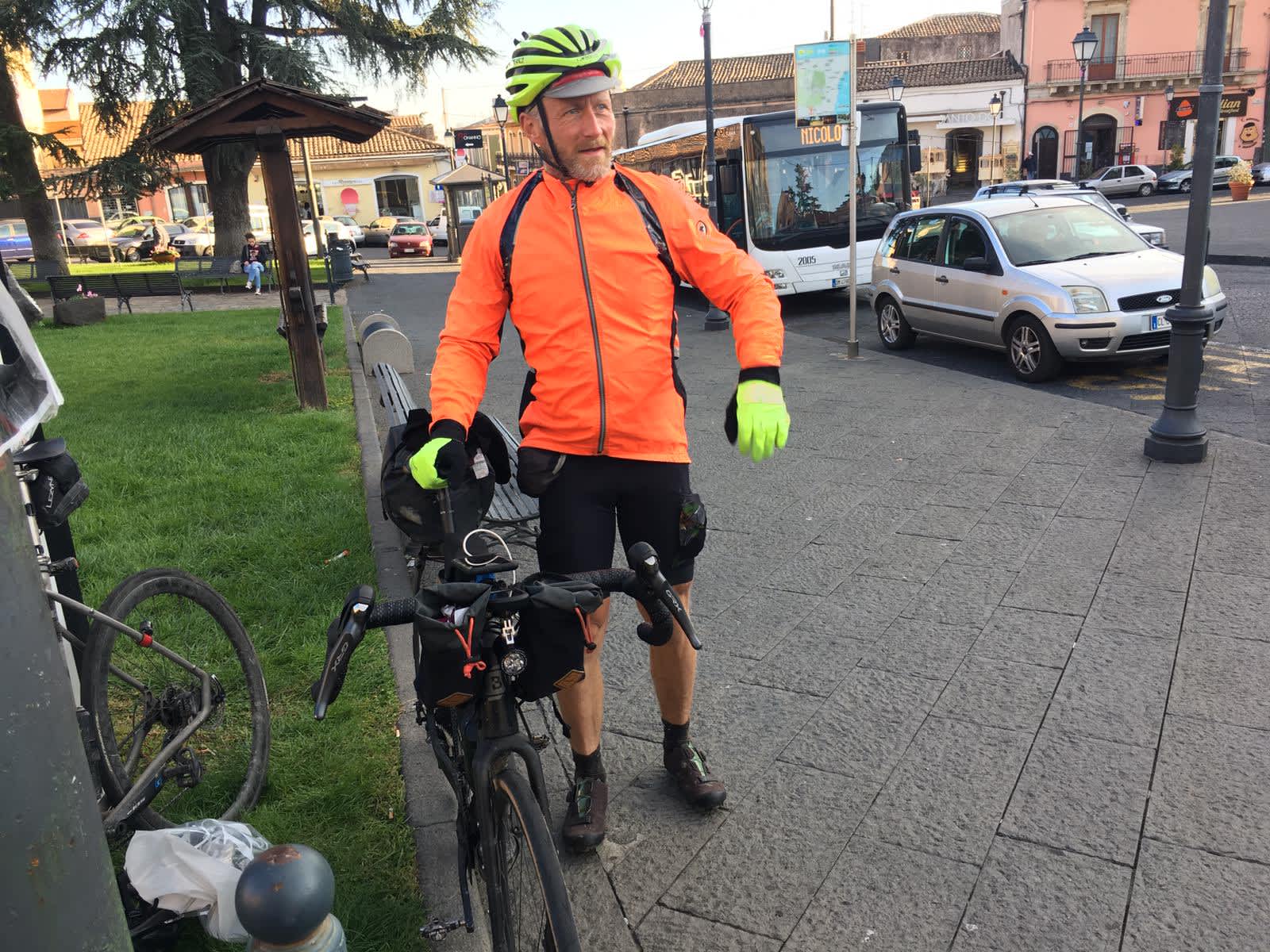 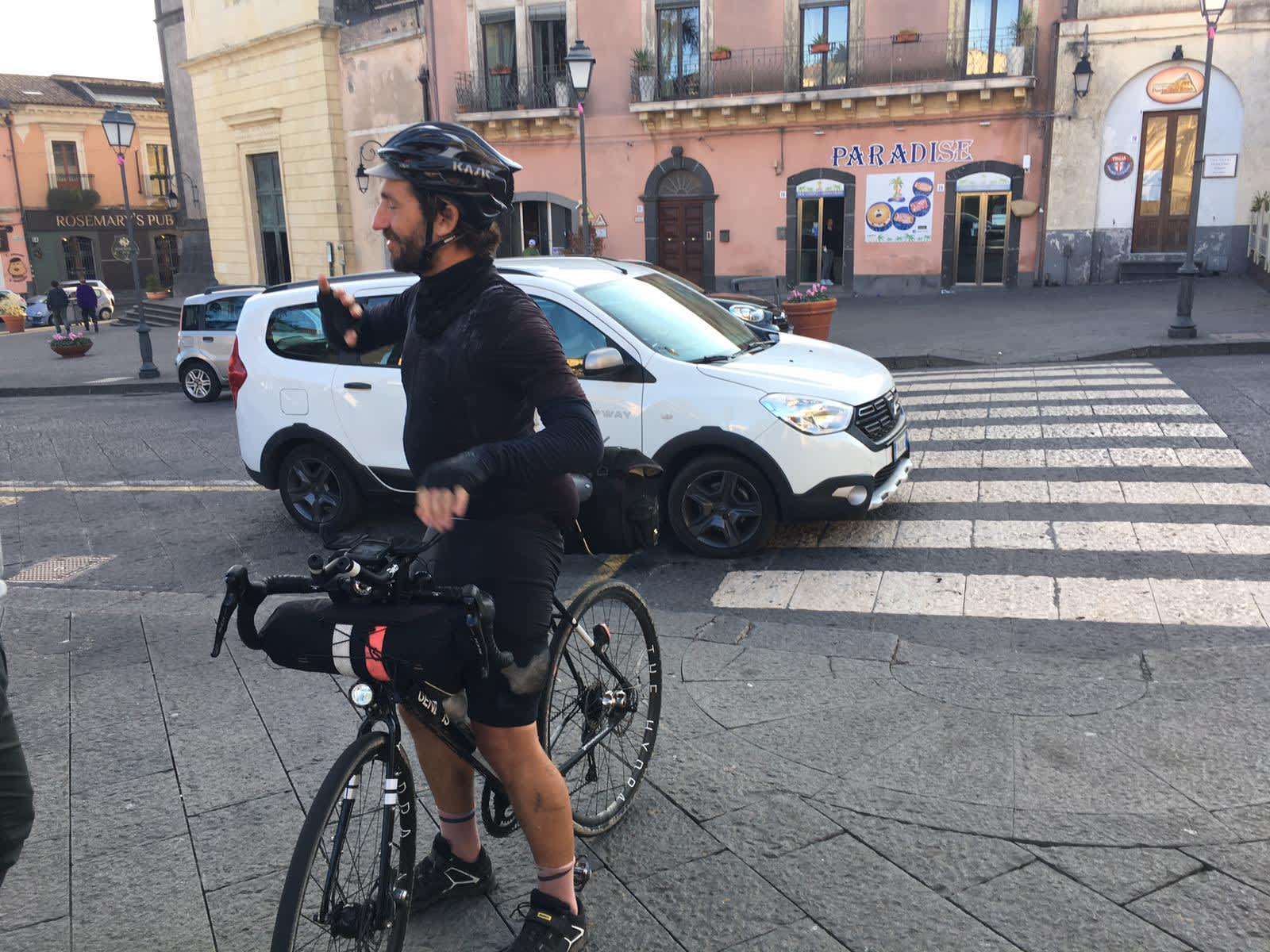 📷 Celeste Jones - Thomas Chateau "The descent from Mt. Etna was enough to forget all the other difficulties" 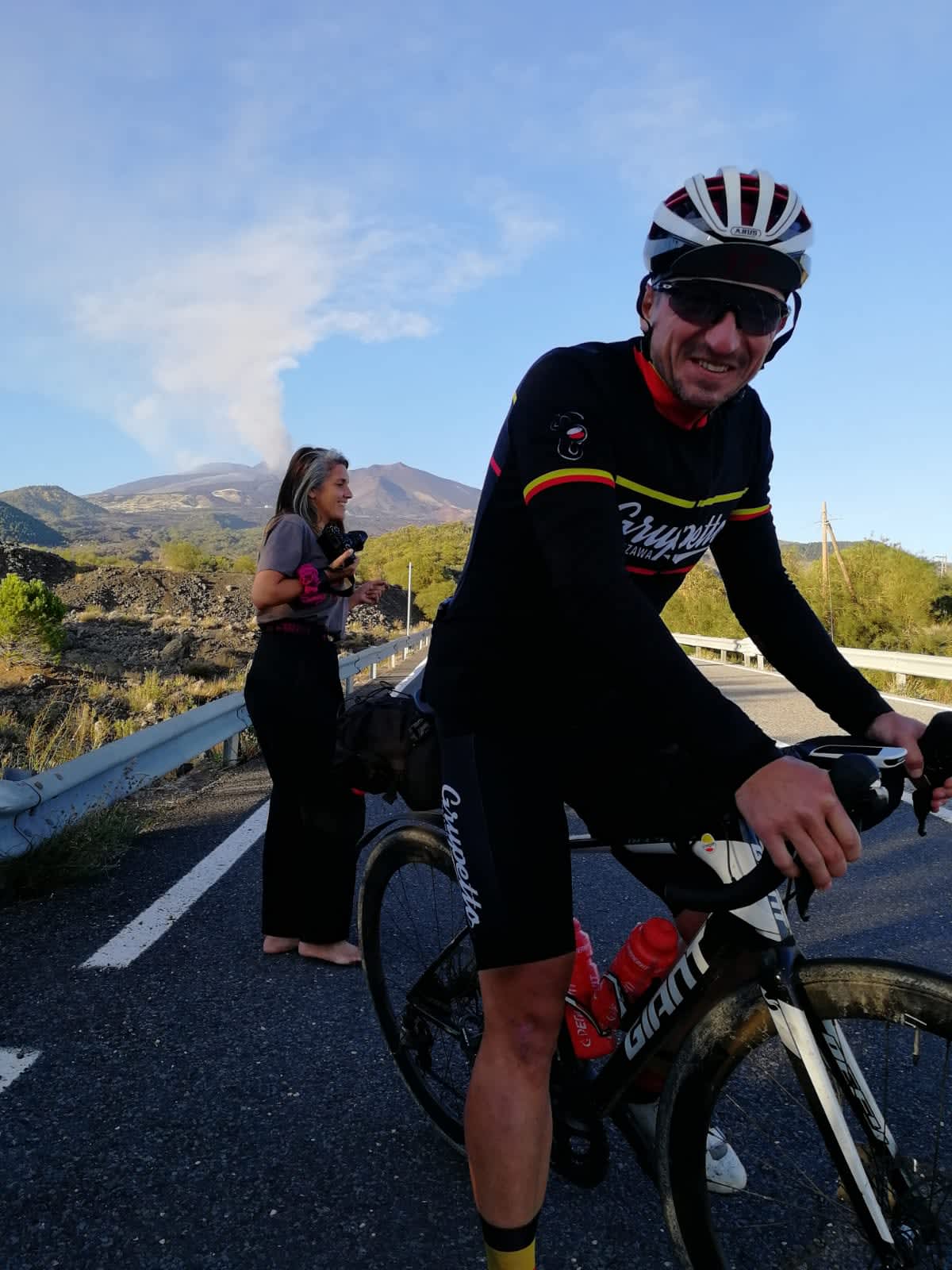 📷 Lily Buhring - Kamil Prusinowski on his way to the finish: "It's a shame it's over!" 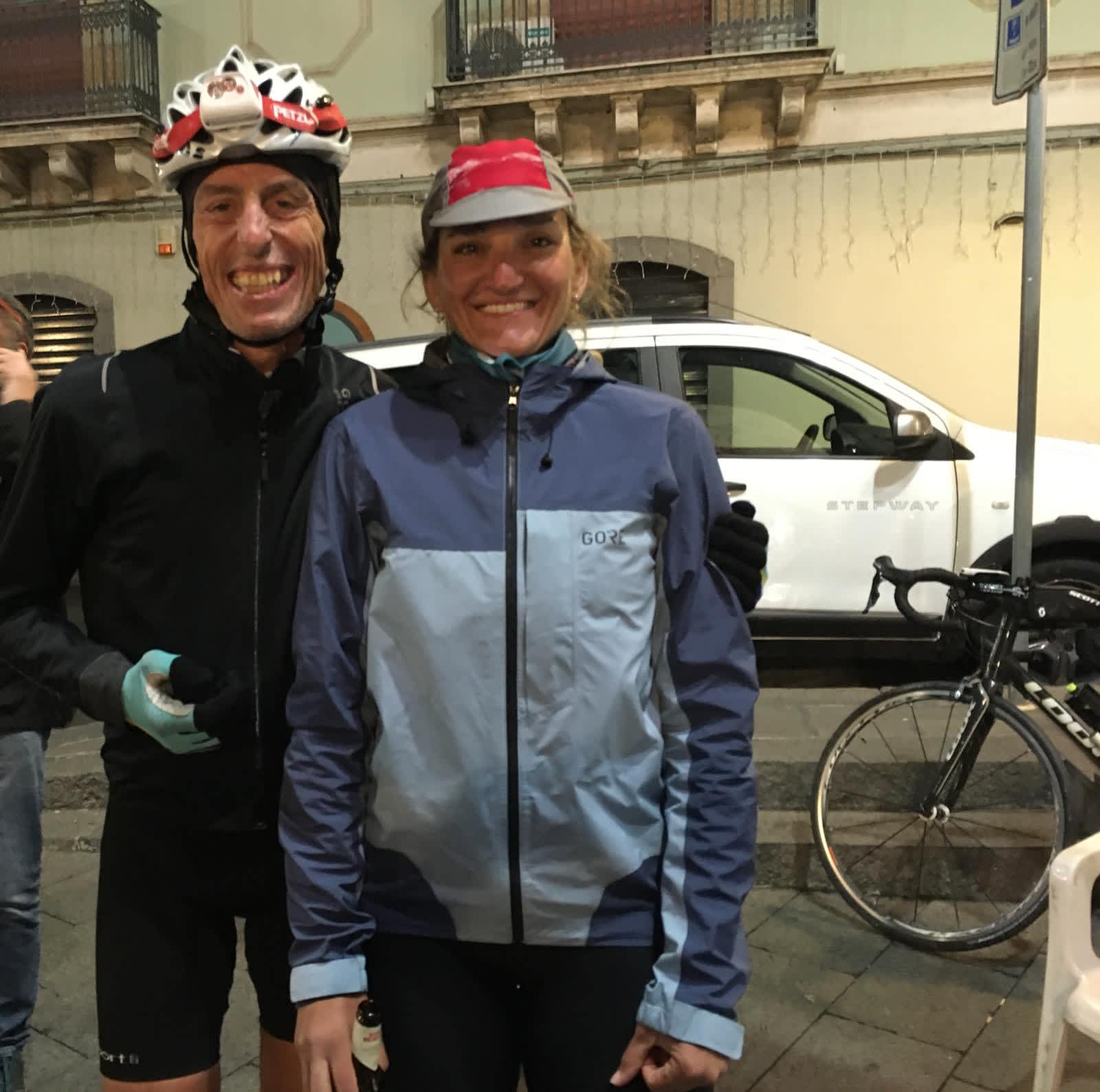 📷 Celeste Jones - Luigi and Pamela at the finish! 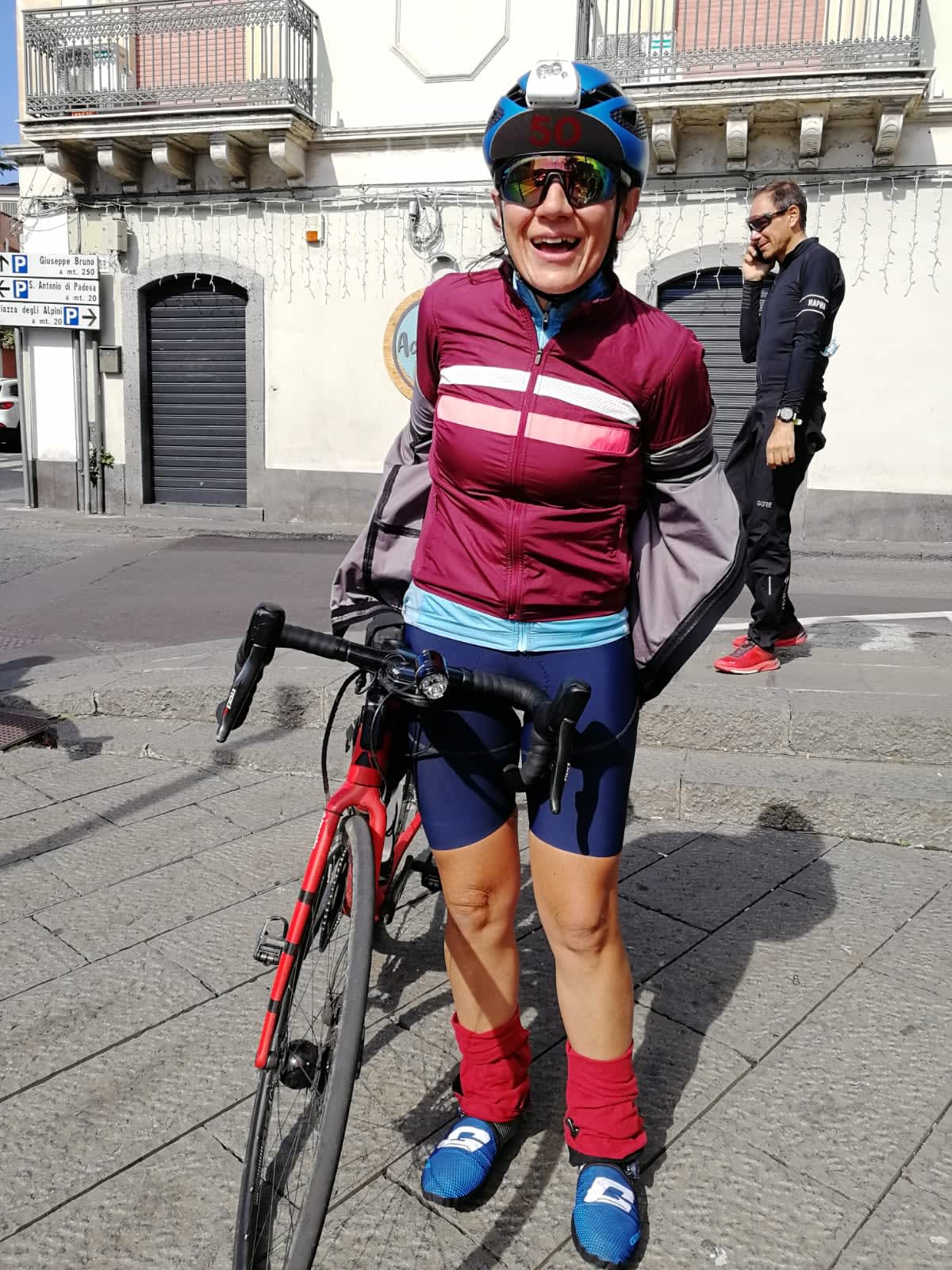 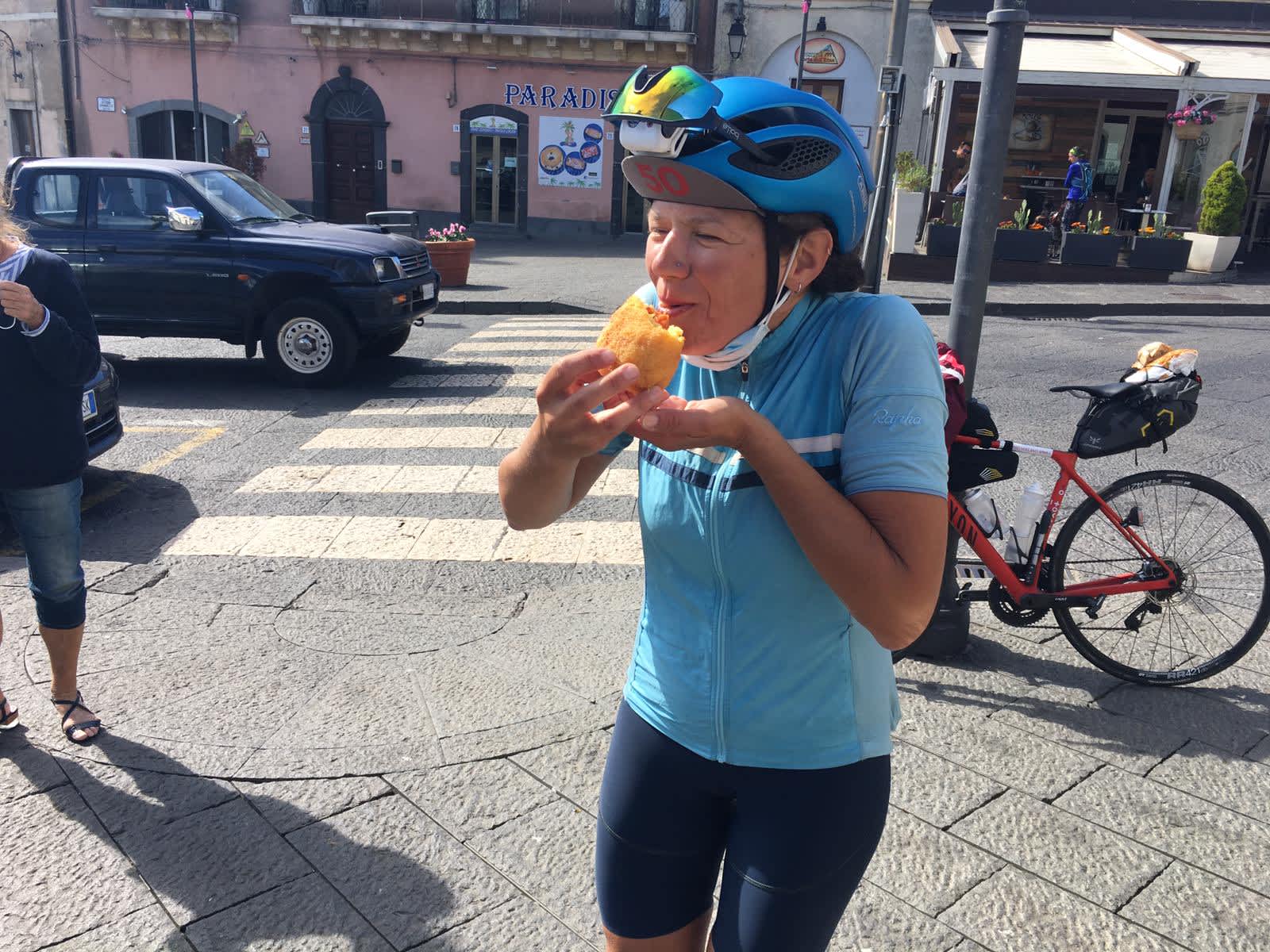 Adrian O’Sullivan finishes in 102 hrs 33 mins. Massive congratulations for coming back after scratching last year, and absolutely smashing it! 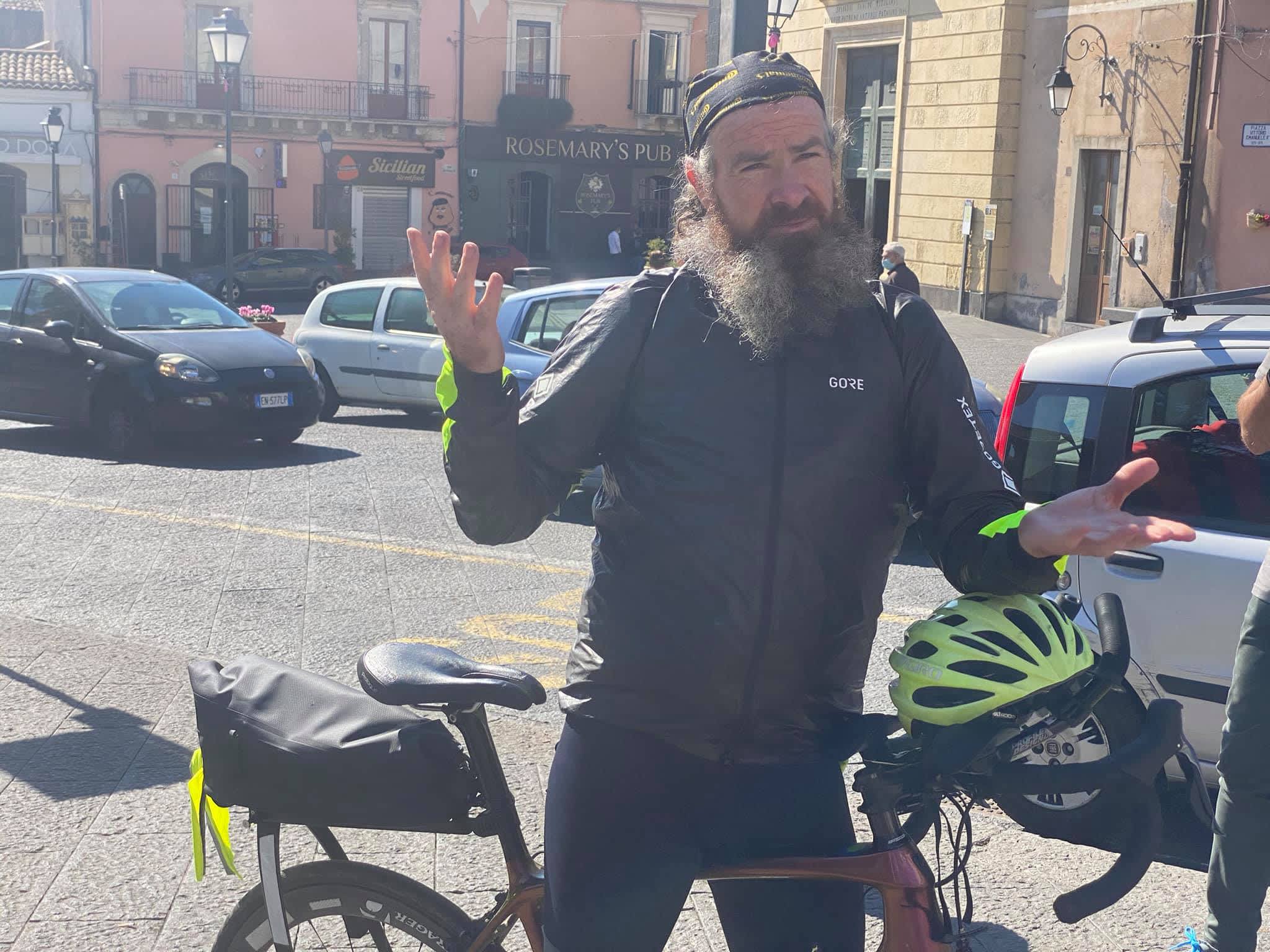 📷 Niel Copeland - Adrian at the finish

Matthieu Lifschitz joins Adrian in Nicolosi and gets to enjoy a well deserved beer and arancini. 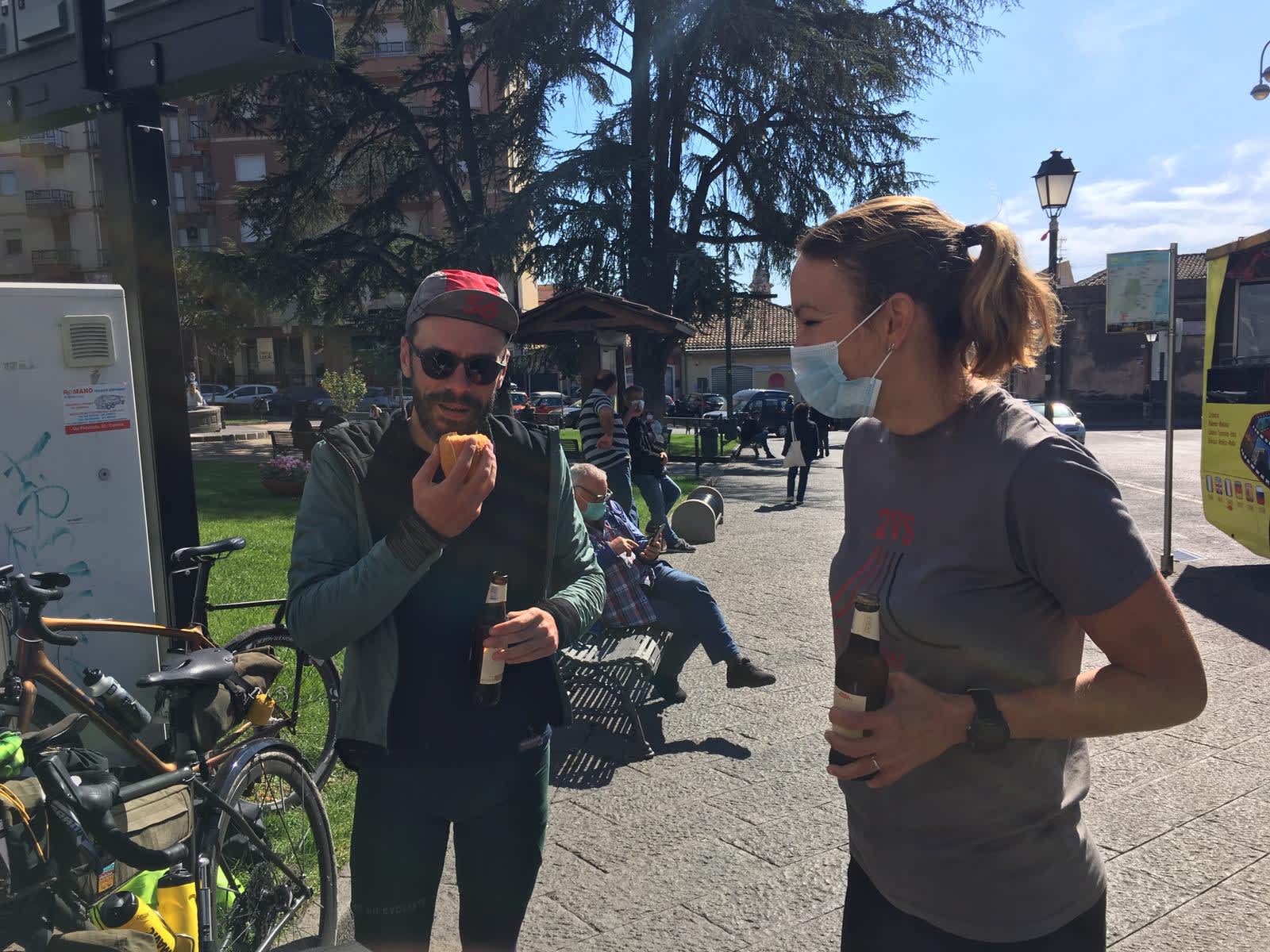 This morning's sunrise was the fifth the riders have seen since starting the race early on Sunday. Overnight, the last riders have been making their way to and through Sicily to join those finished in Nicolosi.

Since out last update, Nicky Shaw, Julien Gravaud and Markus Kroell have all finished, with Nicky becoming the third solo woman to cross the line.

Adrian O'Sullivan looks to be the next rider to summit Etna and begin the final descent. Behind him are fourteen other riders, eleven of which are in Sicily.

Riders have been rolling into the finish in Nicolosi throughout last night and today. Those finished find have been greeting incoming racers, exchanging notes from the road and waiting to welcome the next road-weary rider in.

Twenty-one riders have now finished, Thomas Ceyrowsky and Niel Copeland since our last update. Niel described the experience as "absolutely savage" and "the hardest thing I've ever done".

Nicky Shaw is nearing the top of Mt. Etna and looks to be the third solo woman that will reach the finish. The rest of the field are either facing the final 200 km in Sicily or are bearing down on the ferry at the bottom of the Apeninnes. 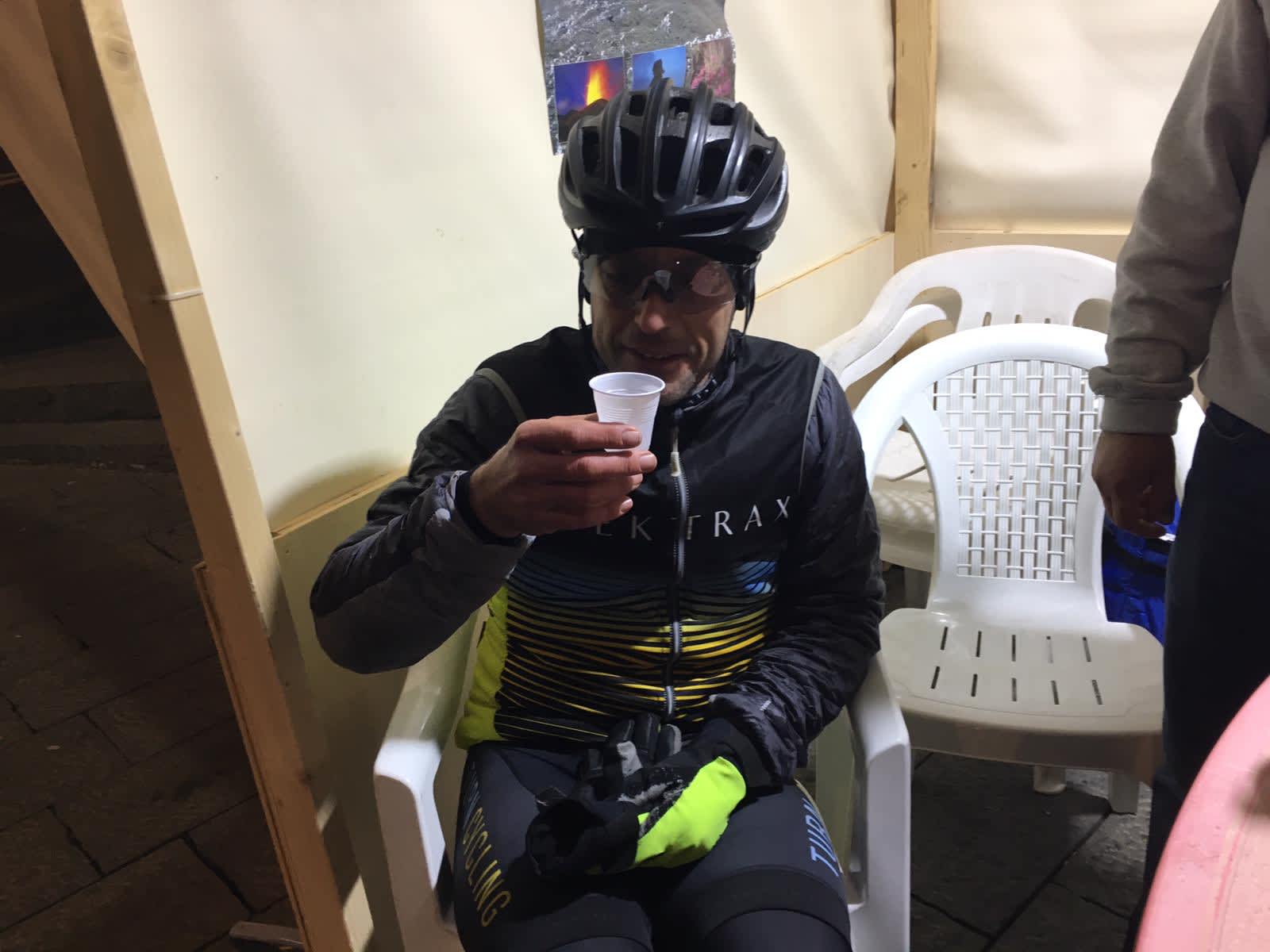 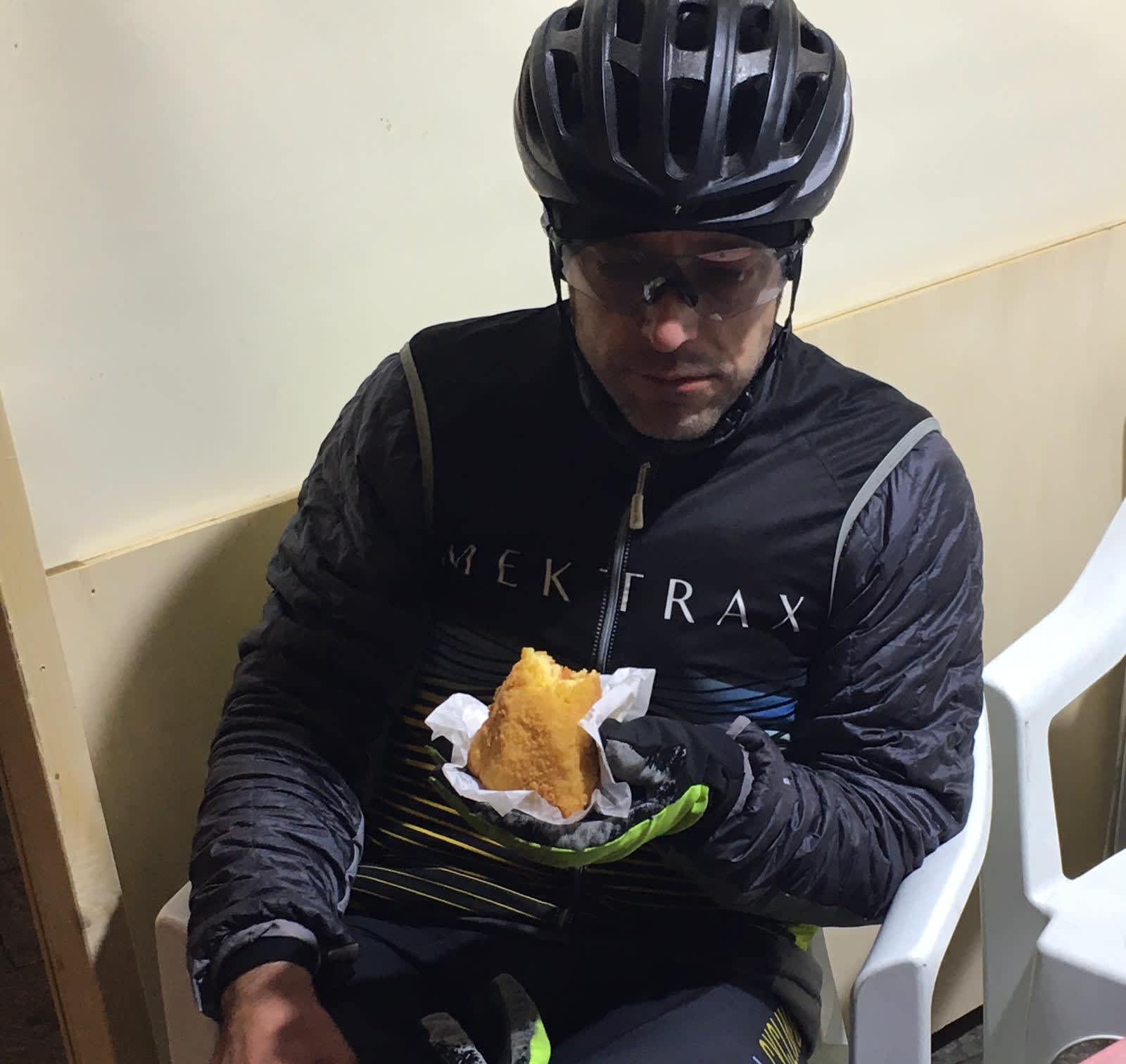 📷 Celeste Jones - Neil Jones with a shot of grappa, and a hot arancini at the finish