The Two Volcano Sprint is a single-stage, self-supported, road race from Mt. Vesuvius to Mt. Etna in southern Italy. The race starts on Sunday the 18th of October at 05:30 am. The set route is masterminded by race director Juliana Buhring, and runs for over 1000 km with 24,000 meters of elevation gain, crossing variable terrain.

Riders will start from the foot of Vesuvius, an active stratovolcano on the Gulf of Naples, part of the Campanian volcanic arc. The route moves south through the Valle Delle Ferriere and along the Amalfi and Cilento coastal roads, towards the town of Scalea.

Scalea is where the climbing starts as the riders head up in to the Apennine mountains. The orogenic Apennine mountain belt, forms a central spine across the country, thrust up upon the closure of the Tethys Sea.

After the Appenines, the riders reach Villa san Giovanni in Italy’s far south, where they will board a ferry to Messina, Sicily. From Messina, the final push to crest Mt. Etna and descend to the race finish in Nicolosi begins.

In 2019 Fiona became one of the most respected riders in the endurance cycling field whilst winning TCR07 outright. However, it was not just the win that people admired, it was also the pure determination and positive attitude that accompanied it.

After pulling out of the TVS in 2019 and the postponement of TCR08, it will be interesting to see what Fiona will bring to the race!

James Hayden has been racing in unsupported ultra-endurance events since 2015. After back to back wins in the TCR James has shifted his focus to off-road racing (including Silk Road and Atlas Mountain races), including a joint-first in the Italy Divide, and recently, a first in Further.

James scratched in his most recent race, Transiberica's Badlands, but has since ridden the Tour du Mont Blanc, so hopefully James will make the glorious return to ultra-racing on the road that we would all love to see.

Sofiane is a rider who has found major success in offroad endurance racing – finishing in 3rd place in the Tour Divivde, and more recently winning the BikingMan IncaDivide and the Italy Divide (joint 1st with James Hayden). Additionally, in 2020, Sofiane won the inaugural Atlas Mountain Race on a famously low sleep budget, and later won the French Divide and came second in the Three Peaks race.

All three riders from last year’s podium return to this year’s event to battle it out in Southern Italy once again. All three faced hardship last year, bringing their bodies and bikes very close to the limit in order to reach the finish in Sicily.

Ulrich will be looking to build on his successful 2019, however in recent weeks he learnt of a fractured rib and torn muscle fibres in his pectoral muscle – fingers crossed he recovers in time!

Fanny Bensussan was the first women to complete the Three Peaks Bike Race 2020 in a really strong ride.

Ana Orenz was the first female finisher at Transiberica's Transpyrenees race and the Paris-Brest-Paris Audax in 2019. This year she took to a triple-everesting for her ultracycling kick.

Bruno Ferraro is racing TVS fresh from the 2020 editions of the Transiberica Ultracycling's Transpyrenees and Badlands events.

TCR vets Jonas Goy (3rd, TCR05), Stephane Ouaja (TCR07, 06, 05, 04, 03) and Christoph Furbach will all be starting. Christoph has also come second in the last two editions of the Transpyrenees race. This years third placed rider Joe Rass-Court will also be on the start.

Aside from the top three from the TVS 2019, several other riders are returning this year: Robbie Britton (4th), Barry Scott (5th), Pamela Cepparulo (6th, Pair), Adrian O'Sullivan and Bryan Averre. Whether they are coming back with vengence, or for more pizza, we are soon to find out.

The 2019 TVS was the first edition of the race and burst on to the endurance cycling calendar in some style. 17 riders started the race, with only 6 managing to cross the line in time for the finishers party. Two of the pre-race favourites Fiona Kolbinger and Bjorn Lenhard had both pulled out before the start and excitement rose about the battle at the pointy end of the race.

Ulrich Bartholmoes took an early lead in the race, hardly stopping in the first 36 hours, whilst Andrew Phillips and Adrien Liechti jostled for second. Additionally, Mary Mackay and Pamela Cepparulo were closely matched throughout, separated by only 15 km on day two.

Ulrich continued to lead the race all the way to the slopes of Mt. Etna, when an old knee injury began to slow his progress. With Andrew riding through most of the night, Ulrich's lead was diminishing. 40 km from the finish, further problems struck for Ulrich, in the shape of a severe case of Shermer’s neck.

Despite these troubles, Ulrich made it home first in a time of 59 hours and 58 minutes, adding to his two previous 2019 wins. He described the 2VS as harder than both the Transiberica and the Transpyrenees put together. Andrew Phillips finished second and summarised the race in three words: “Holy. Baby. Jesus.” Adrien Liechti completed the podium crossing the line in third.

Some pre-race reading and videos to whet your appetites:

### Have you heard of the Two Volcano Sprint?

“From the dark land of Vesuvius and the steep climb of Monte Faito, to the luxurious Costiera Amalfitana, Sorrento and the ancient ruins of Paestum. Crossing Calabrese forests and rural villages, the ferry to Sicily and the mighty Etna...such a big adventure with strong riders challenging and struggling trying to make it to the finish.”

Today was registration and briefing day for the riders! Caps and race packs were handed out, and temperatures were taken. Riders have travelled from twelve countries by plane, train, car and ferry! Fingers crossed riding a bike will be the simple bit! Check out some of their set-ups here.

A few riders however, including Fiona Kolbinger, have unfortunately not been able to make it to the start - so we hope to see you there next year!

The race starts tomorrow at 5:30 am. See you then!

The Two Volcano Sprint 2020 has started! The riders are currently an hour in, after a fast start descending down the flank of Mt. Vesuvio and joining the flatter coastal roads. 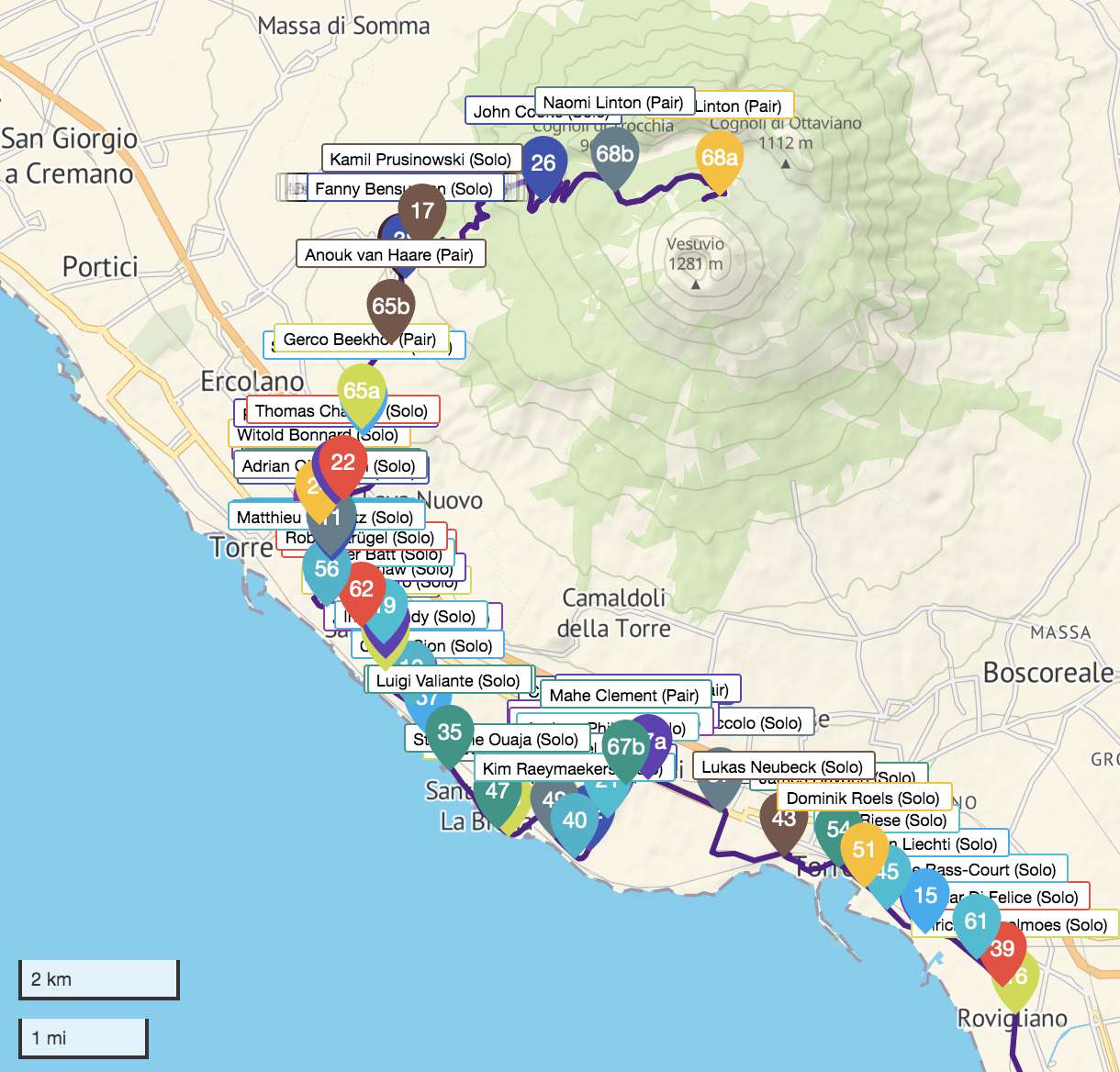 Rider no. 33, Patrick Doupe, has suffered an early mechanical with his rear hub breaking. Patrick is currently waiting for a local bike shop to open for the day so he can get a replacement.

The first 340 km of the route is the flattest section of the course. At this time, the riders have already climbed and descended Vesuvio quickly, and are now attempting to use the flatter coastal roads to gain some early time.

However, to break up the flatter coastal roads early on, there is a steep 1020 m climb out of Castellamare di Stelia to deal with, Mt. Faito.

This climb is followed by a descent down in to Salerno, and at least 200 kms of coastal road. The sun will be up on this portion of the course so expect some spectacular photos!

Mt. Vesuvio (Vesuvius) is the start point of the two volcano sprint. Riders had to climb and then descend the flank of the volcano. Vesuvius is still an active volcano, sitting ominously above the Bay of Naples. It's notority come largely from the 79 AD eruption which destroyed Pompeii and Herculaneum. The most recent eruption was in 1944. 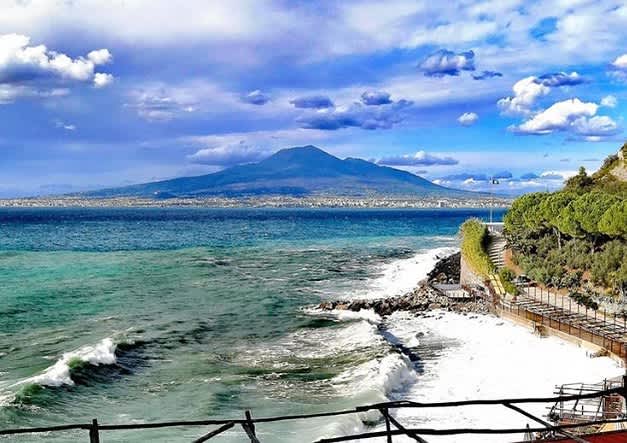 The sun is up and the riders are starting to crest Mt. Faito and start the descent in to Salerno. There are rumours of dogs waiting at the top of the climb and hunter's gun shots ringing down the valley.

Positions at the front keep chopping and changing, however it looks like Ulrich, Sofiane, Joe Rass-Court and Omar Di Felice have created a small gap to the riders behind.

India Landy was the first woman to crest Mt. Faito. 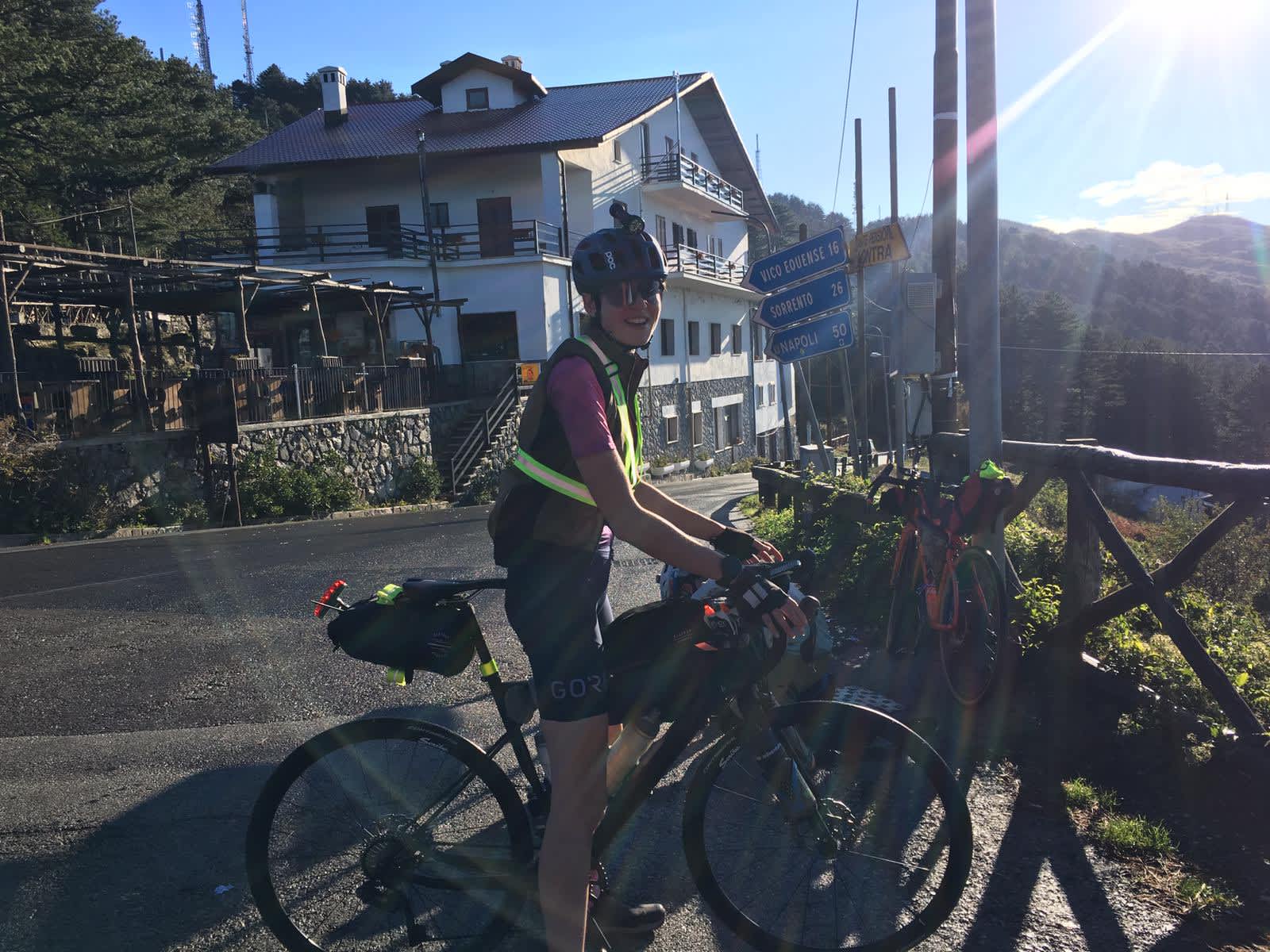 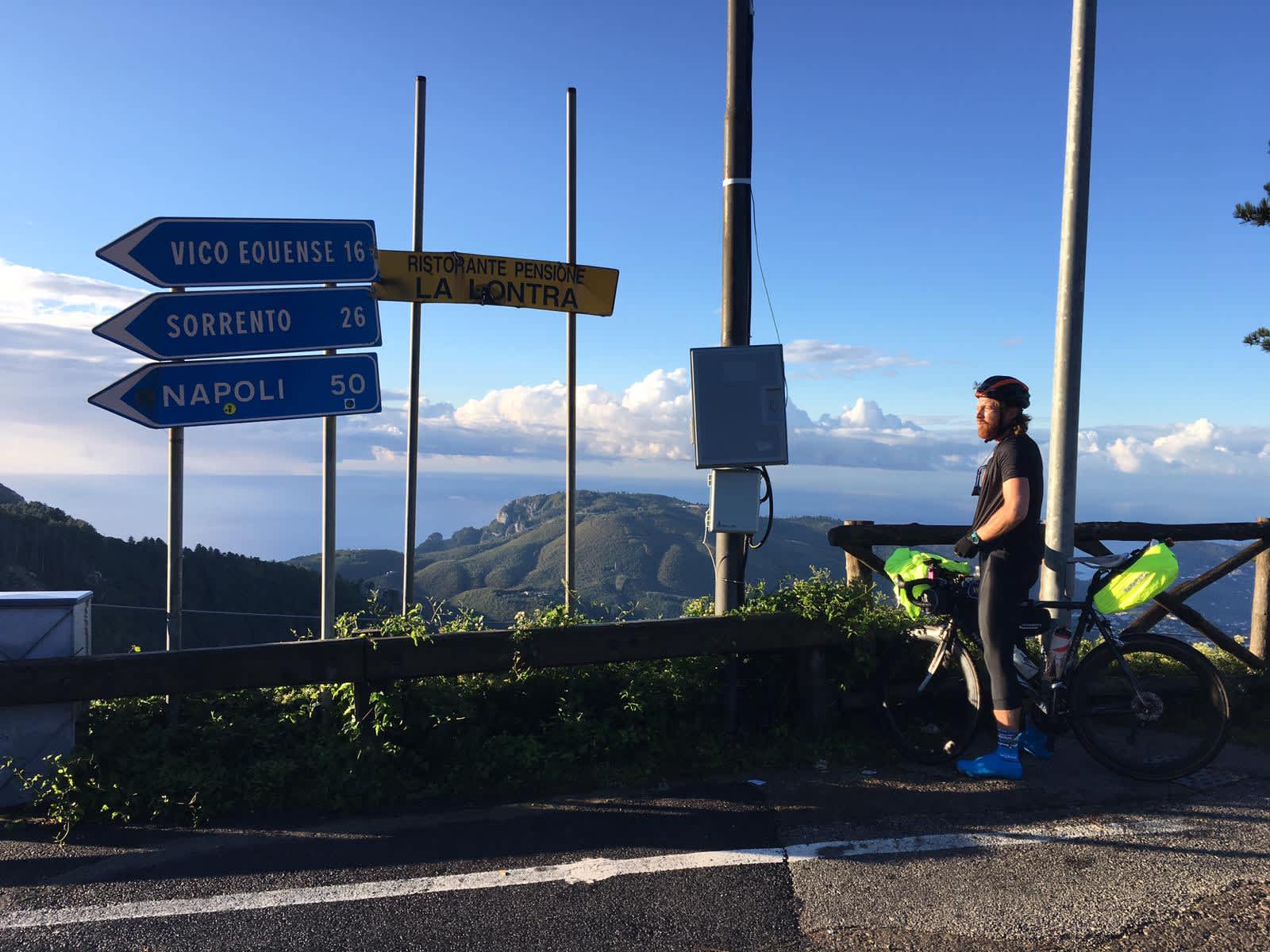