Now that the dust has settled on the 6000+ bikes that conquered the roads of northern France, it's time to reflect on the experience of the 19th Paris-Brest-Paris. Based on many eyewitness accounts, it was one of the most difficult editions of the brevet with many citing the brutal headwind on the first day and the relentless undulating nature of the course.

The attrition rate is the highest since 2007 when there were torrential rains and the organisers granted a 2H grace period on control times. This year, riders weren't so lucky and were still required to make their cut offs. This resulted in a large number of riders scratching early on realising their fate or continuing the course and finishing out of time.

The fastest completion time for PBP is 42H 26M and was set by ultra-endurance rider Björn Lenhard back in 2015. This year's fastest time was 43H 49M ridden by fellow German Hajo Eckstein who was on a velomobile, so while the headwind marred others' attempts of beating this time, Hajo was still 1.5hrs behind Björn's record that he set on a standard bicycle.

There were rumours swirling around after the finish that this year's course was much harder than in previous years. A late change to the starting venue (St-Quentin-en-Yvelines to Rambouillet) meant the route had extra hills that were previously omitted. Based on a few riders' Strava activities from 2015, there was an extra 1000m of climbing in the 2019 PBP. It may not seem much over 1200km but each extra slope adds to the cumulation of fatigue.

As the brevet unfolded, it was clear riders from Asian countries were experiencing a culture and climate shock. While the European and North American riders rode in shorts and short-sleeved jerseys, their Eastern counterparts donned every thermal piece of clothing they owned often sporting buffs in the heat of the day. Come night time, the temperature dropped sharply and riders draped themselves in emergency blankets and sought shelter against the warm bricks of homes on the roadside.

Divya Tate, the Indian representative to Audax Clup Parisien (organisers of PBP), explained why her compatriots found the route so difficult.

"Our numbers were worse than in 2015 despite having a much larger group. Our Indian brevets can't replicate the navigation and elevation of European events," remarking that longer brevets are often out-and-back routes sometimes along a highway due to lack of infrastructure.

While there were many heroic efforts from the Indian riders both at the pointy end and towards the lanterne rouge, Divya confirms that it was particularly challenging for a whole host of reasons. "Of the 300+ people from India, most have only been cycling for a couple of years, most have never travelled outside of India, the food is alien (compare it to if European riders were to eat only spicy food on a 1200km brevet!) and the climate has never been experienced by most."

She continues, "cycling as an activity in India is just coming out of naissance. In 2011, when we first participated, most of us had just graduated from mountain bikes and clunkers to road bikes, but we knew nothing. There were no spare parts available in India and no mechanical skills. Things are better now but the cycling ecosystem can only be described as infantile in comparison to 'first world'!"

At the heart of Indian cycling is the changing culture which is why the number of riders has jumped so rapidly over the years of PBP. "Sports in general, and particularly for leisure have not been a part of our culture - it is a luxury for people with spare time and money. India does not perform at ANY international sports except cricket! But there is a huge social transformation underway and this is ground work for the next generation."

It wasn't all headwinds, cold nights and suffering though. The general mood around every control and among riders on the road was jubilation. Smiles for miles, chatter among new friends and roadside admiration for those toughing it out on their bikes. Locals lined the streets to clap the riders through their villages, some provided free water, coffee and cake to anybody stopping by while others enterprised with a marquee full of all the delicacies one can expect while travelling through France. 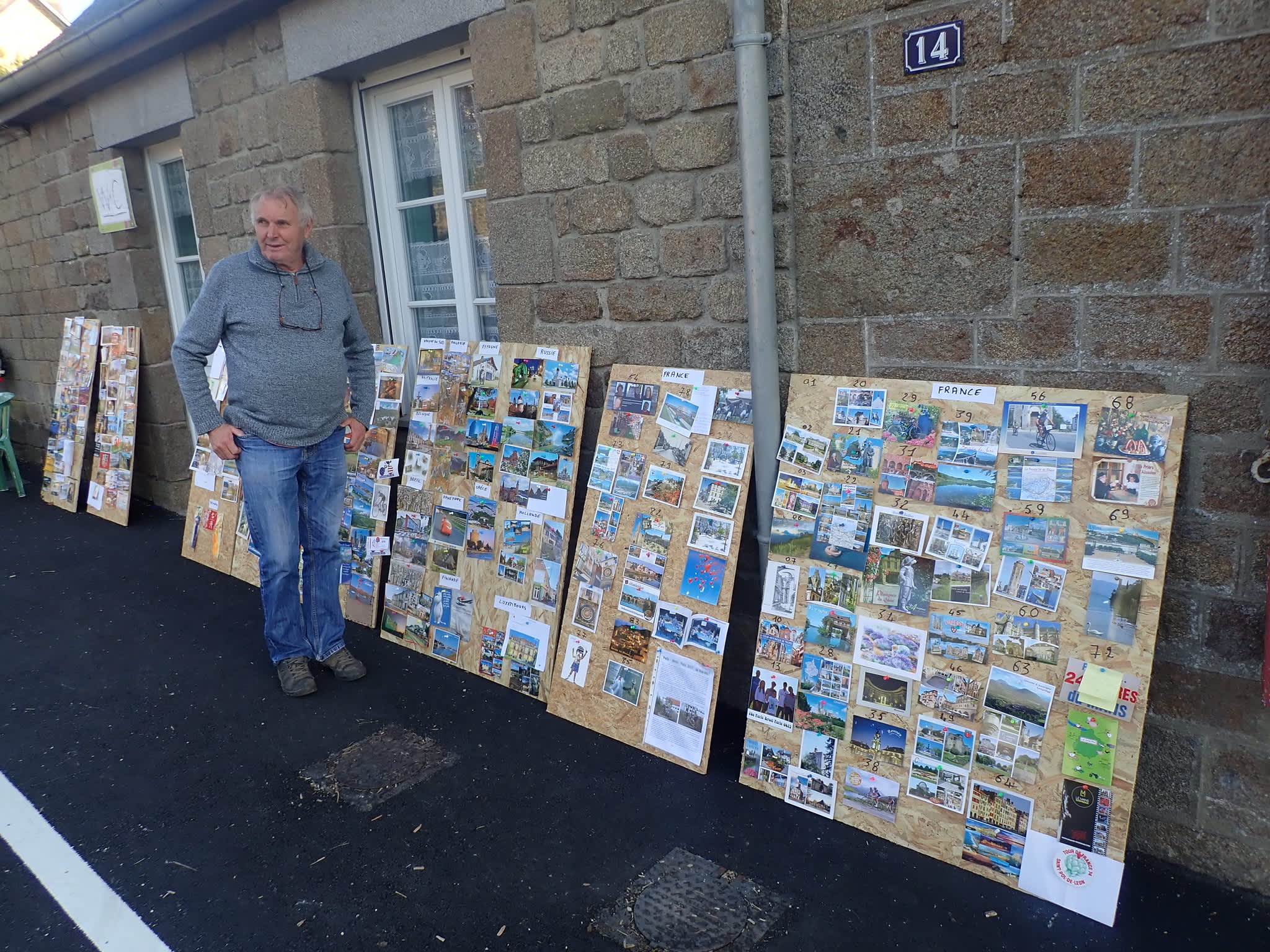 A man displays his postcard selection on the side of a road. He asked anybody stopping by to send one from their home country. Credit: Mikko Mäkkipää 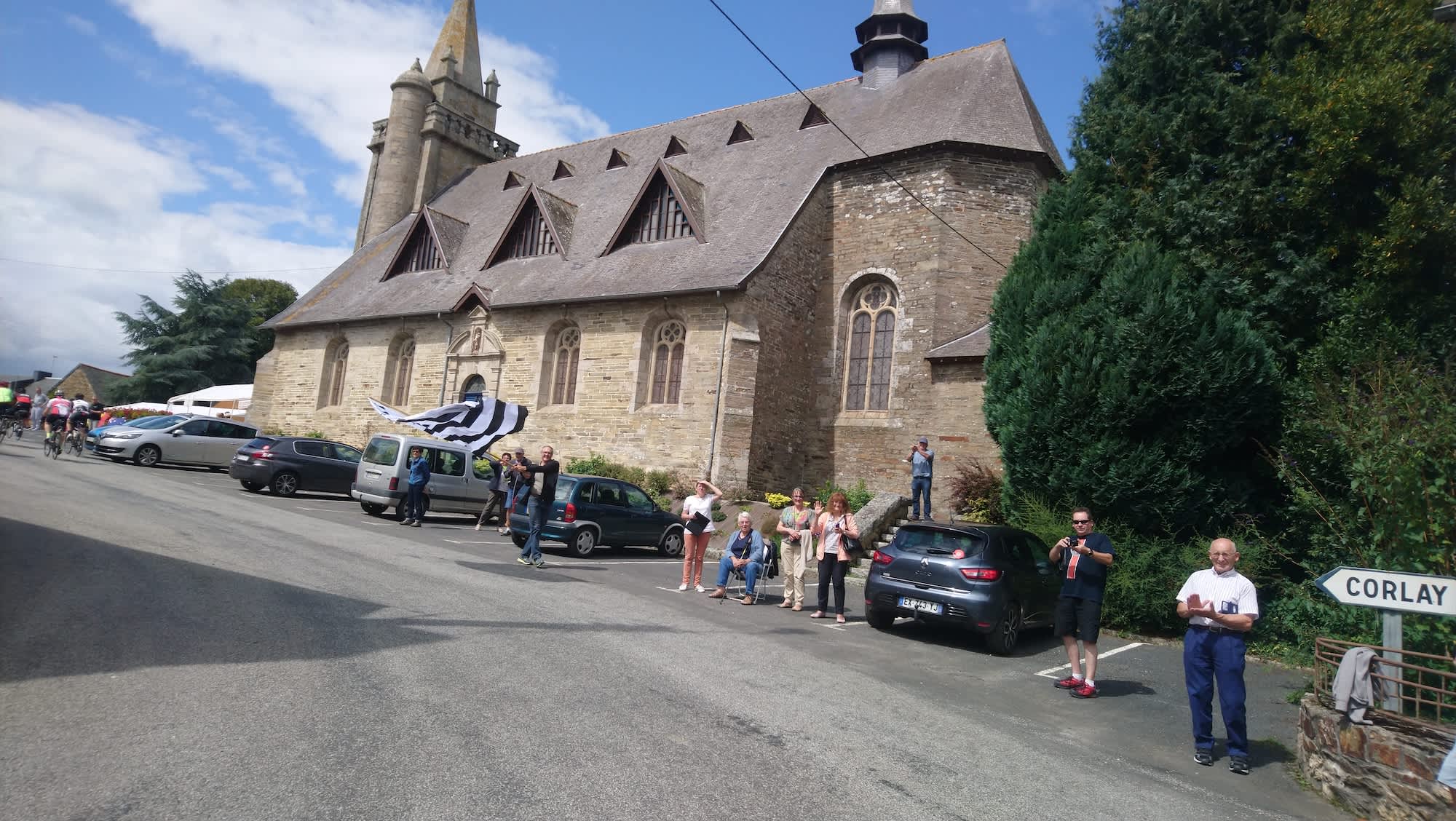 If you have a spare 40 minutes, it's worth watching Adam Watkins' vlog of his PBP. He rode the event fixed in the 90H wave.

In among the finishers were some really quite outstanding achievements. A 1200km bike ride is no easy feat no matter which way you look at it. We already doffed our caps to Hejo's fastest time earlier on but what were the other stand-out rides?

But unlike races, PBP does not acknowledge fastest times and for good reason. This event is about a journey across north western France and the four-yearly repetition of this historic event ensures the stories continue. It's not as easy as deciding that you'll ride the event six months from the start, instead a rider must dedicate the 18 months prior to succeeding in this event by means of a pre-qualifying ride and a subsequent Super Randonneur series beforehand. Therein lie more stories.

It is one of the few events to permit special bikes and with that comes a variety of riders all with their own unique tales to tell. Age is also no barrier - there was at least one 80-year-old person to roll out of Rambouillet this year. More women than ever before entered this year's PBP and it was noticeable.

Paris-Brest-Paris is a special event deeply respected by the randonneuring world. In the words of Mike Hall, "nothing worth doing is ever easy" and Paris-Brest-Paris fits that slogan perfectly.