A day of firsts

Italians Federico Damiani and Andrea Galanti take the crown as the first pair to cross the line in Sidi Rabat. They were second to The Lechugas for the whole race but as is the case with ultra-distance events, attrition is a huge factor in the results.

Second place went to Brits Mitchell Jones and Scott Cornish and third place to Germans Marc Lehmann and Alexander Bethge, the latter who arrived at around 10:00 local time. 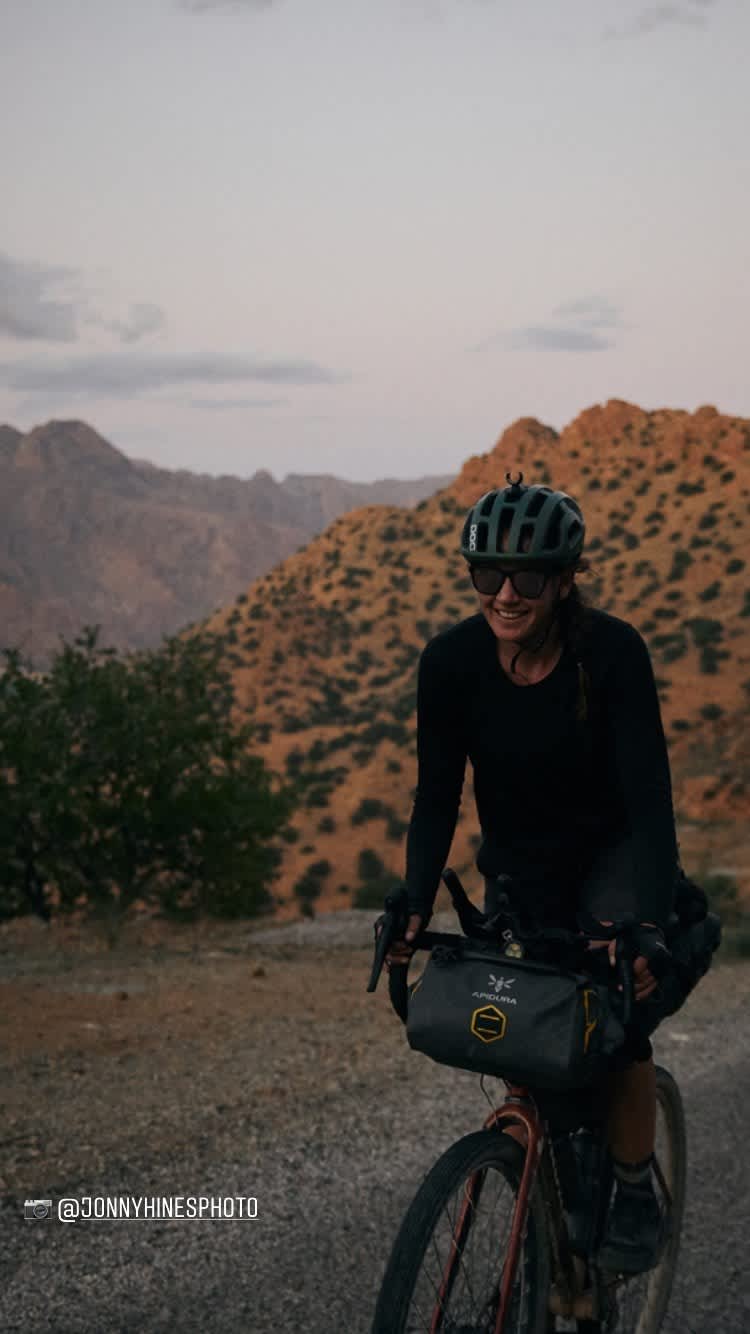 Jenny is a rider with grit and determination running through her veins. She got to Sidi Rabat just after midday local time. Andrea Seiermann is pushing through her wake and will be at the finish line within a couple of hours.

Catch up on the AMR Podcast

Stefano has posted 4 episodes now and we're told more are to follow to keep your ears out for those.

Thanks for joining us

This update concludes our coverage of the AMR2020. It's been a thrill to deliver live coverage over the last week. DotWatcher will be back in May with Italy Divide and a whole host of other races - stay tuned!

Yesterday saw a flurry of riders make the finish line in Sidi Rabat. Off the back of his win, Sofiane uploaded the final instalment of his journey to Strava which reveals he burnt over 7000 calories on that stretch alone!

Jenny Tough looks to be holding her own, though we have no info of how she's feeling. Expect her to be rolling through CP3 in a few hours' time and on to the finish late tomorrow. Andrea Seiermann is just 60km behind her.

In the pairs category, the Italian duo of Federico and Andrea are chugging along nicely having just ticked over the 1000km marker. Behind them, to the tune of only 20km, is the British team of Scott and Mitchell.

The few scratched riders have gathered together to ride to the finish line together in time for the party on Saturday. It's been a great display of camaraderie throughout the race and sometimes things don't go to plan. The best thing you can do afterwards is make it into an adventure like these riders have done and it's all in the name of making new friends.

p.s. this is the same Chris Herbert who spent a full 12 hours with food poisoning days earlier so it's great to see he's back to his usual antics.

On next to no sleep for the entire race, Sofiane Sehili becomes the first winner of the Atlas Mountain Race.

It was a great showdown between two riders at the top of their game and who we've seen fight for a 1-2 before. Sofiane may have won this battle, but I dare say the war continues and I for one am looking forward to their next showdown.

Jay Petervary rounds out the podium

Sneaking past Klaus while he got some rest, Jay made his move to claim his podium position. At the time of writing, Jay is still 50km from the finish but Klaus is 50km behind him, so I think it's safe to say Jay will get bronze.

Gutted to hear The Lechugas had to scratch! It's a race between Italy, the UK and Poland for pairs podium places with just 10km separating first and second placed pairs and a further 20km for the third placed Polish pairing.

James admits defeat...or does he?

We asked on Instagram and Twitter whether you thought James might catch Sofiane and it looks like you're not a very optimistic bunch. Shortly after we posted the polls, James took to Instagram to concede defeat saying he's proud of second place.

I can't help but think he might be calling Sofiane's bluff but in any case second place is more than admirable.

Based on the fact Sofiane has covered 1054km in 84 hours, it could still be another 7 hours (ETA: 04:30 local time) until victory is his. However with adrenaline running through his veins, no major climbs to overcome and the promise of a warm meal and comfortable bed, I think we're looking closer to 5 hours from now.

Jenny is through CP2

So far, Jenny Tough is the only solo woman through CP2. Second placed woman, Andrea Seiermann is around 40km away. Jackie and Quinda are within a few kilometres of her. Riders have until 21:00 local time tomorrow (19th Feb) to get there.

It’s downhill from here (kind of)

The gap between Sofiane and James has stayed fairly consistent all day at around 60km. Some back-of-the-envelope maths has an ETA at the finish of around 2am. Looks like I'll need to set an alarm...😴

Sofiane is in good spirits and if you haven't checked his latest Instagram Stories, you're in for a treat. Every day throughout the race he's been posting a video of himself singing a different Lionel Richie song - what a multi-talented athlete he is!

On a serious note, James got a little more sleep than Sofiane last night and given they're ~4hrs apart, James could have the legs to chase him down.

Meanwhile, the leaderboard has turned out to be a bit like Noah's Ark with riders coming in two-by-two! A race for 3rd place continues from yesterday with Klaus and Jay having a little do-si-do on the trail. They're within 4km of each other! Carlos and Adrien are racing for 5th and they're around 6km apart. Joeri and Manu are hanging in for 7th and a little further back again, Jonathan Rankin and Neil Henderson battle for 9th.

Jenny Tough has extended her lead to almost 75km up from 30km yesterday. Quinda appears to have slowed for some reason (we're not sure why) and it looks like she'll join Jackie and Andrea in the race for podium places. 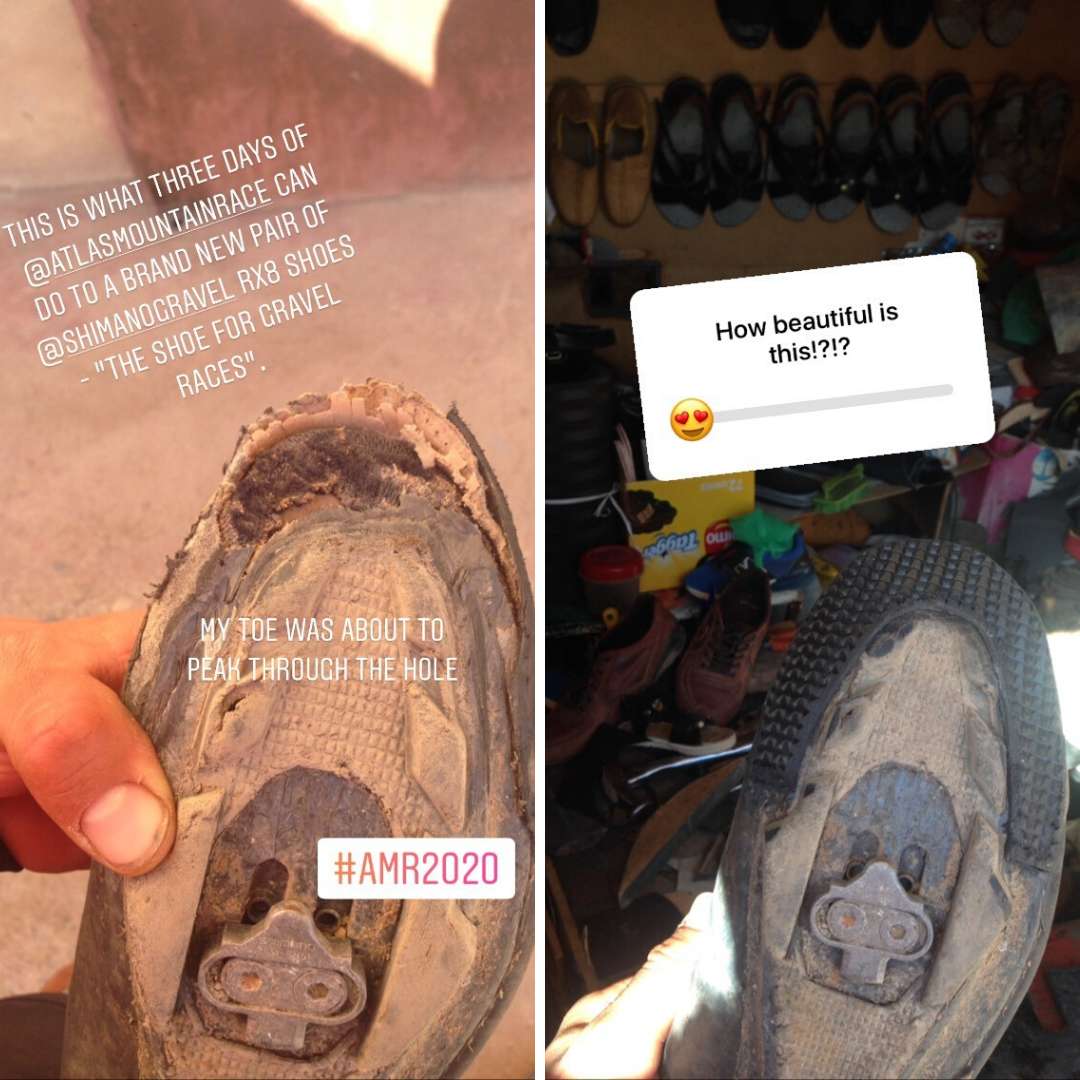 Andrea Mehteh ended up needing to find a local cobbler to fix her very sad excuse for a shoe but he did a fine job as it turned out!

While you were sleeping - He...he also slept?!

Now we don't want to jump to conclusions or anything but it looks like Sofiane actually stopped in one place for an hour last night. Could it be a tracker glitch? Did he actually close his eyes?

How can he leave us hanging with a caption like that?!

In any case, he still has a strong lead of 60km, though this may be about to increase as James Hayden takes a bitter-sweet break. Looks like he had a mechanical this morning but he's all fixed up now, so he'll be in hot pursuit of his rival after a can of coke. 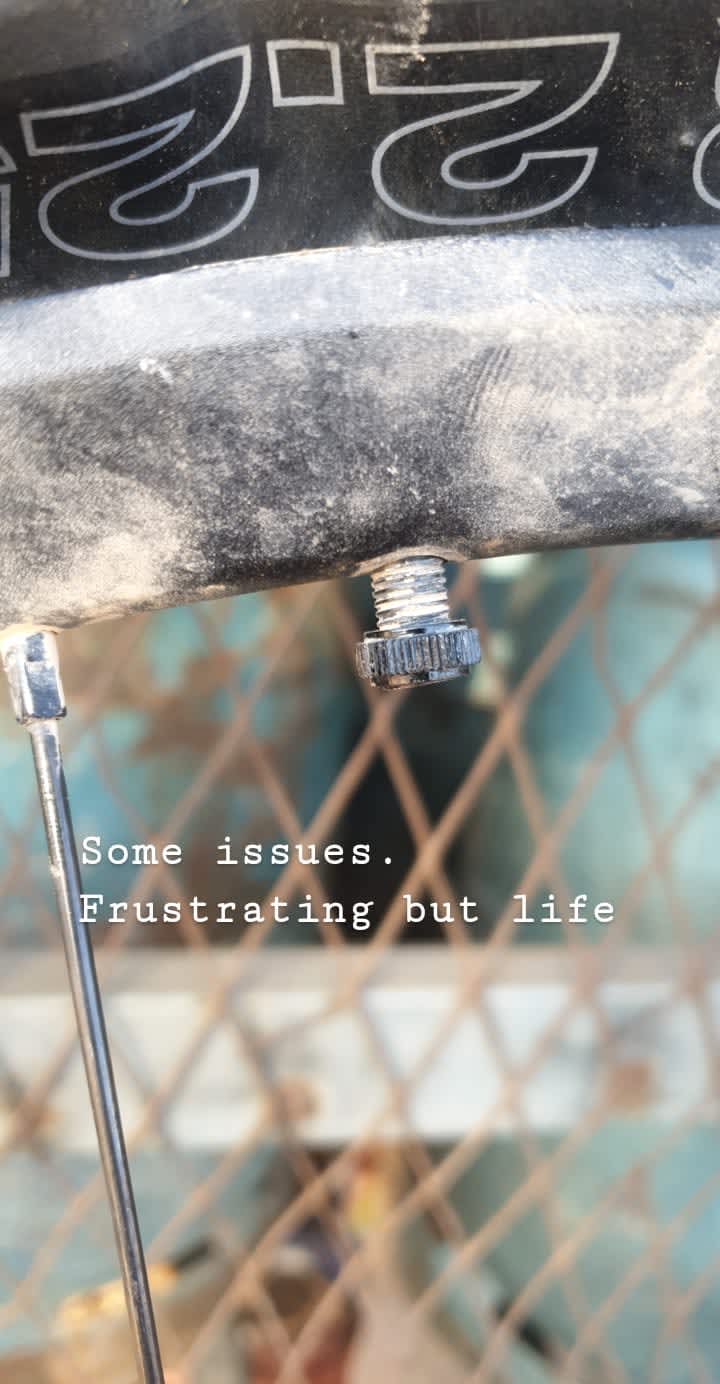 Last night's Race HQ update provided a bit more info about the other riders on the leaderboard including Laurens, Joeri and Klaus.

Klaus Thiel and Jay Petervary are currently neck and neck as I write. Based on the progress graphs, they both got some rest but it appears to have recharged Klaus more than Jay as he put the hammer down to catch Jay and snatch 3rd place...for now!

The road to CP3

Sofiane is (relatively speaking) a stone's throw from CP3. I expect he'll be there within a couple of hours at the rate he's going. He'll drop down into a valley and begin the ascent up to CP3 where we'll hopefully find out a bit more about last night and his plans for the final 200km.

The sole singlespeed rider, Markus Stitz, has been in touch with a few photos of his exploits in Morocco and he's having a brilliant time by the look of it. The beauty he's managing to capture on his journey through the Atlas Mountains is incredible. Feast your eyes on these... 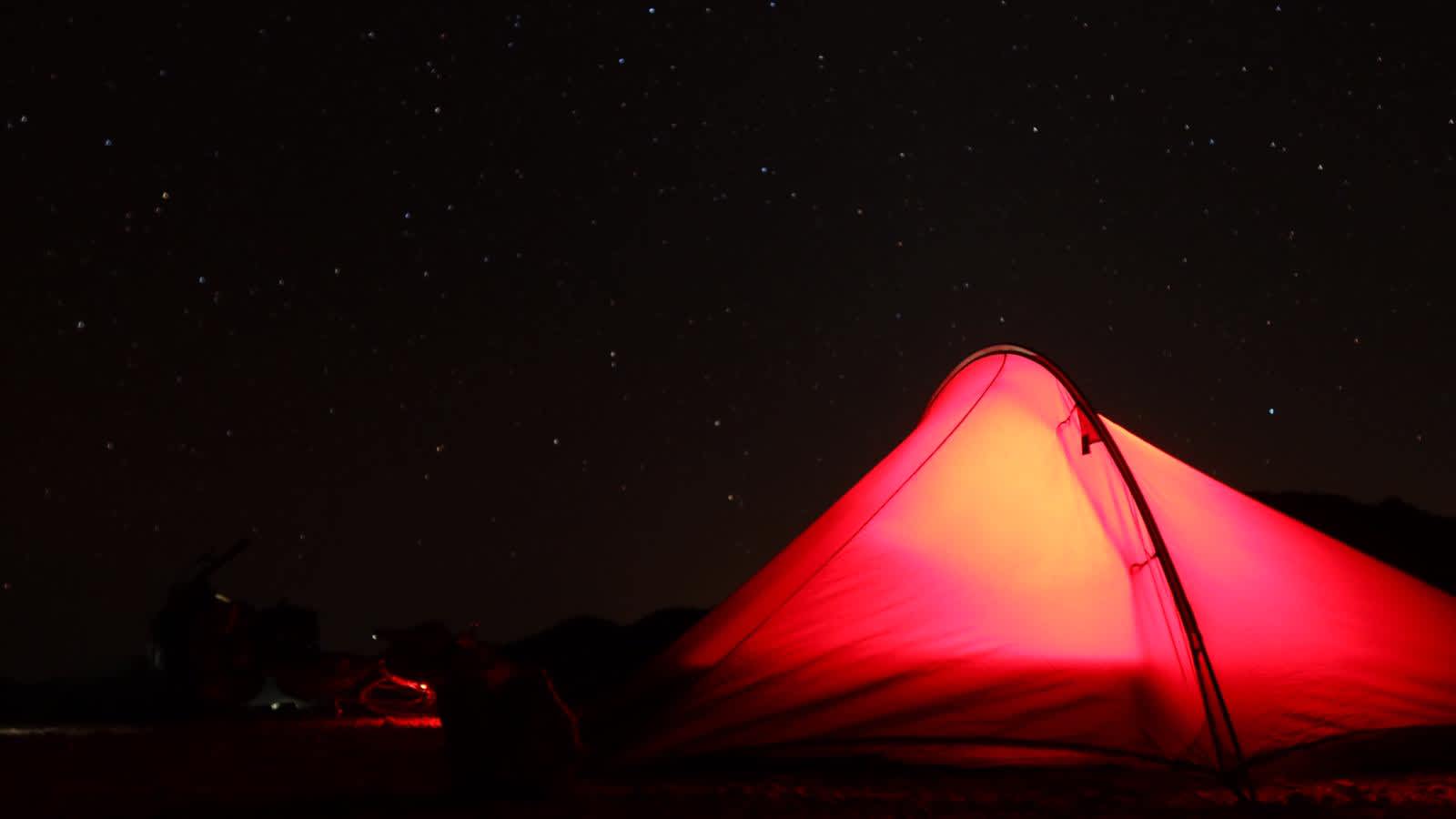 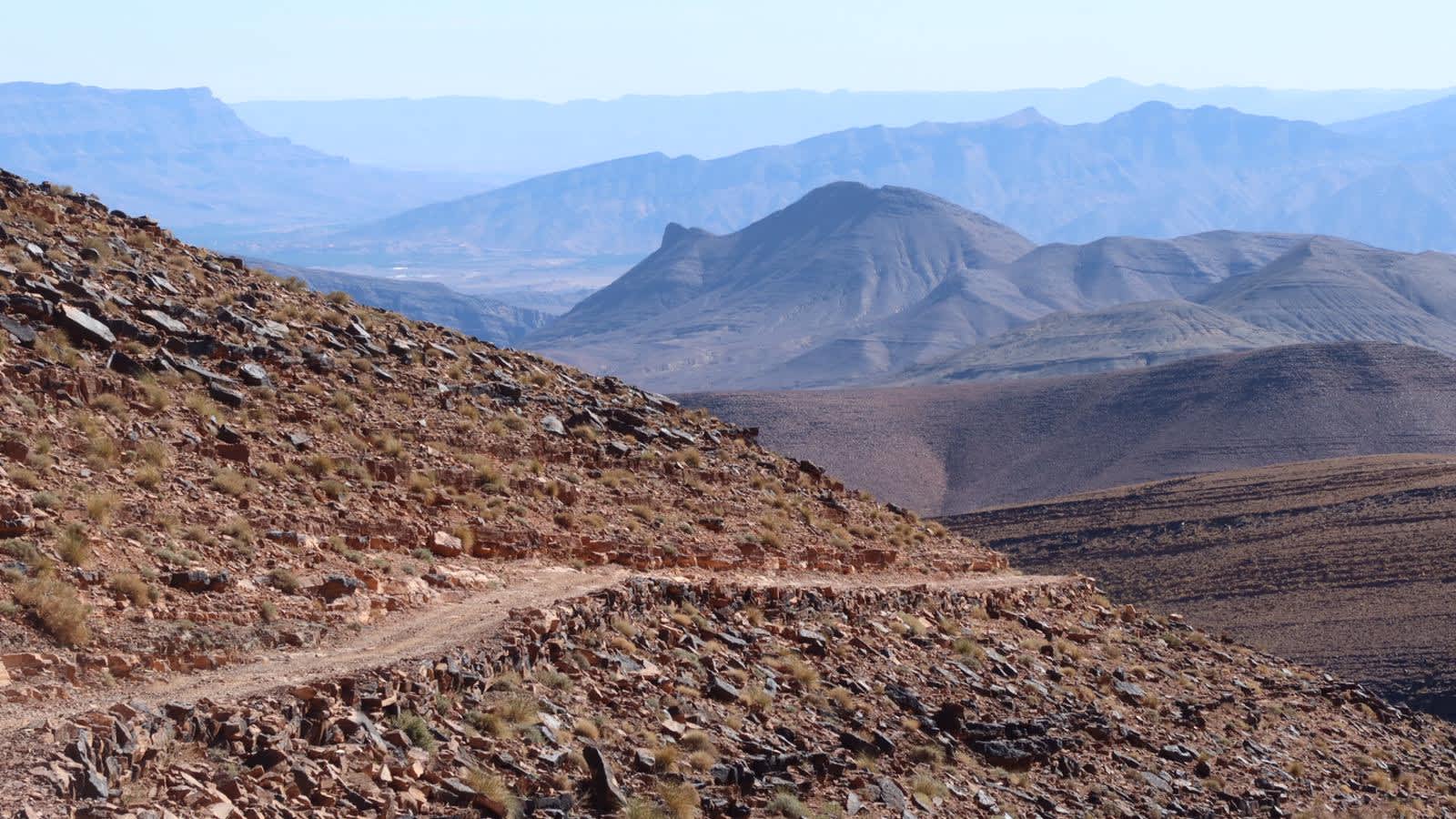 We heard a couple of days ago that the rockstar pairing of Nico Deportago-Cabrera and Chas Christianson came to an end when Nico's fork snapped. Chas forged on without his comrade like the noble ultra-racer he is but unfortunately he pulled the plug this morning in good spirits and is making his way to the finish now.

When you enter a race as a pair, you're mentally in it together. You've entered a mindset that means you'll be able to rely on someone else for emotional boosts, help with mechanicals and running into the shop for coffees. When that suddenly falls apart, it's mentally tough to keep going alone. This dream you both had about riding through a gruelling challenge together is shattered. Luckily, Chas doesn't dwell for too long and he's reassured us that his world is still rocking.

"Heyo! Gonna call it, twisted knee is not getting any better, can pedal out of the saddle, and climbing is painful... BUT the stoke is still high! So stoked to be out here!! Had a great 4 days of the race, now time to find the beach!! (But first a taxi, an adventure all in itself)"

If you're a German speaker, you may enjoy this article from pairs riders Tobias Köpplinger and Martin Moschek. They've listed every piece of kit they've taken including its weight. This one's for the gear nerds and weight weenies amongst us. For non-German speakers, Google Translate is your friend.