Few have experienced the beauty of Spain's gravel backroads but 120 riders will soon be straight into the deep end. Brought to you by the organisers of TransIbérica and Transpyrenees, Badlands is about to light up the ultra-endurance world and leave dotwatchers in a cloud of dust. 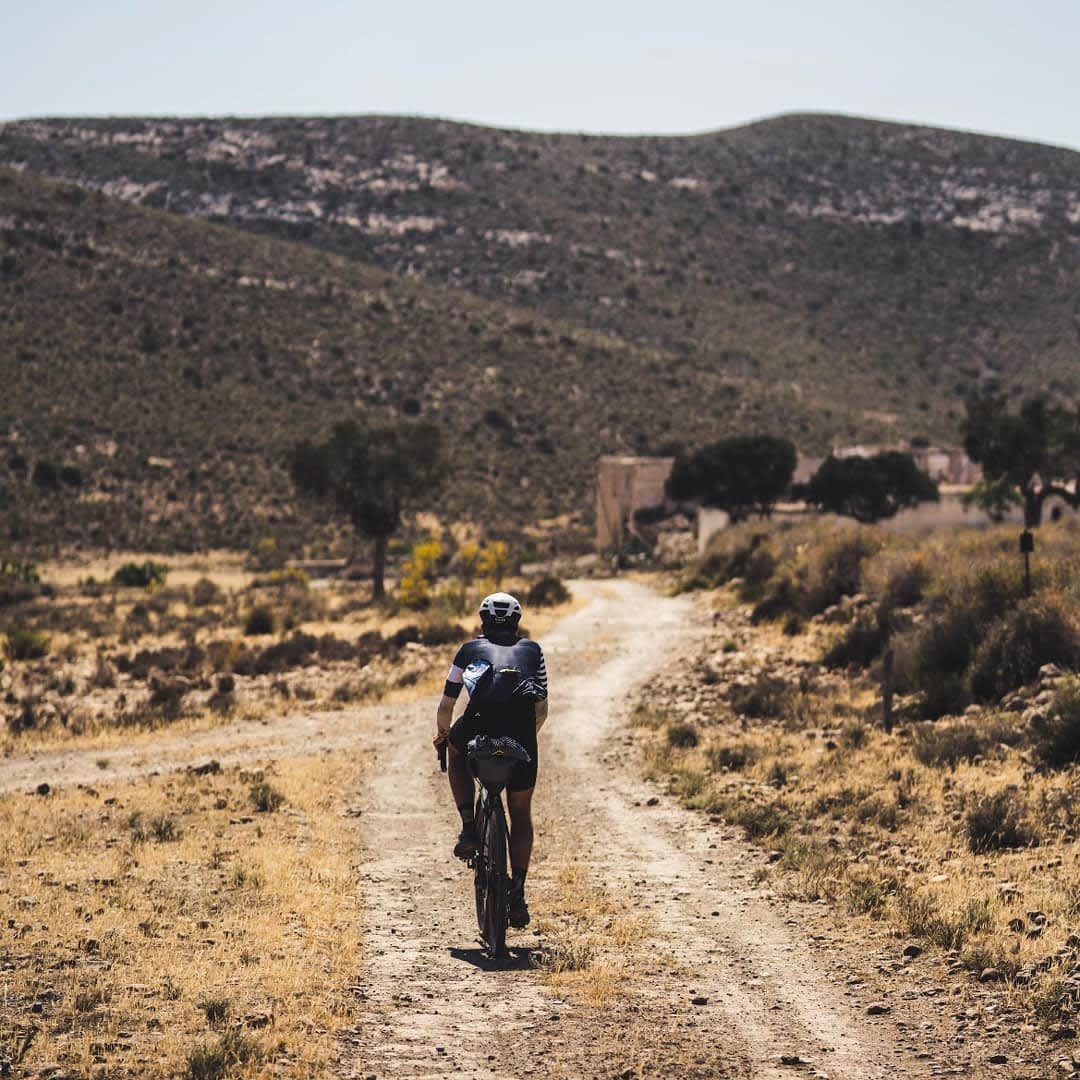 At just 700km, it's one of the shortest events on the calendar but make no mistake, this does not mean it's easy. Riders will be treated to 16,000m of climbing with most of it in the second half of the route.

Beginning and ending in the Spanish town of Granada famous for The Alhambra, a World Heritage Site and one of Spain's most visited monuments, riders have signed up for a grand tour of the Sierra Nevada mountains.

I'm beginning to think a limited calendar makes for even better dotwatching since all riders have to do the same races. Let's take a look at the start line shall we? Brace yourselves.

Over to you, Harry

Harry Griffiths will be bringing you regular updates throughout the race starting first thing tomorrow as the race gets going from 9am local time. Remember, if you'd like to commentate a race, all you have to do is get in touch.

At 9am local time, 81 solo riders and 20 pairs rolled out of Granada for the Inaugural Badlands 2020. The field is about as star studded as gravel ultra endurance racing can be, ranging from a World Tour rider to previous TCR winners.

The route they’re facing is 700km with 15000 meters of climbing, 85% off road and taking in some stunning parts of this area of Spain with a 5 check points. The ride to the first checkpoint at Hoya de Guadix is shown below. It’s pretty apparent the amount of climbing there is in this race; within the first 45km they will have to ride over 1000 meters of vertical. To add to this, despite the weather looking good by all accounts, the roadbook of the race does point out that “you’ll ride through deserts at temperatures close to 40º but also you’ll probably ride through snowfields and overnight close to 0º”.

Bike wise, it seems that most are riding gravel bikes, which is in keeping with the organisers recommendation of 40mm tyres. However, James Hayden wrote in his race preview that having tried a gravel bike he is going to be sticking to his hardtail. You can read more here:

A quick scroll through the socials shows that some riders have been out testing equipment and giving their bikes a final check over. Hippy has been having some tubeless issues and socially distancing at the riders briefing, Liam Yates has been out camping and Hayden McCormick and Lachlan Morton have been out for a short ride.

With a ton of unknowns, a beautiful route and a loaded field, this race is set to be a corker.

Lachlan Morton has just passed through CP1 at the Gorafe Desert. He has averaged just over 20kmh and has a time to the checkpoint of 7hr 24mins.

Just behind him is Hayden McCormick at 145km and Christian Meier at 138km.

Sonia Colomo is first women at 89km and in the pairs race, David Rovira and Ricard Calmet are up the front at 136km. 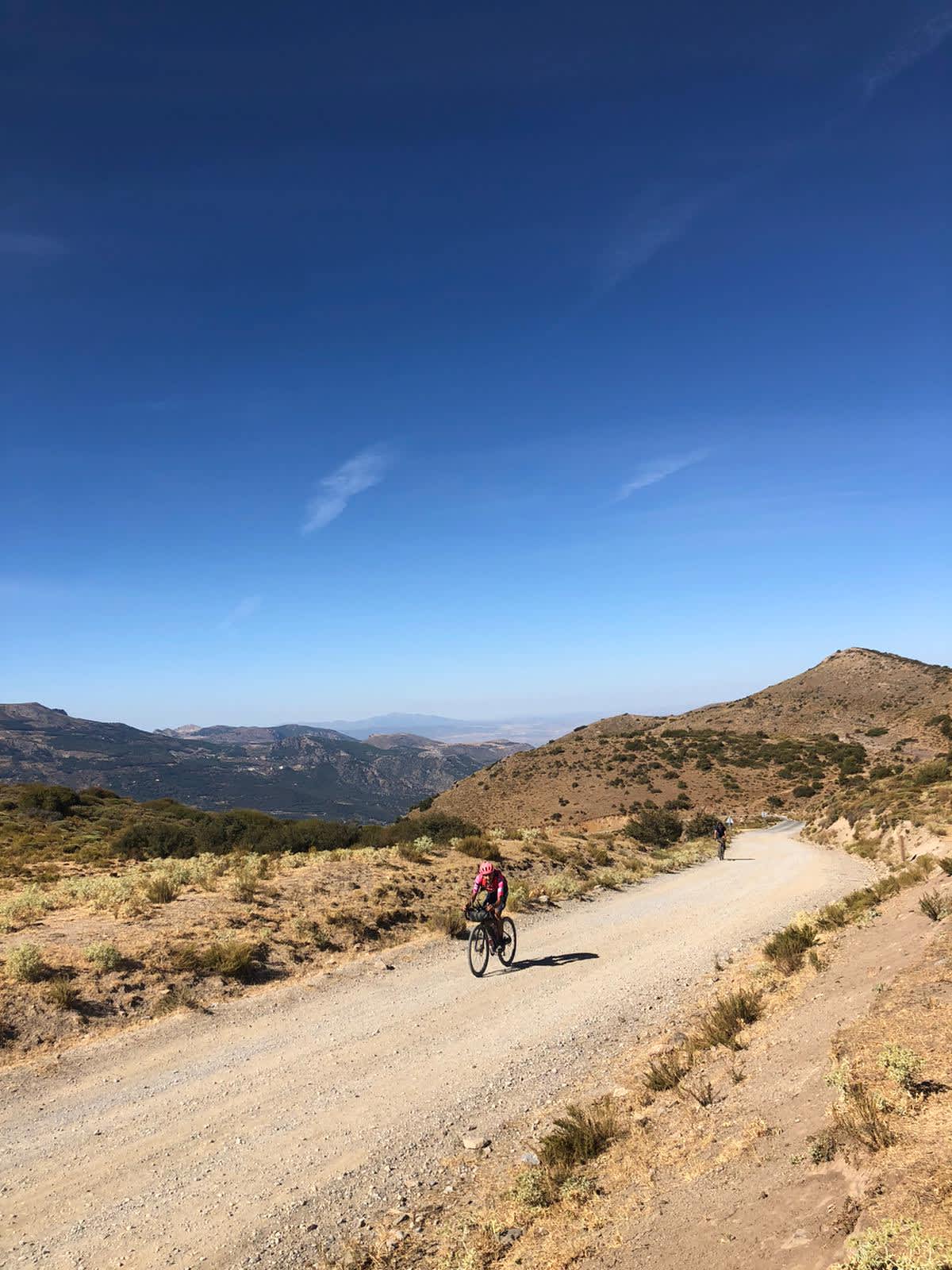 Lachlan climbing up and over the Collado Aguacil - thanks to the race organisers for the photo.

Into the Night - Day 1 Recap

As I rode around a damp wood in Southern England today, a couple of thousand miles away some of the best ultra endurance racers in the world took to the Badlands course to do battle with high altitude, temperatures up to 35 degrees and a lot of gravel. 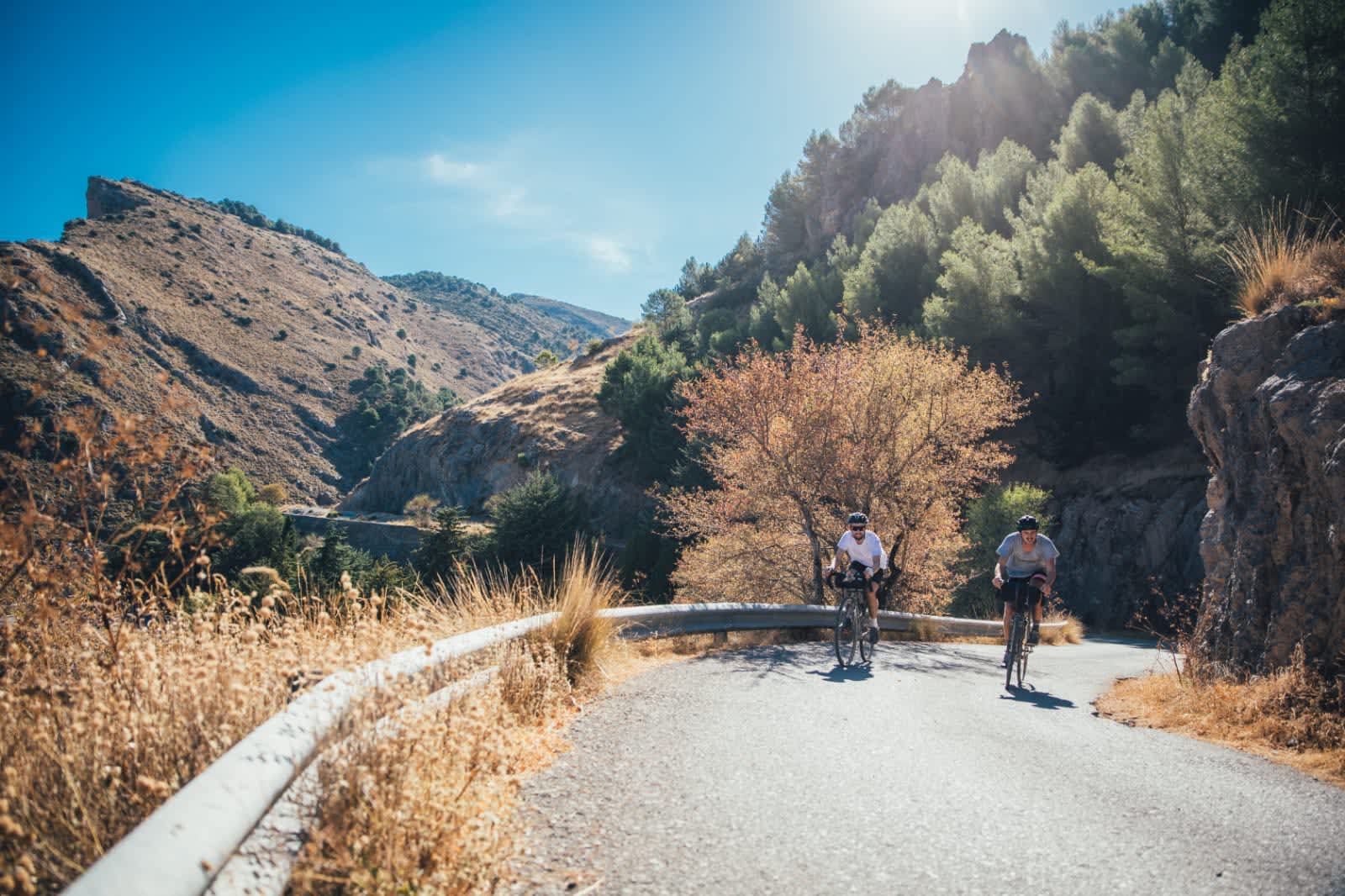 As is often the case with these races, the first part is always a period during which riders settle into a rhythm and as such, the lead of this race was changing hands constantly within in the first 30km. Hitting the biggest climb of the day spread the riders out, and it was Lachlan Morton and Hayden McCormick who were leading the way up the Collado Aguacil. Behind them Christian Meier and Toni Calderon were trading 3rd and 4th before Toni stopped around 80km, mostly likely to re fuel in La Peza. Further up the course, a lot of riders were stopping in Gorafe to re fuel, before tackling the final push to to CP1. From Gorafe to CP1 was the riders first taste of the Gorafe Desert. No doubt there were a lot of riders who had never rideen in this sort of area before, but from the pictures I'd imagine they're all having a hard time concentrating on the road.

(There seems to be a bit of confusion with the tracking, this top 10 is based on the segment time) 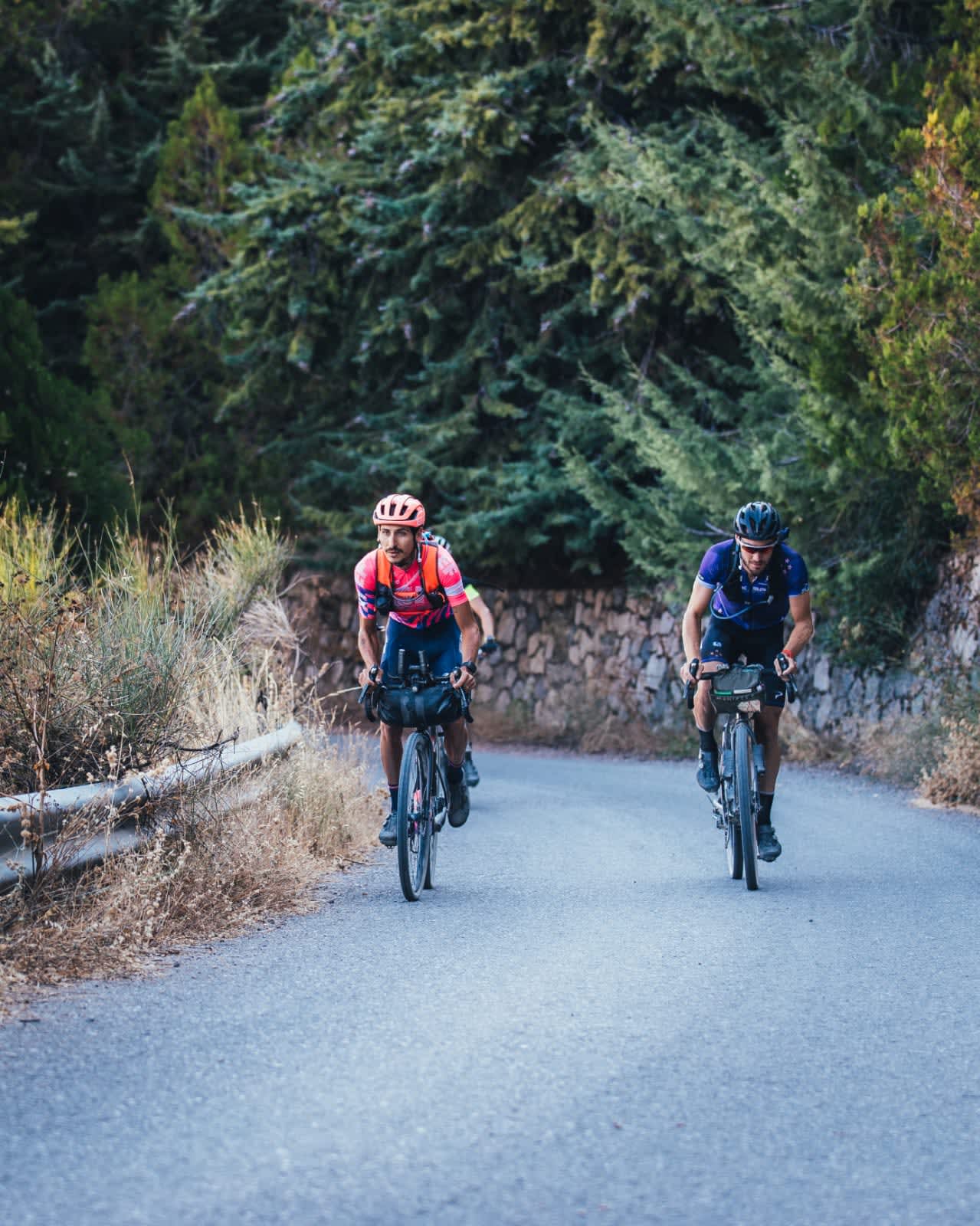 At 100km in, Sonia Colomo was riding as the first female rider on the course, closely followed by Yolanda Magallon and Yishuang Gao, at 92km and 89km respectively. At the time of writing Sonia Colomo was still leading the way at 118km, with Yolando Magallon just over 10km behind her. Yishuang was at 97km at this point.

In the pairs race, David Rovira and Ricard Calmet reached CP1 after 9hrs 11 minutes, and at the time of writing were the only pair to have made it. We're unsure the details of India Landy and Daniel Loftus, but it seems they had to head back to Granada due to wheel issues. Hopefully the get it sorted and are back on the course ASAP.

Jose Patrick Mothes has posted on Instagram giving his account of the first part of the route. https://www.instagram.com/p/CEy_jl0qCab/

With the top riders already into the ride to CP2, here is what they will be encountering. Riding back through the Gorafe Desert, they then head to Sierra de Baza, where they gradually climb to around 2000 meters. They stay at this height for around 50km, meaning that altitude will become a big factor, if it wasn’t enough one already, before dropping out of the Sierra De Baza to CP2 near Fuente Santa. At this sort of height at night, the temperatures will probably be close to zero so it could mean a very cold night for some of the front runners. 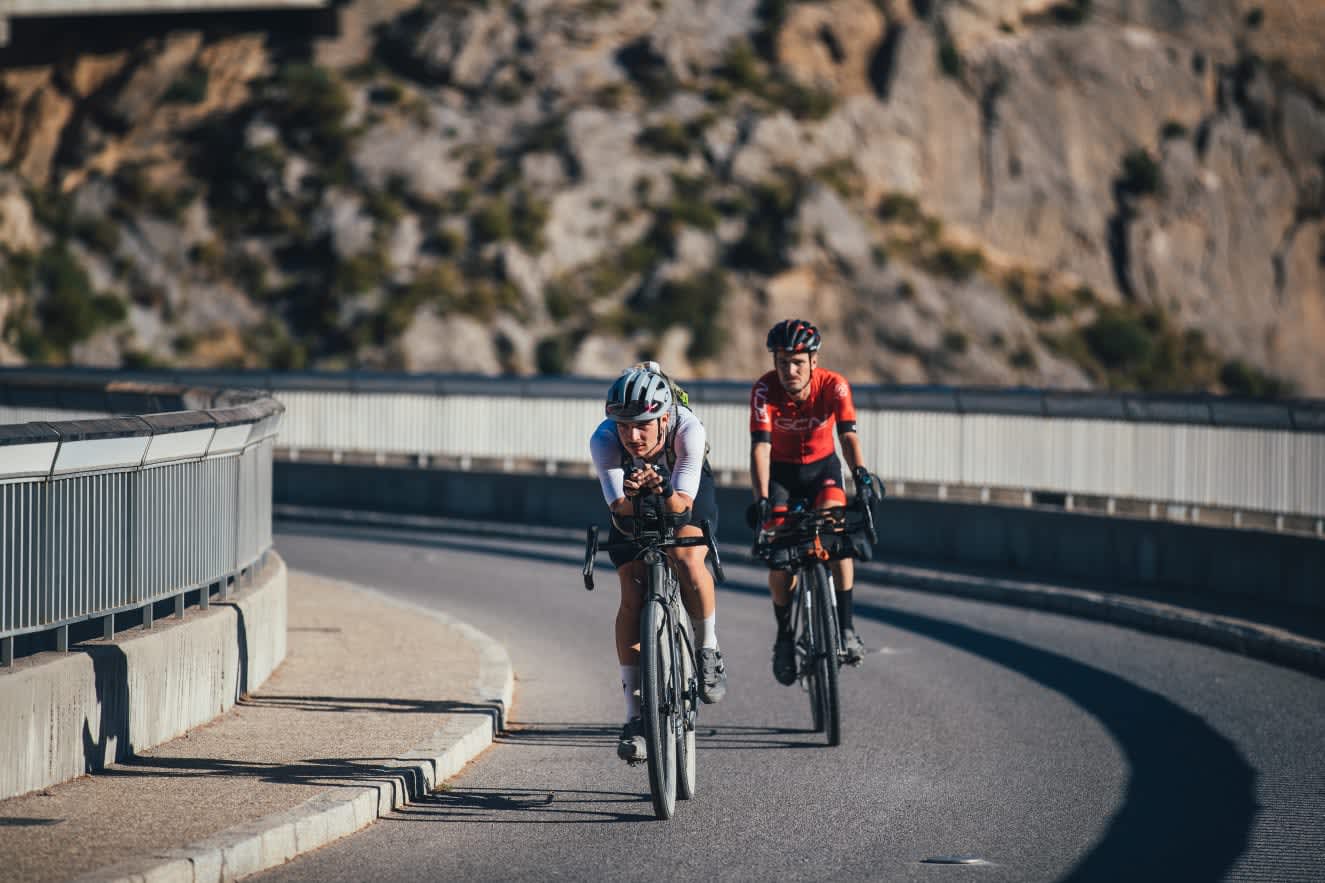 Heading into the evening, Lachlan is still leading, around 10km in front of McCormick and, alongside the pair of David Rovira and Ricard Calmet, are the only riders to have left the Gorafe Desert behind. Will the pure ultra riders be able to catch Lachlan during the night or will he be even further ahead come the morning? Who knows, but what we do know is that we have a blinder of a race on our hands.

Hayden & Ysihuang trackers are moving again so it would be assumed that they haven't scratched at this point.

It would appear from the tracking that Hayden McCormick and Yishuang Gao have scratched. They were both last seen on the tracking 1 hour ago and both tracker icons have been faded out. This is unconfirmed at the moment but we will update as soon as we have more.

Hayden was 2nd on the road, and Yishuang was the third women on the road.

Overnight, Lachlan Morton has been having a stormer of a ride. He made it to CP2 at the Tabernas Desert and CP3 at Cabo de Gato and is currently heading along the coast towards CP4. We're not sure how much, if any, sleep he got, as he has been riding for just over a day at this point and has only been stopped for around 15 minutes. He currently leads Hayden McCormick by around 100km. Lachlan is the only rider to have made it to CP3.

Others have used the night to thier advantage, with Hippy, who seems to have surpised himself with his ride, moving up to 6th and being one of a few riders who have made it to CP2. Somewhat surprisingly both Christian Meier and James Hayden have slipped back overnight, and are now towards the middle of the pack.

David Rovira and Ricard Calmet are still leading the way in the pairs race, having passed through CP2 and currently heading to CP3.

Sonia Colomo has ridden well overnight, moving up to 16th place, and curently leads the next women on the road, Theresea Sundstrom by over 50km.

In general, the riders are spread out evenly across the course, but the biggest concentration is still in the Gorafe Desert, with most people having made CP1 the aim for the first day, and then settled down for the night.

With the exception of Lachlan, most riders are heading for CP2 or CP3 today. The route from CP1 to CP2 was in a previous post, so here is CP2 to CP3.

The checkpoint comes around the Cabo de Gato. An incredible mix of volcanic rock formations, adbandoned villages and and fossil beaches await the riders.