Almost 100 riders have now made it to the finish line of this year’s TCR, and from 7pm tonight, almost all of them will be in one place: the finishers’ party at Restaurant La Paillote.

For the duration of the party, the official finish line will move to the steps of the restaurant – meaning all the riders still making their way towards Brest will enjoy a considerably bigger welcome on their arrival.

Congratulations to everyone who made it, and to all those still out there battling on towards the end.

The TCRNo7 party will be held at Restaurant La Paillote which is the restaurant located on the square at the end of the finish parcours from 7pm tonight 11/08/19. The TCRNo7 finish line will move from the Auberge de Jeunesse (coordinates: 48.394322, -4.435686) to Restaurant La Paillote, 18 Rue du Moulin Blanc, 29200 Brest, France 48.395471, -4.434611 for the duration of the party from 7pm today, Sunday 11th August, to 12.00am [Midnight] Monday 12th August 2019. Riders arriving between 7pm and 12.00am [midnight] will find the finish at the end of the parcours. Riders arriving after 12.00am [midnight] will find the finish of the TCRNo7 located at the Auberge de Jeunesse (coordinates: 48.394322, -4.435686). Please bring your cap. The Transcontinental Race party is always as low-key as the finish line so buy each other a beer and there are plenty of restaurants around if you want to eat before. 📷 @jprobertson ⁠ #TCRNo7 #TCRNo7riders⁠ @apidura #NoBadDays

Day 15: While we were sleeping

Xavier Massart’s finish last night takes our total up to 51 riders who’ve made it over the line. There’s seven more caps closing in on Brest at the time of writing – including pair Michal Durec (Cap 249a) and Zlatima Petrova (Cap 249b) – and a whole load more making their way west. 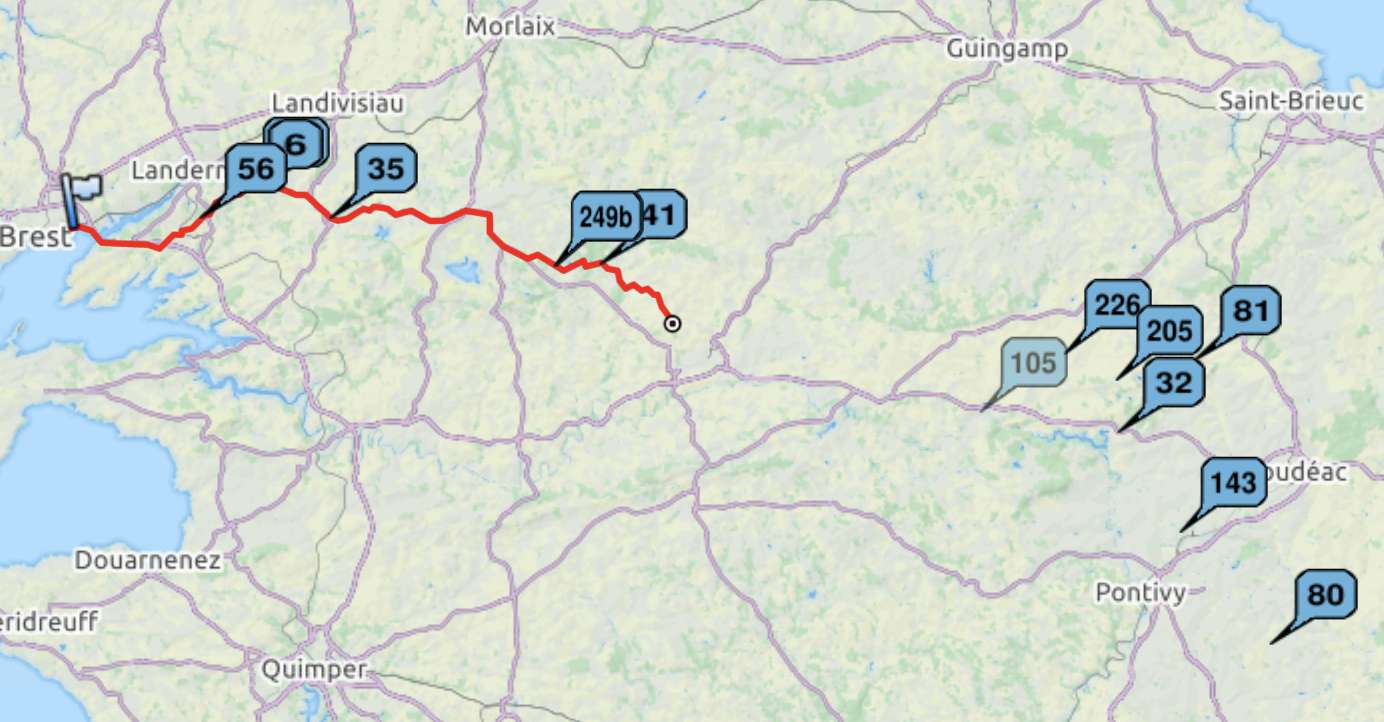 For many, realisation of their continent-crossing accomplishment will be slowly sinking in ahead of the finishers' party on Sunday. Here’s Lloyd Williams’ emotional insight into what it takes to complete the TCR (plus some tips on doing it inside two weeks):

Jesus, did I just do that! I set myself a goal 10 months ago to cycle from Bulgaria to France in the #tcrno7. With one thing in mind and that was just to finish within the timeframe of 15 days and make it to the finishers party. My strategy: to cycle the minimum 300 kms with the expectations of cycling more, if you find yourself in a good position to bank up kms due to favourable conditions, reward your efforts with a hotel, manage your mental state with a shower and good quality sleep. 5 hours in a bed is better than 5 hours on the ground outside and your physical state thanks you also. You physically don’t get better over time but there was not a day that I didn’t want to get back on the bike and ride. My strategy worked and I can now say I’m a finisher of the @thetranscontinental. I clocked in yesterday in 13 days, 16 hours, 45 min and in 43rd place out of 275 riders. I have now set myself a baseline, I now know I can go further, push harder and compete in one of the hardest races in the world. Thank you to all the riders on the road it’s just good to see another struggling face from time to time. Lol. Thank you to everyone who supported me Over the past 10 months and the countless messages of encouragement, they meant a lot through the tough times and there were a lot of them. I hope my story provided you with lite entertainment. Enjoy life, Do what makes you happy. Thanks. #tcrno7cap149 #tcrno7riders #jobdone

Day 14: While we were sleeping

Our finisher total is now at 30, following the arrival of Gail Brown this morning. There’s plenty more riders lined up outside Brest and the final parcours so expect that number to grow by at least another ten throughout the day.

Back in Italy and CP3, Helen Proudfoot has scratched – succumbing to the saddle sores and stresses of the race that slowed her progress earlier in the week. Congratulations on a strong ride, Helen. We’re sure we’ll be seeing your dot again.

Scratching post I want to say a huge thank you to everybody! To all the TCR crew for putting together an amazing race, waiting out in the freezing cold and boiling heat to check us in and keep us smiling. To all my fellow TCRrs. I know we weren't allowed to share a packet of crisps, but it really was a massive linear community of loveliness. To all the bemused locals, for their support, and for giving me tissues when I was crying, homemade lemonade when I was boiling, and a slightly limp cucumber. (No, I'm not sure about that last one either.) To everyone who has sent messages, cures for saddle sores or a picture of a baboon covered in spaghetti - usually when I was most in need! I look forward to being around a bit more when I get back to catch up! To @abittiner for giving me the bike way back when, and all his support. To all the guys @seabasscycles for making the bike fit for TCR, to @jimmywak @condorcyles for making the bike fit me, and @richpips and the guys @alpkit for making bags to fit the bike. To the 1980s Peugeot, Claude-Philippe, who has shown he can take anything that's thrown at him - a proper adventure bike. He could have finished, for sure! And most of all to @cycling_bear who talked me into this. The conversation went something like this: "You should do the TCR." "Ok." #tcrno7 #tcrno7cap231

Congratulations, Matthew Falconer. His arrival now marks the completion of our top 20 leaderboard for this year’s TCR. It's also his fourth appearance in the race, which is surely worth another congratulations.

Behind him and currently on the final parcours is cap 222, Tanja Hacker. She's roughly two hours’ riding from the finish line and securing her spot as second place female in the women’s category. 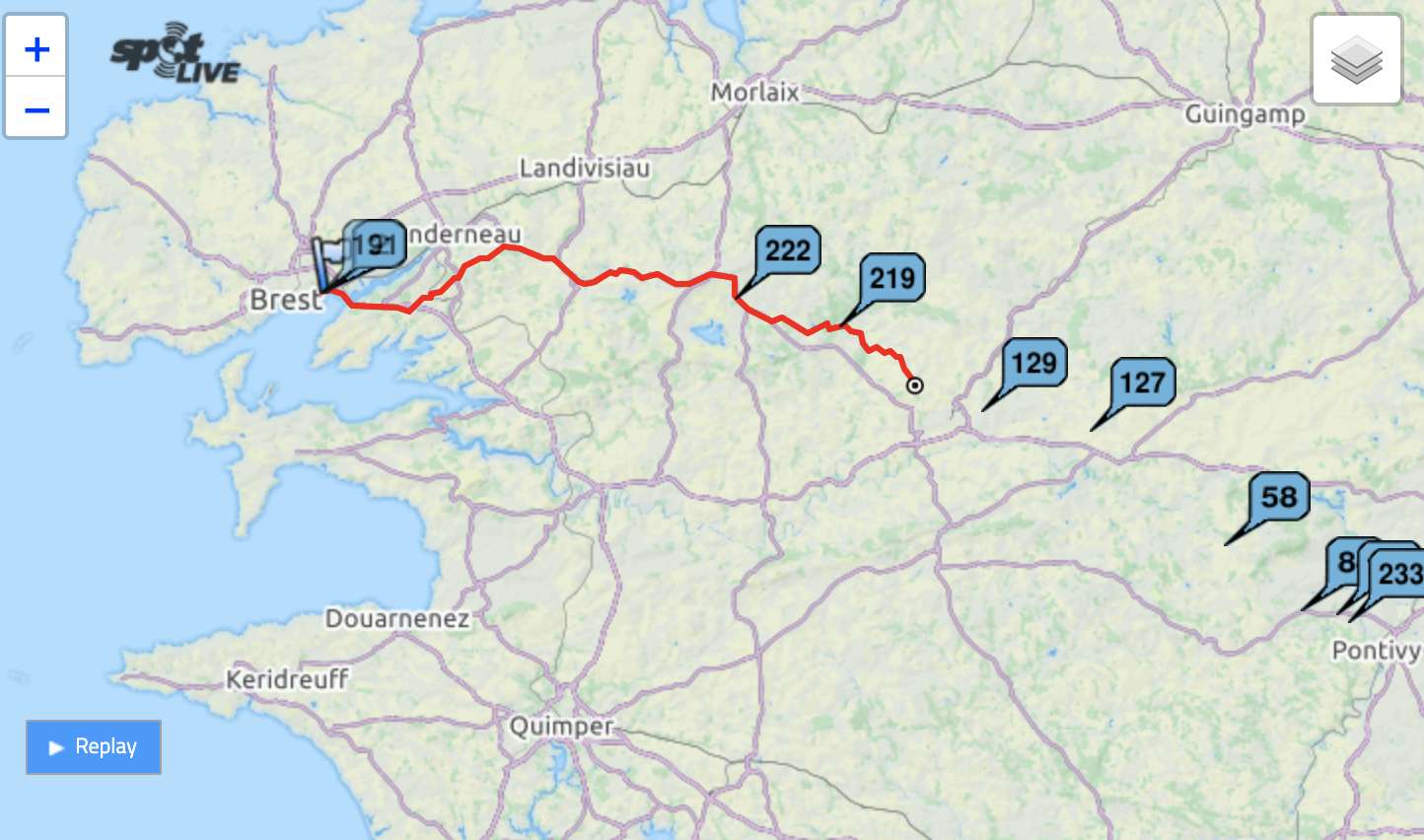 Day 13: While we were sleeping

Overnight, Theo Daniel and Stephane Ouaja rounded out our top ten, finishing four hours apart at around 9pm and midnight respectively. Daniel Nash rode into the early part of the morning to finish at around 3am, while Sam Thomas is our latest finisher, crossing the line just 30 minutes ago.

Finishers will come thick and fast today, with three riders already riding the parcours, and a group of three more just 40km away. 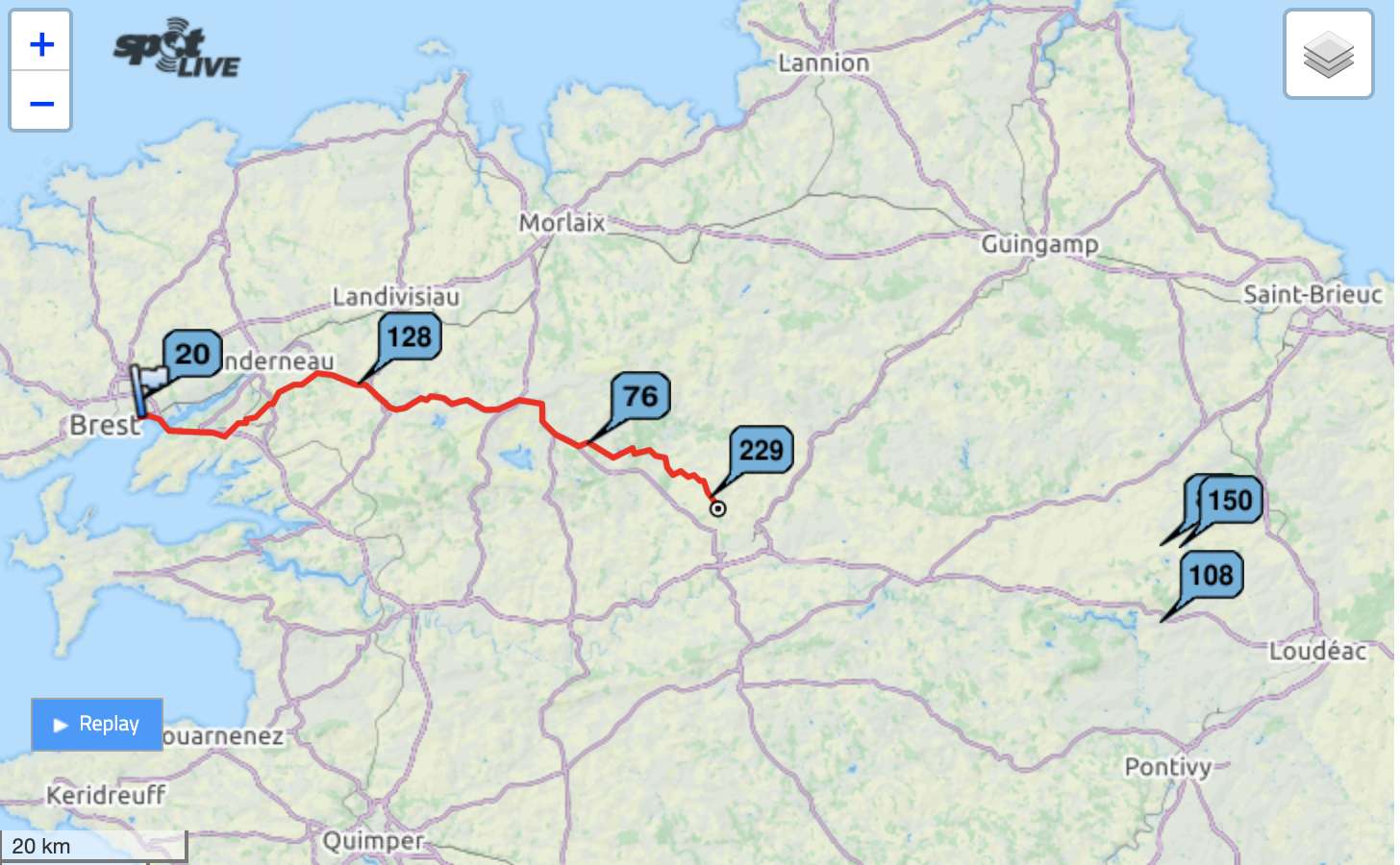 Back in Switzerland, Niel Copeland makes his way towards CP3 having completed the mandatory parcours. The riding may be tough, but he’s being treated to some spectacular views of the surrounding mountains:

Later tonight, CP4 will close, leaving remaining racers less than three days’ riding to cover the 1,100km across France to Brest in time for the official end of the competition and finishers’ party on Sunday. Best of luck to all those still riding – we’re wishing you tailwinds, sunshine, and warm bivvies.

Despite having ridden more than 4,000km across Europe, the difference between seventh and eighth place came down to mere minutes for Alex Jacobson and Danny Green, with the pair finishing just 44 minutes apart.

Alex told race organisers at the finish in Brest:

“I’ve never been so wrecked… for the last 20km I’ve been sprinting to stay ahead of cap #9. We have been racing each other for the last 2 days.”⁠

Congratulations on a top ten TCR, Alex and Danny. And kudos for maintaining your racing spirit to the bitter end.